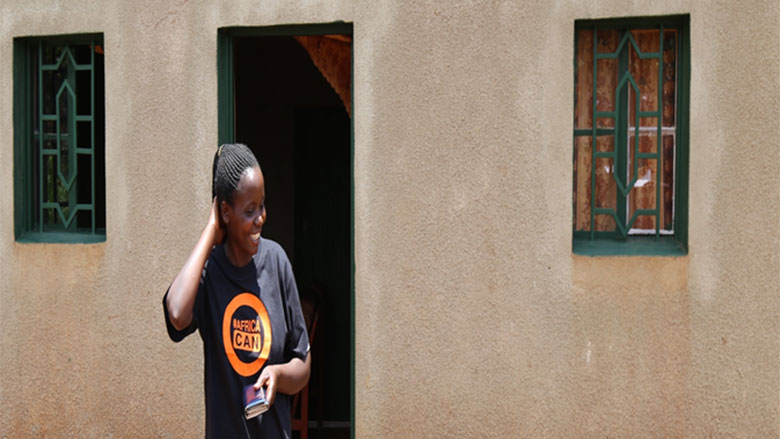 Mukagasana Gaudance of Nduba Sector is one of the thousands beneficiaries whose life was transformed by the VUP project.

Starting from small and fragmented social support interventions a decade ago, Rwanda has developed a nationwide social protection program entitled the Vision 2020 Umurenge Program (VUP) to eradicate extreme poverty by 2020. With the support of the World Bank and other development partners, the VUP has been expanded, currently reaching over a million beneficiaries, over 50% of whom are female.

Small and landlocked, Rwanda is hilly and fertile with a densely packed population of about 12.5 million people (2018).  The country’s recent growth and poverty reduction experience has been remarkable. Two decades ago Rwanda was one of the poorest countries in Sub-Saharan Africa; today its per capita income (around $800 as of 2018) places it ahead of more than 20 countries in the region thanks to the second highest economic growth rate on the continent. Poverty rates defined by the international poverty line of $1.90 a day have fallen from 77.2% in 2001 to 55.5% in 2017. Yet the challenges of reducing extreme poverty and increasing shared prosperity are enormous. Poverty has been less responsive to growth than in other strong performers on the continent.  While Rwanda has made strides in human development, particularly in areas such as health and gender equality, its Human Capital Index of 0.37 is below other comparable income level countries, mainly due to a high level of under-five stunting rates (38%), a high dropout rate, and poor quality of learning. Thus, a critical priority for Rwanda is ensuring that growth is pro-poor.

Rwanda’s success stories in accelerating poverty reduction over the last decade is intertwined with a long-lasting World Bank engagement in Social Protection in Rwanda. The World Bank supported Rwanda’s Social Protection Flagship Vision 2020 Umurenge Program (VUP) from its infancy in 2009 through three Development Policy Operation (DPO) series, with a total funding of around USD 500 million. The DPO series which ended in December 2017 contributed to establishing a strong foundation for overall Social Protection policies, targeting and Management Information System (MIS), adoption of delivery systems and building up institutional capacities.

Following successful DPO series, the World Bank continues its support to the Social Protection sector through a new lending instrument, the Investment Project Financing (IPF). The project aims at improving efficiency, strengthening accountability and transparency, and introducing new Social Protection interventions to boost Human Capital, particularly in relation to the ambitious nutrition and Early Childhood Development Government goals. These interventions are supplemented by several additional resources mainly in the form of Analytical Work and Technical Assistance to reinforce the evidence base and promote learning and institutional strengthening in key areas (Early Childhood Development, Nutrition, livelihoods enhancement, Monitoring and Evaluation) of the overall program. Through the Conditional Cash Transfer (CCT) component of IPF, the project incentivizes the uptake of the health and nutrition services (demand side) while another complementary project, the stunting reduction project ensures availability and quality of those services (supply side).

International Development Association (IDA) is Rwanda’s largest provider of official development assistance. As of September 2, 2019, the World Bank Group's portfolio in Rwanda consisted of 16 national projects with a net commitment of $1,249.77 million. Rwanda also participates in five regional projects worth a national commitment of $255.25 million. Project objectives have ranged from providing access to basic infrastructure and enhancing urban management in selected urban centers, supporting the strengthening of the social protection system, reducing stunting, and providing electricity to rural households.  The World Bank has provided more than half a billion dollars in IDA funding to the social protection sector since its inception in 2008, through both Development Policy Lending and Investment Project Financing. Additionally, in the framework supporting human capital challenges, the World Bank is leveraging the investments already made in social sectors through new IDA funding and grants commitments close to half a billion in education, health and cross sectoral development policy lending for human capital.

Additionally, the International Finance Corporation -IFC’s program in Rwanda covers four main areas; capital and financial markets development; infrastructure and natural resources; manufacturing, agribusiness and services, as well as investment climate reform. As of June 2019, IFC’s investment portfolio is worth $70 million and $14 million in advisory services. To further encourage investment, IFC co-hosted the Africa Chef Executive Officers (CEO) Forum on March 25-26, 2019 and is working to bring investors from around Africa and the world to look closer at investing in Rwanda. IFC recently concluded the country private sector diagnostic and have identified agribusiness and housing as its priority focus areas going forward. The Multilateral Investment Guarantee Agency (MIGA) currently has one active project, KivuWatt, with a total gross exposure of $95.4 million.

Specifically, in the social protection and health sectors, IDA financing is currently supplemented by grant funding from the Power of Nutrition and the Global Financing Facility (GFF) to finance an integrated program to combat chronic malnutrition, with a focus on districts with high-stunting rates, vulnerable populations, and the critical 1,000 days beyond which stunting becomes largely irreversible. The Power of Nutrition provided $35 million (including from the private sector), and the Global Financing Facility contributed $18 million to the overall program to supplement $80 million of IDA funds. The World Bank coordinates mainly with United States Agency for International Development (USAID), United Nations International Children's Emergency Fund (UNICEF) and Department for International Development (DFID) on this program.

The World Bank Group’s Country Partnership Strategy with Rwanda will end in Financial Year 20 (FY20). Preparations for the new Country Partnership Framework (FY21-FY25) is currently underway and draws on the WBG Systematic Country Diagnostic conduced in 2019 and the joint Rwanda /WBG report on the future drivers of growth and the National Strategy for Transformation. These documents identify investing in human capital, developing markets and the private sector, investing sustainably, and building resilience as the priority areas for Rwanda to ensure sustainability of economic growth, poverty reduction and shared prosperity. The upcoming World Bank  Rwanda Country Partnership Framework will jointly identify areas of future stronger engagement.