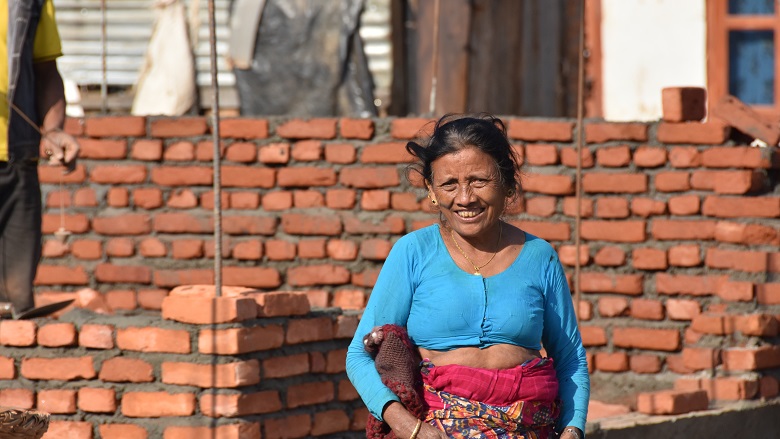 The Nepal Earthquake Housing Reconstruction Project (EHRP) extensively used technology solutions to assess post-earthquake housing damage to determine beneficiaries’ eligibility for receiving housing reconstruction grants, enroll beneficiaries, and track construction quality inspections post the 2015 earthquake. The geo-referenced data included detailed socio-economic household profiles and building typology. Of more than 715,000 eligible beneficiaries identified in 14 most affected districts, 26 percent households were headed by women. As of August 2019, 680,000 households have enrolled into the program of which approximately 397,000 houses have been fully reconstructed, and about 178,000 houses are under construction.

On April 25, 2015, Nepal experienced a 7.8-magnitude earthquake, followed by more than 460 aftershocks, which caused around 9,000 casualties. A Post Disaster Needs Assessment (PDNA) and Post Disaster Recovery Framework (PDRF), led by the government of Nepal, underscored the biggest need and associated challenges in ensuring safer housing reconstruction for around 715,000 houses that were destroyed or severely damaged with over $3.5 billion estimated for housing reconstruction. Through the Earthquake Housing Reconstruction Project (EHRP), International Deveopment Association (IDA) agreed to support the government of Nepal (GoN) in giving housing grants for multi-hazard resistant reconstruction, that entailed providing technical assistance to house owners and institute a regime of quality inspections to ensure safety of the reconstructed houses. As housing grants were to be paid to almost three-quarters of a million beneficiaries, mostly in rural areas, ensuring transparency and accountability, balanced with efficiency, became critically important. Further, enabling the most marginalized and vulnerable, especially women, to access housing grants needed innovative measures. Distribution of cash grants posed transparency and accountability challenges, and carried security risks as well.

During the damage assessment survey, the project used tablet-based data collection applications, whereas the collected Geographic Information System (GIS) referenced data is hosted in a web-based Management Information System (MIS). The MIS is used in beneficiary verification as well as grievance redressal. Beneficiaries signed Participation Agreements (PA) with the GoN, which were digitized. A multi-staged inspection regime to support seismically safe reconstruction was introduced and digitized through tablets and web-based applications. All the inspection forms are signed by two government engineers. The project supports the National Reconstruction Authority to use social media to reach out to beneficiaries, the general public, and field engineers to communicate about safer reconstruction. In order to ensure proper documentation, transparency, and accountability, the housing grant was transferred through commercial banks, thus facilitating all beneficiaries in opening bank accounts.

The results achieved so far:

The project is being administered by the GoN, through its National Reconstruction Authority. A multi-donor trust fund has been set up to enable donors to coordinate their finance for housing reconstruction. This is in alignment with the EHRP, and includes contributions from the governments of Canada, Switzerland, the United Kingdom, and the United States. Japan International Cooperation Agency (JICA) has provided a parallel financing of $100 million, while following the EHRP procedures, whereas Government of India is providing a parallel financing of $150 million, both following the EHRP procedures.

The Project aims to enhance the government’s ability to improve long-term disaster resilience through a country-wide Structural Integrity and Vulnerability Assessment of Social Infrastructure (School and Health posts). The geo-referenced vulnerability data collected through this exercise will be used to develop a comprehensive portal to help policy makers and concerned stakeholders at all the three tiers of Governments in order to take risk-informed decisions regarding interventions on social infrastructure. In addition, Disaster Risk Management capacity-building of local governments and the transfer of both soft and hard records are being planned for 14 earthquake affected districts.

“The process of receiving NPR 300,000 housing grant in installments was a life changing experience as it enhanced my mobility, self-confidence, and awareness by having to interact with government functionaries and project staff. I feel more informed as I attend meetings and trainings, and I’m an active member of the community women’s group.” -- Bimala Tamang (40) – a mother of three – was spending her life looking after household chores. After the earthquake, she and her husband rebuilt their house that she now jointly owns with him. For Bimala and many other women, housing reconstruction has enabled them to break away from social constraints.