Indonesia: Expanding Access to Clean Water for the Rural Poor 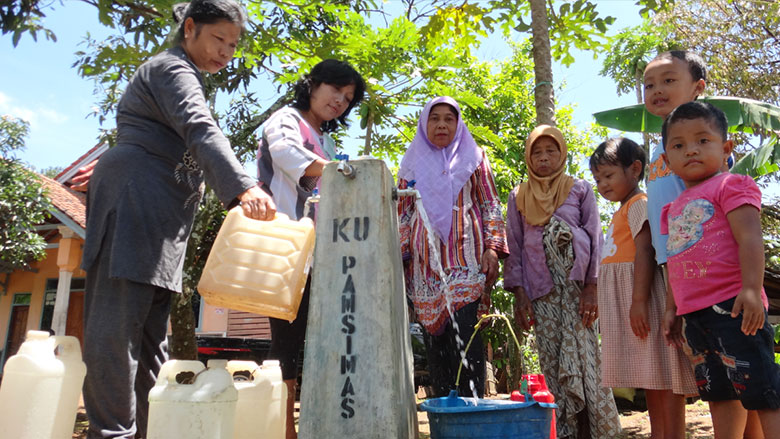 Access to clean water has helped Indonesian women and children put better use of their time since they no longer have to walk far to fetch water.

Improving access to safe water and sanitation is a key priority, due to the consequences of poor sanitation infrastructure on public health and the environment. Of the four main causes of under-5 mortality in Indonesia, two—diarrhea and typhoid—are fecal-borne illnesses linked to inadequate water supply, sanitation issues, including open defecation and lack of proper toilets, also poor hygiene practices. Difficult access to improved water supply also means that poor households spend too much time fetching water. Delivery of services in the rural areas has its specific challenges, including the large number of villages across the archipelago, governed under 514 local governments with different cultures, levels of capacity and resources.

PAMSIMAS aims to increase the use of water and sanitation facilities, and improve hygiene behaviors, by expanding and mainstreaming the community-driven approach. The project provides grants directly to communities for local water and sanitation infrastructure and technical assistance to enhance the role of the community through capacity building, planning, procurement and management, including community monitoring with a web-based and mobile monitoring system. Consultancy services and training are also provided for facilitators and communities to improve their sanitation and hygiene behavior and practices.

The success of PAMSIMAS relies on strong collaboration between the key partners in the water and sanitation sector in Indonesia. The central government of Indonesia contributed $537.4 million and the local governments across Indonesia supported through regional budgets, a sharing program (replication), support for the preparation of local action plans for water and sanitation sector all these help to ensure the project’s sustainability. In addition, the Australian government contributed $102 million.

“Before 2014, I used brackish water from drill wells and shallow wells in my village. When it’s the rainy season, I used rainwater. Sometimes I buy water from a local water supplier truck. Brackish water is only for washing kitchen utensils. If I use it for bathing, my body feels sticky. After PAMSIMAS built pipelines and water meters in my village, I am very comfortable and find it easy to get clean water for any need,” said one resident of Pitusungu Village, Pangkajene Kepulauan District, South Sulawesi.