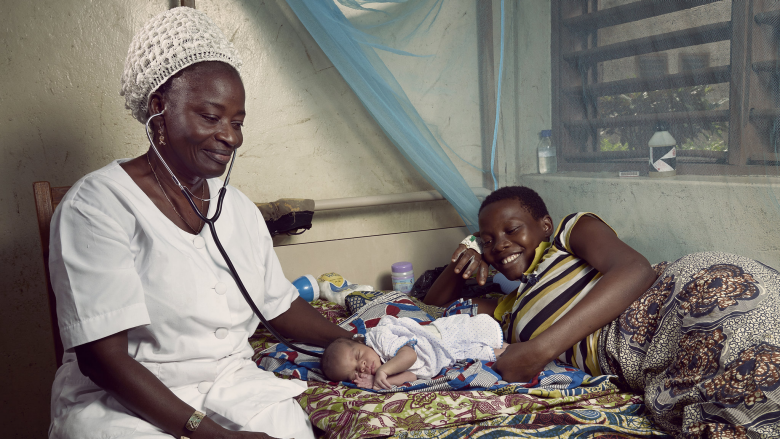 Antoinette Sossa Epse Adoco, a nurse at a health center in Athiémé, a city in southwest Benin, examines a newborn beside the proud mother, Matilde Tchito. Matilde is 20 years old, and this is her second child. Photo: © Stephan Gladieu / World Bank

With a policy-based guarantee, The World Bank Group helped Benin to attract private financing, restructure its debt to more favorable terms and free up domestic resources for critical improvements.

In Benin, poverty is persistent: Nearly half the population lives on less than $1.90 per day.  Development progress in the country is uneven: In some rural areas such as Aplahoue-Diakotomey-Dogbo, there are as few as two health workers for every 10,000 people. In Kandi and Atacora, there is just one teacher for every 116 students. Further, a weak business environment deters investment and slows growth.

The World Bank Group supports the government’s development plan, which recognizes the need for investments in human capital, infrastructure, and the power sector. But for the government, executing this plan requires stepping up public borrowing from domestic sources, sometimes at expensive terms. Benin is grappling with a challenge facing many developing countries - balancing the cost of improvements its people need with keeping debt levels at sustainable levels.

The World Bank Group was able to provide The Government of Benin with an innovative solution to the complex challenges it was facing. In line with the Maximizing Finance for Development (MFD) approach, this operation leveraged $60 million in available International Development Association (IDA) funds to generate access to much larger amounts of commercial funding.

This was accomplished by using a policy-based guarantee (PBG), in which The World Bank Group covered private lenders against the risk of debt default by the sovereign government. This backing by the World Bank Group enabled Benin to access international financing at convenient terms and helped the country to successfully reprofile its debt.

This is the first time in World Bank Group history that a policy-based guarantee was leveraged to back a commercial loan in Africa.

Here is how it worked:

After restructuring its debt with commercial financing, Benin will save $44 million over the 12-year life of the loan.

The World Bank’s PBG used only $45 million of IDA funds to secure commercial loans for $450 million at favorable terms. This amounts to approximately 5% of Benin's GDP in 2017. The remaining $15 million in IDA funds was used for other purposes.

Debt Restructuring
In September 2018, The World Bank Group and Benin completed the first tranche of this operation, where $30 million was used to help Benin secure a $300 million commercial loan from Japanese bank MUFG. This process was very fast – it only took six months from concept note to disbursement.

Benin used the $300 million commercial loan to significantly improve its debt position. It replaced short-term commercial debt that cost more than 7% annually with commercial financing over a 12-year period and a lower interest rate (about 4%). This will save Benin $44 million over the life of the loan, freeing up domestic resources to finance other development challenges.

The policy measures supported by this operation are helping the country to tackle development challenges other than its public debt. Following this project, The Government of Benin made key changes in the power utility to ensure more reliable electricty, a significant investment barrier for the agricultural processing sector. On health and education, the government has plans to increase the number of teachers and health workers in underserved areas.

"We’ve just completed the first international financing with a private investor support of the World Bank—for an exceptional operation that will lower the cost of the debt burden and enable us to strengthen our commitments to priority social spending."
Romuald Wadagni
Minister of Finance and Economy, Benin

The operation builds on close collaboration with the International Monetary Fund (IMF). Both the World Bank and IMF teams are aligned in supporting measures that will strengthen Benin’s fiscal and debt sustainability and help remove obstacles to inclusive growth such as bottlenecks arising from an underdeveloped human capital and limited private sector development. Together, the World Bank and IMF are focusing on strengthening private sector development by improving the business climate and preserving Benin’s debt sustainability through a medium-term debt management strategy.

The Second Fiscal Reform and Growth Development Policy Financing is the second in a series of two with Benin. This project is an excellent example of MFD at work and could be replicated in other countries with appropriate macroeconomic preconditions. Following the successful completion of the operation in Benin, several African countries reached out to discuss the possibility of preparing a PBG with the World Bank. As more countries pursue similar operations, it will be key to mitigate any potential debt-related risks posed by the typically large size of PBGs by regularly assessing debt sustainability of each country in collaboration with the IMF.

Benin’s Minister of Finance and Economy, Romuald Wadagni, says the IDA policy-based guarantee was a historic “milestone” for the country. “We’ve just completed the first international financing with a private investor support of the World Bank—for an exceptional operation that will lower the cost of the debt burden and enable us to strengthen our commitments to priority social spending.”