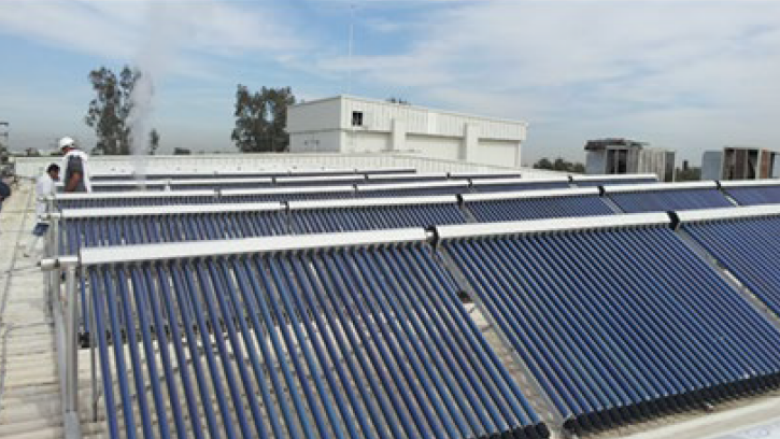 Starting in 2009, the blended Global Environment Facility (GEF) grant and World Bank loan Sustainable Rural Development project (FIRCO) promoted adoption of environmentally sustainable technologies in agribusinesses throughout Mexico. By the end of the project, 1,842 agribusinesses had adopted 2,286 improved renewable energy or energy efficiency technologies. This transition to improved energy technologies resulted in an overall reduction of 6.02 million tons of carbon dioxide emissions, representing a savings of 382.14 kilowatt hours of energy and a major contribution toward Mexico’s international agreements on emissions reductions.

In 2009, the solar market in Mexico was nascent and renewable energy and energy efficiency technologies were out of the reach for even medium-sized or large farms. Energy, an expensive input into agricultural production and transformation, hindered the growth of small- and medium-sized businesses. In addition, agriculture was a significant source of greenhouse gas (GHG) emissions, representing 7 percent of Mexico’s total emissions, mostly due to the use of inorganic fertilizers and anaerobic decomposition of organic materials. Together the government of Mexico and the World Bank sought a way to bolster the growing solar market, make sustainable technologies more accessible to farmers, and lower agricultural GHG emissions. The strategy selected was to promote competitiveness and environmental sustainability of agriculture through energy efficiency use of renewable energy and biomass technologies.

The Bank and the government of Mexico agreed to work through FIRCO, a decentralized agency of the Ministry of Agriculture (Secretaria de Agricultura, Ganaderia, Desarrollo Rural, Pesca y Alimentacion, or SAGARPA at the time). The project provided matching grants through subprojects to agribusinesses on a demand-driven basis. FIRCO had offices throughout the country and was able to hold promotional events and provide targeted technical assistance for the development of proposals and implementation of subprojects. Open calls for proposals helped to identify interested small- and medium-sized agribusinesses, and FIRCO helped beneficiaries do energy diagnostics and prepare business plans for integrating new technologies into current operations.  In its early years, the project was supported by a provision allowing private power producers (PPPs) to inject energy into the national grid and receive energy credits. In the project’s later years, agribusinesses benefited from the 2015 Law of Energy Transitions, which allowed PPPs to sell excess energy into the grid. Thus, through the instillation of energy efficient and renewable energy technologies, agribusinesses saved money on inputs and made money on energy sales.

The project’s list of supported technologies included solar panels, solar thermal, biodigesters, turbines, and energy efficiency appliances (for example, efficient milk chillers). Although the project was largely demand-driven, FIRCO was also conscious of meeting goals for reducing GHG emissions, and in the early years it emphasized use of biodigesters, which eliminated two major contributors of GHG emissions: biodigesters contained the anaerobic digestion of manure, thus reducing methane GHG emissions, and their output (slurry) was organic fertilizer, eliminating the need for synthetic fertilizers.

Through a continually refined model, strong buy-in from the government, and demonstrated demand from farmers, the FIRCO project achieved several key results, contributing to Mexico’s overall development. These include:

The World Bank supported the original FIRCO project through an International Bank for Reconstruction and Development (IBRD) loan of US$50 million and a Global Environment Facility (GEF) grant of US$10.5 million. In November 2012 an Additional Financing was approved for US$50 million to scale up the investment component of the project, with emphasis on promoting the project’s most successful technologies: biodigesters, solar heating, and solar PV.

The government of Mexico and the Germany Development Agency (GIZ) have a strong history of collaboration on the use of solar technology in agriculture. During the implementation period of the project, GIZ contributed a solar market development study and regularly provided technical assistance to the government on different available solar technologies. In addition, the Food and Agriculture Organization of the United Nations provided invaluable technical support for implementing the project, including development of the baseline and final evaluation tools.

Beneficiaries of the project were small- and medium-sized agribusinesses working within Mexico’s agricultural production value chains, mainly fruits, vegetables, and dairy, beef, or pork livestock. The impact of these technologies can be shown through their impact on beneficiaries.

For example, in Neutla, Comonfort Mexico, Juana Zarate Zarate makes her living from the production of different types of cow’s milk cheeses.  Before the support from the project, she consumed 7,832 kgs of liquid propane gas (LPG) annually, with a cost of US$53,101 pesos annually (roughly the equivalent of US$2,760).  The project helped Juana to install a solar thermal system to substitute the need for LPG in the cheese pasteurization process.  The system has the benefit of eliminating GHG emissions from the use of LPG and saving Juana money.  Juana said: “the change generated by this project has been valuable.  It has brought us the satisfaction of being able to change the way in which we work by transforming our business to be environmentally friendly and creating jobs for people in the community all the while using the new system that displaces 6,297 kgs of LPG a year and saves us $42,694 pesos per year (roughly US$2,215 per year).”

Following closure of the FIRCO project, Mexico’s government continued to promote the use of renewable energy and energy efficiency technologies through ongoing provision of matching grants under the “natural fibers” program within the Ministry of Agriculture. In the private sector, many former FIRCO project beneficiaries continue to invest in additional technologies using their own resources. Finally, the solar industry bolstered by the project continues to thrive.