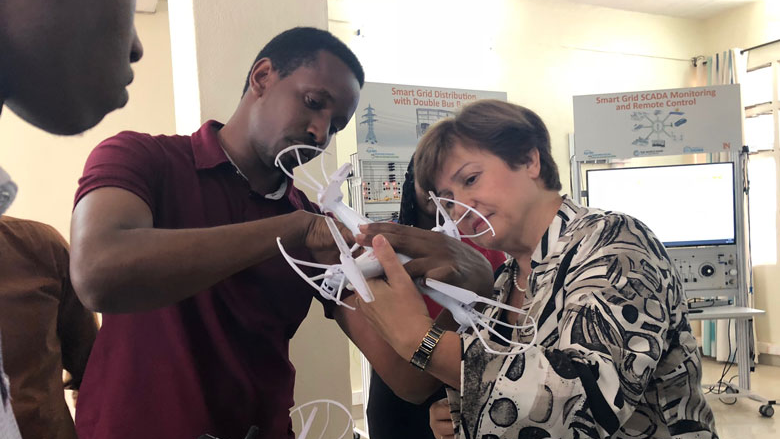 The Rwanda Drivers of Growth Study brought new ideas to fundamentally shift the mindset of the Rwandan Government toward long-term economic development and reform. The study has strong ownership in Rwanda and has informed Rwanda's Vision 2050 and the Government's 2018-2024 Seven-Year Plan.

Rwanda envisions becoming an upper middle-income country by 2035—and high-income by 2050. This is an ambitious target, requiring a bold reform agenda. The country is making progress: average income rose three- and-a half-fold since the devastation of the 1994 genocide and the preceding three decades of economic stagnation. The reform agenda for accelerating growth to even higher levels and sustaining it is complex and highly demanding. The country’s Vision 2050 provides a platform to review and update policy priorities to shape the country’s long-term vision. The Rwanda Drivers of Growth Study—a joint undertaking by experts from Rwanda and the World Bank—provides critical inputs for formulation of medium and long-term growth strategies underpinning Rwanda’s Vision 2050 and Economic Development and Poverty Reduction Strategy (EDPRS).

The World Bank Group worked in partnership with Rwandan experts and government agencies, including the Ministry of Finance, line ministries, the City of Kigali, and the Special Policy Unit at the Presidency, to produce this forward-looking study of how Rwanda can propel itself forward to achieve its Vision 2050. The report focuses on four drivers of growth—innovation, integration, agglomeration and competition—that the country will need to master in order to become a middle- or high-income country. The report emphasizes the need to invest in human capital and develop a workforce that will be ready for the jobs of the future.

The unique collaborative model behind the report drew on the World Bank's earlier experience with another joint study, Vietnam 2035. The team's experience in such complex studies proved instrumental in finalizing the report in a relatively tight time-frame. Drawing on the World Bank's successful experiences while finding new and innovative approaches for working across boundaries that better fit Rwanda's unique institutional setup was key in producing a collaborative and influential report.

Rwanda: Drivers of Growth was launched in Kigali on November 10, 2018 and has already proven transformational. It brought new ideas and fresh thinking to fundamentally shift the mindset toward long-term economic development and reform in Rwanda. The study has contributed to capacity building within the government for long-term strategy development and has informed the country’s Vision 2050 and 2018-2024 Seven-Year Plan. The study was used as an organizing framework for 2018 National Leadership retreat, a key political decision-making event. The study has provided a reference point for action on human capital, information communications technology (ICT), private sector development, regional integration and trade, infrastructure, agriculture and urbanization. For instance, its emphasis on human capital development found strong resonance among Rwanda's senior leadership and led to an additional $150 million support from the World Bank for human capital development.

The total cumulative cost of the project is $1.25 million of which $1.17 million is funded by the World Bank and the remainder ($80,000) funded by the Korea Global Facility on Growth for Development.

The report was jointly written by a core team of experts from Rwanda and the World Bank. By focusing on innovative and evidence-based work, and strong investment in building a relationship of trust with the Rwandan partners, the World Bank Group team was able to tackle (jointly with its Rwandan partners) some complex and challenging issues (such as the role of the state-owned and state-connected firms, effectiveness of industrial policy, and governance and institutions), that had previously proven difficult. The core team also included experts from the International Growth Center, while financial resources mobilized through the partnership with the Republic of Korea’s Global Facility for Growth and Development (GFGD) Initiative allowed to secure enough resources for deep-dive sector studies.

The study provided a renewed emphasis on human capital and private sector development in ways that had proven elusive before. The engagement through this process has opened new doors for the Bank's engagement with Rwanda. Case in point is the education sector - which has been placed firmly on the front burner in terms of the Bank's priorities in the country, deriving from the findings of the Study. Within the World Bank Group, the study is seen as a prototype for replication in select other countries where client commitment is visibly present. The study clearly formulated the need for prioritization of human capital which led to a proposal to increase fiscal resources for the education under 2019/20 budget.

Rwanda’s strategic national planning has benefited significantly from the study. The report not only provided analytical inputs and a framework for reform and investment prioritization, but it also contributed to capacity development for long-term national planning within the government. On Rwanda’s side, the study was led by the Chief Economist of the Government, which ensured strong synergies between the study and overall government decision-making. Relevant line ministers had their core technical staff contributing to the study as well, which helped to bring various sector planning processes together under a common agenda of maximizing Rwanda’s long-term growth potential.