Building and Sustaining Livelihood through Enterprise Development in Rural Afghanistan 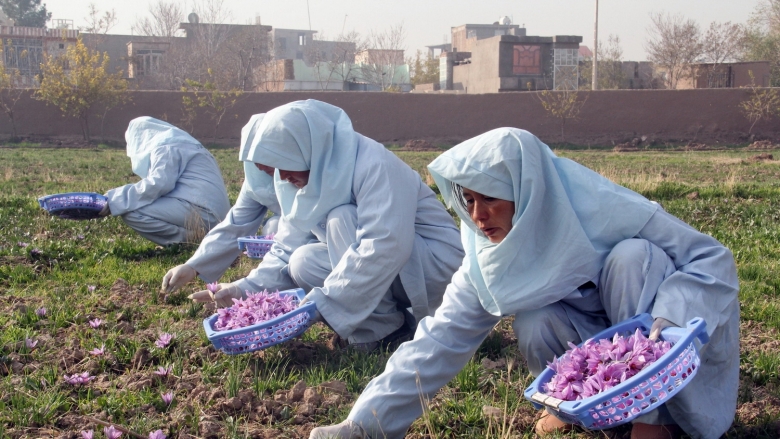 The Afghanistan Rural Enterprise Development Program (AREDP) has improved employment opportunities and income of target rural dwellers in Afghanistan. The program supports rural poor people by: enhancing their participation in economic activities, increasing their access to finance, and by supporting the establishment of enterprises and improving market linkages. In eight years, the enterprises (52% owned by women) increased their net revenues by 47% and employment by 30%. The project benefited 81,880 rural men and women.

More than 30 years of unending and unpredictable conflicts and violence resulted in unimaginable negative effects on human capital, infrastructure, economy, livelihoods and sectoral linkages. Lack of access to finance and business know-how, inadequate marketing, and poor post-harvest practices also constrained economic development and limited on-farm and non-farm employment opportunities, thus perpetuating poverty in rural areas where 75% of the population lived. Private sector was poorly developed given the prevailing approach to development assistance through pure grants and public provision and it was very difficult to link rural producers with market and build trust among value chain actors. Therefore, the rural landscape holds very few livelihood opportunities for men and women.

AREDP’s success is due to its innovative and risk-taking approach of overcoming challenges in fragile countries. Before the program, the approach for development assistance in Afghanistan was through grants and public provision in the agriculture sector. The project changed this approach by supporting self-help among rural women and men and by mobilizing savings to facilitate village-level access to credit and micro-enterprise development. AREDP’s solution to underdeveloped private sector was to support both producers and Small and Medium Enterprise (SMEs) to tap into urban growth centers by integrating the community-led and market-driven approaches. At the village level, the project supported producers to finance micro-enterprises. Simultaneously, the market-driven approach enabled direct support to SMEs in district or urban centers to develop their supply chains with these rural producers. AREDP also incentivized the system by introducing an innovative deliverable based payment to business development services which reduced cost of operation significantly.

At a total cost of US$45.23 million, AREDP developed micro-enterprises at village level and supported SMEs to create supply chains from 2010 to 2018 and achieved the following:

The Project was implemented by the Ministry of Rural Rehabilitation and Development (MRRD) in five provinces of Afghanistan (i.e., Balkh, Bamyan, Herat, Nangahar, and Parwan). At the village level, it partnered with middlemen and traders to support rural producers in sustainable supply chains. The project also links up with SMEs in growth centers to strengthen enterprise management, product quality, and value addition. AREDP federates mature Saving Groups (SGs) into Village Saving and Loan Associations (VSLAs) that are eventually linked to the Microfinance Institutions (MFIs) for credit support. The job trainings are carried out through collaboration with local and international NGOs, development partners and learning institutions in Afghanistan. Through exhibitions and trade fairs that are frequently promoted by the project, forward linkages with inclusion of contracts were also made between rural producers, urban sellers, distributors and governmental institutions.

The project provided for in-built mechanisms to ensure the sustainability of its community groups and its business continuity. It does this through its self-help based indigenous microfinance model with no matching grant, which has created a sense of ownership and developed confidence among beneficiaries. The hiring of SMEs as BDSPs, the linkage with government institutions and collaboration with service providers ensured uninterrupted self-propelled chain of business development. The project has now been transformed into a national project of USD$100 million that focuses on women enterprise. The new project called Women Economic Empowerment Rural Development Project (WEE-RDP) covers the whole 34 provinces and modeled after AREDP.

Mohammad Naim is a saffron farmer in Herat province. In 2013, Naim, with support from the Afghanistan Rural Enterprise Development Project (AREDP), established Taban Enterprise Group. He and the Group members participated in training, exposure visits, and agriculture fairs nationwide. The Group has since improved their saffron quality and expanded their operation to seasonally hire 120 women for harvesting and processing. “I was just a small-scale enterprise owner,” said Naim, “but after AREDP supported me, I have become a nation-wide entrepreneur. From not being able to cover my own family expenses to an annual income of Afs 400,000 (about US$6,000) is a dream come true, and I have AREDP to thank for making this happen.”