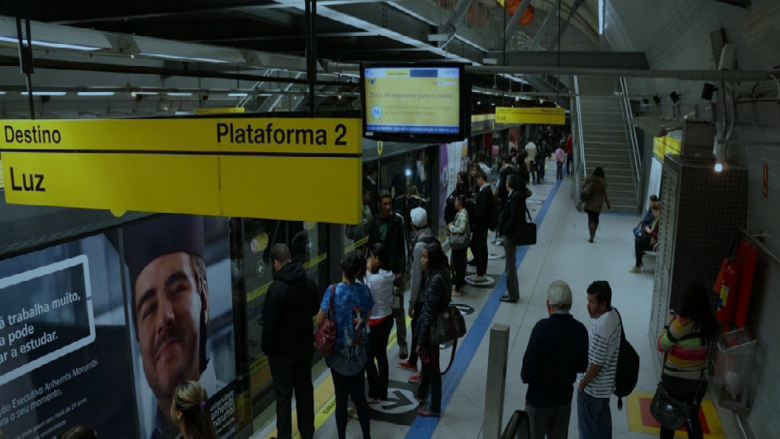 In 2002, São Paulo embarked on one of its most innovative and successful transport projects of the decade: the construction of Metro Line 4, instituting a modern, safe, and accessible metro line that improves urban mobility along a corridor transporting 750,000 people per day. Today, as the project’s Phase 2 reaches an end, crossing the city from Vila Sônia on the western side to Luz station on other requires only 32 minutes, compared to more than 60 minutes in 2002.

In the late 1990s, the São Paulo Metropolitan Region (SPMR) faced severe challenges related to uncontrolled urban sprawl, the associated traffic congestion, and increased travel times and distances. Increased motorization had resulted in negative externalities including pollution, accidents, and long commuting times; the public transport sector’s lack of integration was a primary constraint, especially for poor residents at the peripheries of the metropolitan area, for whom the average daily commuting time was 2.5 hours. About 37 percent of daily commuting trips were by car, with only 30.8 percent by public transport. Buses were the main public transport mode used: They accounted for 75 percent of all public transport trips. Vehicles contributed to 31 percent of particulate matter emissions. In 2006, about 150,000 road accidents occurred in the SPMR, with costs conservatively estimated at US$1.5 million per day.

São Paulo Metro Line 4 was designed to carry one million passengers per day. It was Brazil’s first passenger transport public-private partnership (PPP), with operation and maintenance under a 30-year private company concession. The PPP was designed with an innovative risk demand sharing structure. The private sector bears all risks when ridership remains within a target range. Below the lower limit, a public payment obligation is generated; above the higher limit, public and private partners share the gains. Another innovation was to segment construction into two phases, both supported by the World Bank. The first phase included stations with large ridership; the five remaining stations, plus a four-kilometer extension, were left for the second phase. Phased construction required an innovative implementation strategy to deal with construction on the already fully operating system. Project continuity was reinforced by a project management oversight consultant that remained throughout the project.

Line 4 has substantially improved the quality of service provided to urban transport users in the area of influence served by the project’s Phase 2.

External financing for the public civil works of the São Paulo Metro Line 4 (Phase 2) was co-financed by the Japan Bank for International Cooperation (JBIC) and the Bank. Each financed close to 22 percent of the initial total costs (US$130 million), while counterpart funding was expected to be 57 percent. The Bank provided implementation support on behalf of JBIC. In December 2015, the borrower requested use of US$210 million in savings obtained under the São Paulo Metro Line 5 Project to address the financing needs of Line 4, thus reducing direct counterpart funding in a tight fiscal situation for the State of São Paulo.

Similar to Phase 1, Phase 2 relied on the private concessionaire ViaQuatro for the acquisition of new trains and the operation and maintenance (O&M) of the newly constructed stations. The 30-year concession contract includes operation of the Metro Line 4 as well as investment and installation of rolling stock, signs, track connections, and data transmission in the train networks. This PPP agreement was signed during Phase 1 (2006) and continued to work successfully during Phase 2, providing a great example of the benefits of using the Maximizing Finance for Development framework in the context of large transport infrastructure investments. ViaQuatro supplied 14 trains in Phase 1 and 15 additional trains during Phase 2. Concessionaire ViaQuatro used an estimated US$450 million of private financing for O&M on Line 4 between 2010 and 2018.

Passenger Andressa Gomes Santos lives in Paraisópolis, in São Paulo’s south zone. She commutes using Line 4. “The headway between trains is very short, and I save 60 minutes in my daily commute, besides the $2 dollars a day given that I don’t need to get the bus to reach the Metro.”

Giane Maria Freitas da Silva lives in Cotia, a western area of São Paulo and uses Line 4 both for commuting and over the weekends for leisure traveling, integrating with Line 2. “I am saving between 20 and 30 minutes every day, and I am very pleased with the comfort it provides.”

Wanderson Adelino Dias Fernandes lives in the Paraisópolis, in the south zone of São Paulo, and commutes to work using Line 4. “I am surprised with so much technology like the  platform doors to increase safety for the users. The trains are so  much faster than the buses, and I save between 40 to 60 minutes in my daily commute.”

Although significant gains in rider benefits have already been achieved, Line 4 is not yet complete. One station and its access tunnel are still under construction and, with financing under a Bank loan, are due to be completed by 2020. Travel time gains between Vila Sônia and Luz are then expected to be even greater: The two ends of the line will be reachable within 20 minutes. The Bank’s continued support ensures the financial and technical sustainability of the project, as does the commitment of the State of São Paulo to improving the quality of urban mobility for its residents. Promoting urban sustainable mobility has been one of the main pillars of the SPMR’s 16-year Strategic Master Plan, developed in 2014, which included ambitious actions such as the introduction of parking minimums, promotion of a biking culture, and strong investments in mass transit.