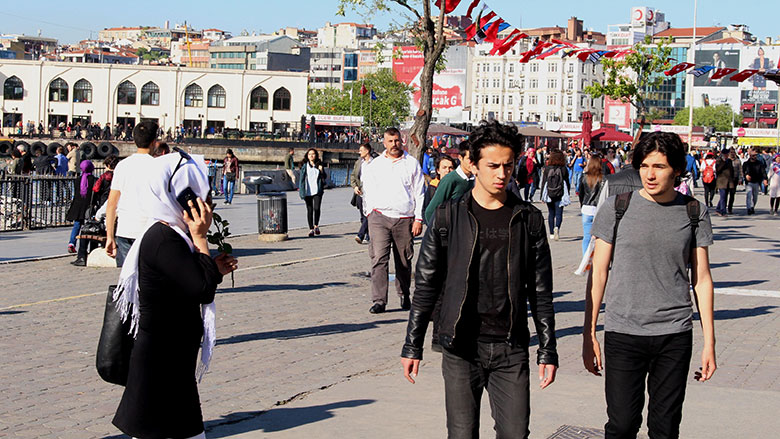 Over 2 million people in cities across Turkey have benefitted from access to improved services, such as water supply, sewerage, and solid waste management.

Turkey has achieved impressive economic and social progress since 2000. Poverty has more than halved and extreme poverty has fallen further. Macroeconomic and fiscal stability were most critical to increasing employment and incomes. Turkey has urbanized dramatically, opened to foreign trade and finance, harmonized many laws and regulations with European Union (EU) standards, and greatly expanded access to public services.

Despite remarkable achievements that enabled Turkey to become the 18th-largest global economy, enjoy a per capita income of US$10,597 in 2017, and gain membership in the Organisation for Economic Co-operation and Development and G20, the country still faces development challenges. Educational quality, competitiveness, and productivity are stagnant, and inequality is on the rise.

Female labor force participation rates are below expectations, and the influx of 3.6 million Syrian refugees is putting a strain on public services. In addition, recent economic turbulence has weakened the foundations for growth and highlighted the need for Turkey to bring about a new era of reform and strengthen its institutions.

The partnership between Turkey and the World Bank Group (WBG), that was laid out in the Country Partnership Strategy of 2012-2016, aimed to achieve (i) enhanced competitiveness and employment, (ii) improved equity and social services, and (iii) deepened sustainable development. The WBG program in Turkey has an embedded flexibility that allows the program to adapt and respond to evolving country circumstances and development priorities.

In 2016, the most recent countrywide evaluation of the Bank’s partnership with Turkey, the Completion Report of the Country Partnership Strategy (CPS) for 2012–16, revealed that the partnership had overall been satisfactory, with most targets achieved. Some of those achievements include:

Since Turkey became a member of the WBG, the International Bank for Reconstruction and Development (IBRD) has been supporting its development goals as a key international partner. Since 2007, IBRD’s lending to Turkey has reached US$15.7 billion, in line with programs outlined in the various CPS and in support of development programs in the energy, urban development, financial markets, agriculture, and water sectors in the form of Investment Project Financing and Development Policy Operations (DPOs).

One important area in recent years has been support for the Government’s response to the 3.6 million Syrian refugees in Turkey. The WBG is partnering with the EU Funded Facility for Refugees in Turkey (FRiT) and helping with social support and adaptation, labor markets and the economy, and education, as well as with data collection, measurement, and monitoring.

The Bank is a key partner for the Government, providing financing for and advice on Turkey’s complex infrastructure and services improvement projects, as well as its broad socioeconomic reform program. The Bank is also playing a key role in maximizing finance for development by leveraging partnerships with other international financial institutions and catalyzing private sector commercial financing.

A recent example of success in mobilizing financing is the Trans-Anatolian Gas Pipeline Project (TANAP), where the Bank’s funding of US$800 million (to Turkey and Azerbaijan) and due diligence on the project helped leverage US$1.2 billion from the Multilateral Investment Guarantee Agency to support guarantees for commercial borrowing and attract co-financing of over US$1 billion from the Asian Infrastructure and Investment Bank (AIIB) and the European Bank for Reconstruction and Development (EBRD).

Continued effective coordination with the EU (through the IPA instrument and the FRiT) has become an important cornerstone of the program. Furthermore, cooperation with EBRD on technical assistance in the energy sector, Agence Française de Développement in the municipal sector, the European Investment Bank and AIIB on the TANAP operation, the German Corporation for International Cooperation (GIZ) on the Partnership for Market Readiness Project, and SIDA on the gender agenda represent the new frontiers of WBG donor coordination in Turkey.

The WBG is committed to continuing to work with Turkey’s Government, private sector enterprises, and public and private institutions, as well as a range of development partners, to bring about accelerated progress on the country’s development goals. Going forward, the main focus will be on furthering the socioeconomic reform agenda and improving trust in its institutions.

IBRD financing for FY18–21 is estimated at US$5–$7.5 billion, while IFC’s own-account investment program is expected to be US$600–$800 million per year. Turkey actively utilizes the WBG’s analytical and technical knowledge work. An extensive range of knowledge products aim to inform policy discussions in such areas as education, labor, finance, competitiveness, transport, forestry, land, and energy and are the Bank’s primary instruments for broadening engagement with all stakeholders in Turkey.

The recent increase in the Trust Fund portfolio enabled the WBG’s partnership to expand to refugee response, education, labor market development, energy, disaster risk management, and urban development.  In FY18, Turkey signed a Reimbursable Advisory Services agreement with the Bank that will provide support to improving the business environment. The WBG’s long-term focus will continue to maximize opportunities to support Turkey’s progression to higher-income status.

Women choose to start cooperatives in Turkey to provide jobs, be empowered socially, and find common solutions to everyday challenges. Preschool education tops the list of dozens of women’s cooperatives in Turkey. A lack of affordable child care services and business mentorship opportunities are two important factors influencing the low rate of job participation among women.

According to Elif Belge, “I am a primary school graduate. I have never worked before. I came to this cooperative first to learn a profession. I now am producing soap. Thanks to the cooperative’s network, I am also selling the soap I produce. I am earning a living. I am so proud of myself.”

As Nuray Kole says, “This place used to be very stinky. We were not able to go out, especially in the evenings, it was a very bad smell. After the project, the environment changed completely. We can go out to the parks, even our sea water is cleaner now. Oh what a change!”

Ministry of Treasury and Finance

Ministry of Environment and Urbanization

Delegation of the EU to Turkey