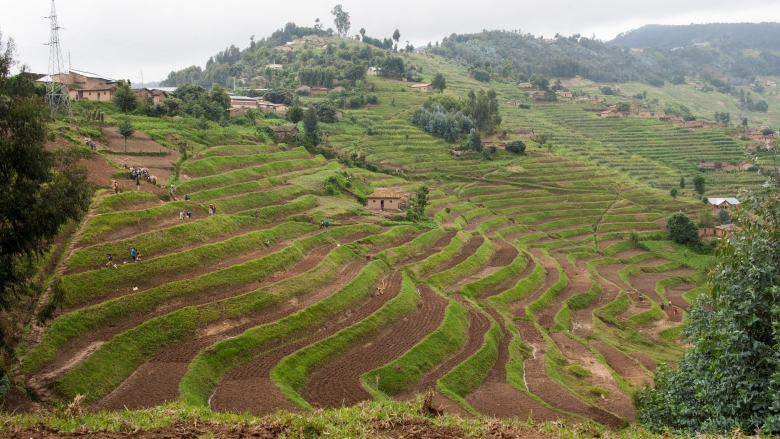 Drawing upon IDA and Donor funding and expertise in climate-smart agriculture since 2010, Rwanda has increased the productivity of hillside agriculture tenfold for target irrigated areas, fivefold for targeted non-irrigated areas, doubled the share of commercialized products, reaching over 292,000 beneficiaries (over 142,000 women), and minimizing erosion and sediment load by 76%.

The Land Husbandry, Water Harvesting and Hillside Irrigation (LWH) project has been designed to support the Rwandan government (GoR)  to address the critical agenda of hillside intensification through improved land-husbandry and increased productivity in 101 pilot watersheds covering 30,250 ha of land. The LWH project funded several LWH sites in support of the GoR program and has been additionally supporting the formulation of a Common Framework of Engagement (CFE) for investments. Following the integrative approach distinguishing climate-smart agriculture, the LWH project combines participatory land-use processes and a modified watershed approach to promote high stakeholder involvement and buy-in. This allowed to build the necessary capacity and infrastructure at an institutional and community level to introduce sustainable land husbandry measures for hillside agriculture, as well as to develop hillside irrigation, ultimately increasing productivity and livelihoods and reducing climate vulnerability.

The LWH project has improved the productivity and commercialization of hillside agriculture, strengthened value chains for agricultural products and expanded access to rural finance, while improving hillside land husbandry technologies, techniques, and infrastructure between 2009 and 2017:

As such, the LHW project substantially increased food security and the climate resilience of the target populations.

Partnership arrangements for the LWH project came in the form of: (i) programmatic partnership through the LWH CFE; (ii) co-financing for the IDA-financed project with CIDA, USAID and GAFSP (see above); (c) technical partnership with the IFC on leasing; and (d) linkages with rural infrastructure and finance operations outside the project. With its environmental and social safeguards management framework, the World Bank Group has a strong stewardship and catalyst role for parallel and co-financiers that could not be met through other sources of funding.

The lessons learned from the LHW project will transpire into and scale up the Government of Rwanda’s LHW program, particularly through strengthening of institutional capacities and sector wide approaches. Agricultural productivity and commercialization in difficult topographies will remain a challenge both in Rwanda, the Africa region and beyond, especially in the face of increased climate variability. The LHW project is another proof-of-concept of climate smart agriculture to achieve significant results even in the most challenging environments. The LHW project will inform new projects of the WBG and its development partners will address those challenges in the context of future IDA-financed agriculture projects.

Nayirabarinze in Rwamagana District had his life significantly improved by the LWH project. “I used to harvest about 200 kg of maize on one hectare of land.” After implementing land husbandry technologies, his production soared. “In 2014 I harvested 11 tons of maize from two hectares.” By selling his excess produce,  Nayirabarinze ventured into poultry farming and now owns 2,800 chicken layers, supplying about 1,000 eggs to markets in Kigali daily. “I earn Rwf70,000 daily from egg sales and this enables me to expand my business. I am planning to have a savings account for my children so that they can live a better life in future.” 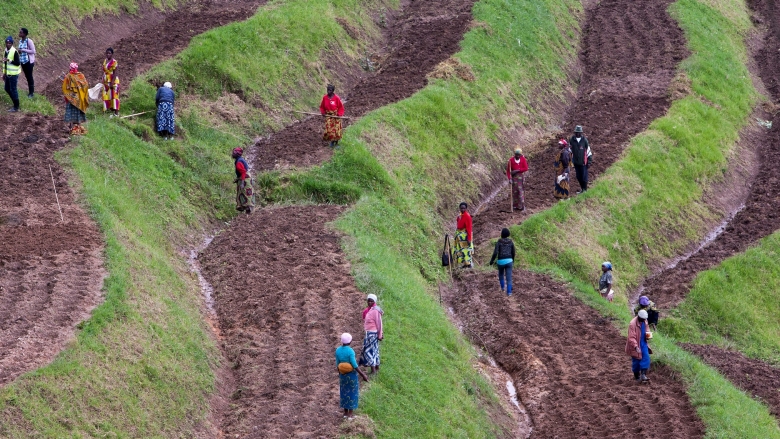