A Second Chance at Education in Timor-Leste

In 2002, having regained independence, Timor-Leste had to rebuild almost all its institutions from the ground up. After decades of struggle, many Timorese lacked a basic education and more than a third of all adults were illiterate. By 2010, considerable progress toward meeting development goals had been made, however human development outcomes for Timorese—especially in health and education—remained among the weakest in the East Asia and Pacific region.

Enrolment in primary education had increased from 68 percent in 2005 to 85 percent in 2008. However, many young and adult Timorese still lacked the adequate basic education to fully participate in the economy and society. In 2009, only 33 percent of Grade 1 students continued to Grade 6, and in 2010, 25 percent of children aged 6 to 14 years were not in school.

This resulted in approximately 36 percent of the population over 15 years of age being functionally literate, 27 percent semi-literate, and a full 37 percent of the adult population was totally illiterate. It is estimated that there were over 8400 children who had never had access to, or who could not complete, primary education.

The World Bank-funded Second Chance Education Project (US$4.5 million) was approved in 2010,  to support the Ministry of Education in the establishment of a sustainable national equivalency program, which could increase the number of out-of-school youth and adults who completed a recognized equivalency program. The project also aimed to increase community participation in education, improve adult literacy programs, and help train staff and develop school curriculum.

The project set up nine community learning centers and prepared a curriculum, learning materials, and a teacher training process appropriate for mature students. Recognizing the special needs of mature students, the program offered a flexible delivery method, with a combination of face-to-face learning and distance learning. This enabled youth and adults to continue learning while attending to work, family, or other responsibilities.

Through the program, youth and young adults are given the opportunity to complete their primary education and junior secondary education.  Though the program is designed for adult learners, they could also gain essential skills in Linguistics (Tetum literacy, Portuguese literacy) Science (Mathematics, Natural Science, Social Science) and Personal Development (Arts & Culture, Health, Physical Education, Religion). They also benefit from some vocational skills organized by the Community Learning Centers.

Successful graduates from the program are awarded a certificate which is equivalent to—and has the same legal status as—a standard junior secondary education certificate, allowing them to pursue further education or employment.

"I heard about the Second Chance Education Program and I decided to go back to school. I feel so happy when I'm sitting in the class with my classmates because this is a good opportunity for me. I also hope that my participation will inspire other women to go back to school and for my children to do better in school" 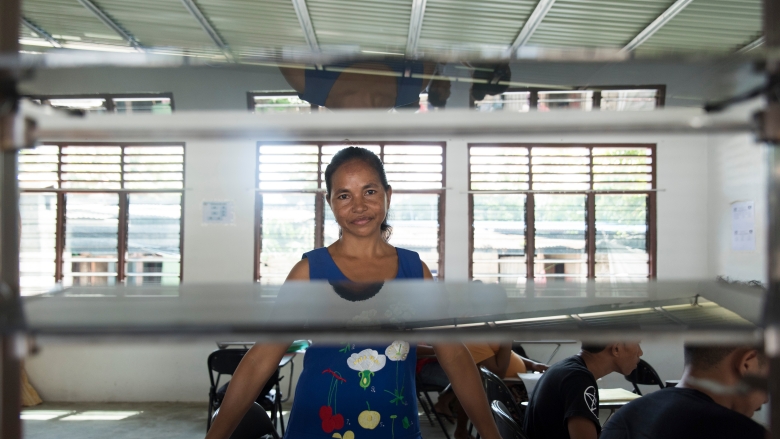 IDA is the part of the World Bank that helps the world’s poorest countries. IDA is one of the largest sources of assistance for the world’s 75 poorest countries and lends money on concessional terms. This means that IDA credits have a very low or zero interest charge and repayments are stretched over 25 to 40 years, including a 5- to 10-year grace period.

The Second Chance Education Project is expected to be crucial for the accumulation of human capital and for building the institutions and social capital needed for long-term economic development and poverty reduction.

While the initial World Bank-supported project has completed, the Government of Timor-Leste continues to fund and support the program to address the backlog of adults without formal school qualifications.

The Ministry of Education has developed a plan to allocate funding for supporting the establishment of 11 new community learning centers over 2018.