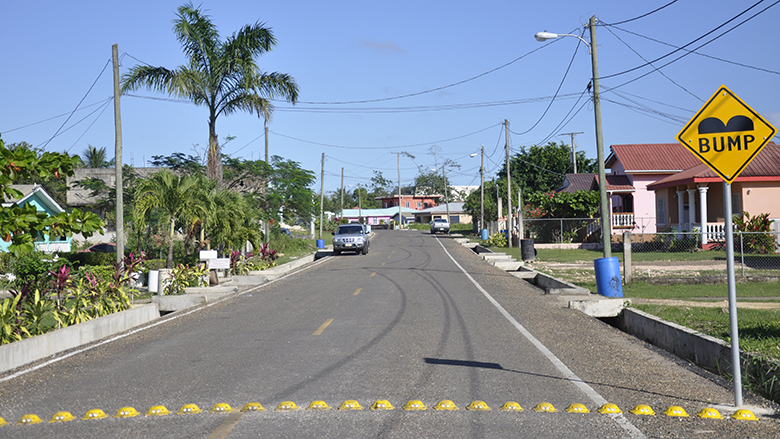 Despite its small engagement, the World Bank has supported efforts to strengthen Belize’s vulnerability to climate shocks and to strengthen public infrastructure. Through the Municipal Development Project, the Bank has helped develop new infrastructure that has increased access to roads, improved road signage, and reduced traffic congestion. A total of 157,233 beneficiaries, of which 35,280 are women, gained access to improved basic municipal infrastructure.

Belize is a small, upper-middle-income country with a population of 359,000 and a unique natural resource endowment, including the largest barrier reef in the Americas. The country’s global comparative advantage derives principally from the natural resource base (which supports tourism and agriculture) and from its geographic proximity to major markets, such as the USA. Nonetheless, economic growth rates have barely kept up with population growth since the mid-1990s, and poverty rates (estimated to be above 40 percent) are much higher than in neighboring countries. Belize’s principal development challenges are rooted in its high vulnerability to external shocks, including unfavorable terms of trade developments, natural hazards, and the impacts of global climate change. Concurrently, the government’s ability to address and mitigate these challenges has been constrained by high debt levels and severely limited fiscal space.

There was very limited engagement between the Bank and Belize for most of the 2000s. The FY2012-15 Belize Country Partnership Strategy (CPS), together with the 2-year Interim Strategy Note (ISN) that preceded it, was an important step toward closer cooperation after a long hiatus.  The Bank-supported program under the FY2010-11 ISN was small, including a single loan for a Municipal Development Project – MDP (US$15 million) that marked the Bank’s reengagement in the country. The subsequent FY12-15 CPS concentrated on one central theme -- support for the Government’s efforts to adopt a sustainable natural resource-based economic model while enhancing the country’s resilience to climate change and natural hazards. To this end, improving municipal infrastructure and management was a high priority for the Government, so the Bank mobilized a team of experts in urban development, economic growth and disaster risk management to support the Government. Bank support on the resilience agenda was further strengthened with the Bank-financed Climate Resilience Infrastructure Project (CRIP). The Bank also provided non-lending technical assistance in areas linked to environmental sustainability and natural resource-based livelihoods, which contributed to building the analytical basis for grant funded projects, including the Management and Protection of Key Biodiversity Areas Project, and the Marine Conservation and Climate Adaptation Project.

of roads were rehabilitated versus a target of 4 km

Bank financing for lending and analytical and advisory services supported the following results from 2010 to 2017:

From fiscal year 2011 to 2017, the Bank’s portfolio in Belize (consisting of operations financed by the Bank, through the International Bank for Reconstruction and Development (IBRD), and grants from Bank-administered trust funds) more than tripled, with the approval of the Climate Resilient Infrastructure Project (IBRD, US$30 million), the Marine Conservation and Climate Adaptation Project (Adaptation Fund, US$5.53 million), the Management of Key Biodiversity Areas (KBA) Project (GEF, US$6.09 million) and the Energy Resilience and Climate Adaptation Project (GEF, US$8 million). As of April 30, 2018, the Bank’s lending and trust fund portfolio in Belize consists of these four active projects, totaling US$49.62 million in lending commitments, and reflecting investments in various sectors including roads, energy, natural resources and environment.

The Ministry of Economic Development is the Bank’s main counterpart and serves as the coordinator for Bank engagement in the country. Under the overall support from the Ministry of Economic Development, the World Bank will continue to coordinate with and engage other partners in government for the implementation of the portfolio. Also, the Bank has coordinated with the Inter-American Development Bank in the area of road infrastructure given the complementarity of support being provided by the two institutions in Belize. In 2016, the World Bank and the Inter-American Development Bank jointly supported capacity building and training for the Ministry of Works in Road Asset Management.

The Country Partnership Framework (CPF) for Belize covers the period from July 1, 2017 to June 30, 2022 (FY18-22). The Framework builds on the results and lessons of Belize’s first Country Partnership Strategy that covered the period FY12-15. The CPF is well aligned with the Government’s long-term development vision, Horizon 2030: National Development Framework 2010-2030, and the thematic priorities emerging from the 2016 Belize Systematic Country Diagnostic. The overarching goal of the proposed CPF is to support Belize in strengthening its economic resilience with particular focus on: (a) Fostering Climate Resilience and Environmental Sustainability; and (b) Promoting Financial Inclusion and Social Resilience.

In August 2017, Hurricane Matthew hit Belize. Anecdotal information indicated that little or no flooding resulted from the heavy rains in areas where road infrastructure works and rehabilitation had been implemented under the MDP. This showcased the increased resilience to adverse climatic events.

Additional benefits of the improved infrastructure include: