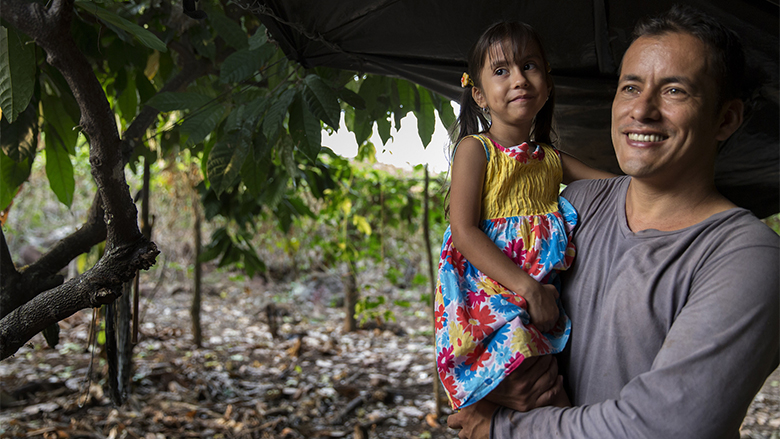 Sustainable, inclusive and equitable territorial development is a top priority for Colombia and an area in which World Bank (WB) support has been focused. Amongst other things, the Bank has helped Colombia to reduce vulnerability to disaster risks in key urban areas and contributed to the integration of smallholder farmers into modern value chains. Sustained support for the country’s structural economic and fiscal reform efforts have contributed to improved fiscal performance and economic management. Support for the construction and consolidation of peace in Colombia cuts across all areas of World Bank Group (WBG) engagement, and is having demonstrable impacts on those affected and displaced by conflict.

Over the last decade, Colombia consolidated its position among the top economic performers in Latin America. The country’s sound macroeconomic management helped sustain relatively high growth rates with average annual growth of close to 5 percent between 2006-2015. Despite a significant terms of trade shock between 2014 and 2016, estimated at nearly 4 percent of GDP, the Colombian economy proved resilient, bolstered by macroeconomic and structural reforms undertaken in recent years. This economic growth and resulting job creation has been the main driver for Colombia’s impressive strides in poverty reduction. Between 2002 and 2016, extreme poverty almost halved from 17.7 percent to 8.5 percent, while moderate poverty fell from 49.7 percent to 28.0 percent.  The number of poor people in Colombia declined from about 20 million to approximately 13.3 million over this period.

Despite the rapid reduction in poverty, Colombia’s poverty rate is still higher than the Latin American average. It remains one of the most unequal countries in the region which itself is one of the most unequal regions in the world. Large historical disparities persist between urban and rural areas. Colombia needs to broaden its sources of economic growth, and to do so in an inclusive and socially, fiscally, and environmentally sustainable manner. Boosting productivity and competitiveness in non-extractive sectors are critical to diversifying the economy and reducing its vulnerability to external shocks.

The WBG provides integrated packages of financial, knowledge and convening services from the WB, International Finance Corporation (IFC) and Multilateral Insurance Guarantee Agency (MIGA) to address Colombia’s ambitious development agenda. Among the array of instruments, programmatic Development Policy Financing (DPF) has offered timely support for the Government’s well-defined structural reform agenda, supporting such critical reform areas as growth and economic management, sustainable cities, environment and climate change and territorial development. A strong program of advisory services and analytics is central to the WBG’s engagement in Colombia and includes programmatic knowledge services, South-South knowledge exchanges and advisory services provided on a reimbursable basis. Complementing financial services with a range of targeted advisory products to accompany implementation has proven successful. In some areas, the Bank engages purely through knowledge services while the country obtains financing elsewhere. The WBG maintains a flexible approach to its engagement, allowing it to respond to emerging client demand and priorities. This has been particularly important in the context of a fluid global economic environment and an evolving post-conflict development agenda.

Colombia is IBRD’s 7th largest borrower per outstanding debt as of July 2017. The active portfolio is composed of 10 IBRD and 2 Global Environment Facility (GEF) projects totaling $2.8 billion in net commitments. Development Policy Financing operations are a feature of the lending portfolio, supporting sustainable development and sustained growth, territorial development, as well as fiscal and growth productivity. Investment Project Financing is providing support in such areas as water and sanitation, transport and education. Colombia also has a considerable Trust Fund portfolio representing a variety of sectors including biodiversity conservation in the Amazon, cattle ranching and supporting collective reparation to victims of armed conflict. A Multi-Donor Trust Fund launched in 2014 is supporting peace and post-conflict initiatives in the country. The WBG also has a sizeable portfolio of advisory services and analytics in Colombia, which includes a range of activities from multi-year programmatic engagements to just-in-time analysis to South-South knowledge exchanges.

The WBG’s partnership framework with Colombia builds on its convening power and joint work with other development partners. Both the Inter-American Development Bank (IDB) and Corporación Andina de Fomento (the Development Bank of Latin America) are partners with whom the WBG has ongoing inter-disciplinary activities, ranging from the “4G” infrastructure program, to mass transit systems in Bogota to operations under the Government’s Plan Pazcifico. Traditionally, the IDB and the WBG have complemented each other very well in their respective engagements and maintain a close dialogue. The Bank also maintains an active role in the Grupo de Cooperantes that coordinates the work of the bilateral and multilateral donor community. Two areas where the donor community is particularly active are the post-conflict and the climate/environment agendas. Within these two themes, the Bank takes the lead on several initiatives in coordination with interested bilaterals and multilaterals, including the UN.

In line with the current Country Partnership Framework (CPF) which continues through FY21, the WBG expects to maintain a flexible engagement and to continue providing integrated packages of financial, knowledge and convening services from the WB, IFC and MIGA to address Colombia’s ambitious development agenda. Informed by a Systematic Country Diagnostic as well as consultations with stakeholders and Government, the CPF sets out three priority areas for engagement: (i) fostering balanced territorial development; (ii) enhancing social inclusion and mobility through improved service delivery; and (iii) supporting fiscal sustainability and productivity. Support for the peace building process cuts across all areas of WBG engagement, from land property rights in rural areas, for instance, to improving justice service delivery and access to justice.

Nydya García is a member of one of the 1,067 households living in Bogotá’s Nueva Esperanza neighborhood that were resettled to safer locations with secure housing tenure under the World Bank’s Disaster Vulnerability Reduction Project.

Speaking of her experience in Nueva Esperanza, Ms. García noted: “When I moved here, there was no electricity, no water, and little by little the area began to be populated. As more houses were built here the land began to become unstable. Every day we had more landslides. Water used to come through my house, through the bedroom, when it rained as if it were a drainage pipe.  Sometimes, when it rained heavily, we would feel scared because we knew that it could cause our house to fall down anytime. Once when we were sleeping and it was raining heavily, the land from the house behind fell on top of us and the planks of our house nearly collapsed under that weight.

I have prospered more since I left the neighborhood. I have been more enthusiastic about my work in order to progress financially, to have a better life.  I am very happy to have been relocated. Absolutely.”