Skip to Main Navigation
This page in:_
Results Briefs July 11, 2018 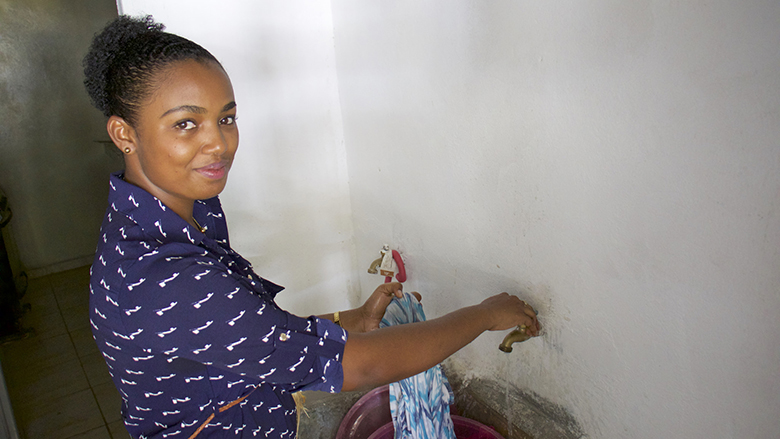 Yimitzia , beneficiary of the project.

Panama improved the quality of water service for 80,382 beneficiaries in Colón and provided the National Water and Sewer Agency with a replicable model, using performance-based contracts, for effectively piloting and implementing new methods of doing business.

At the time of project design, Panama’s National Water and Sewer Agency (Instituto de Acueductos y Alcantarillados Nacionales, IDAAN) faced serious capacity issues. IDAAN had not raised tariffs since 1982 (representing a 50 percent decline in the tariff’s real value), and by 2008 IDAAN’s operational deficit had reached US$34 million. Rather than focusing on improving the efficiency and quality of service across urban areas, IDAAN had largely concentrated its efforts on maintaining the status quo and responding to emergencies. IDAAN faced particular challenges ensuring service quality in low-income neighborhoods. In Colón, approximately 30 percent of the city’s 165,000 residents lacked access to reliable water service. Only 38 percent of Colón’s neighborhoods reported 18 to 24 hours of service per day (far below the national average of 70 percent). The Colón Business Unit was one of IDAAN’s worst-performing units. Tariff collection rates totaled only about 40 percent of billing, and nonrevenue water was estimated at 54 percent.

The Panama Metro Water and Sanitation Improvement Project took shape in response to IDAAN’s capacity issues and the significant operational challenges in Colón. The World Bank Team suggested utilizing a performance-based contract (PBC) for the construction, rehabilitation, and repair work required to improve both the commercial and the operational efficiency of the Colón Business Unit and the continuity of water service in Colón. Because IDAAN lacked experience with PBCs, the Bank Team, with the support of a US$70,000 Public-Private Infrastructure Advisory Facility Grant (TF011135), convened international experts to support the design and implementation of the contract and facilitated a knowledge exchange event with Honduras’s National Water and Sanitation Services Utility. The PBC transferred virtually full responsibility to the contractor for results on three key indicators. Fixed payments covered 70 percent of the contract value, with the remaining 30 percent going toward variable payments based on the contractor’s progress toward achieving key performance indicator targets. An international engineering supervision firm was hired to monitor PBC implementation and to independently verify achievement of the three key indicators by the contractor.

The project resulted in increased continuity in the water supply, from 13 percent in 2014 to 71 percent at the project close in June 2017.

In addition to these achievements, the project provided IDAAN with a functional model, replicable in its other business units, of a contract capable of effectively addressing system inefficiencies.

The World Bank, through the International Bank for Reconstruction and Development, provided a loan in the amount of US$24.5 million toward the total project cost of US$29.9 million. The project also received US$5.4 million in counterpart financing.

Prior to the project, many Colón residents relied for water on tanker trucks and rainwater collection. Project beneficiaries gained access to continuous sources of potable water in their homes, resulting in tremendous improvements in their quality of life. Thus far, more than 150,000 individuals have benefited from the project, and 75 percent of Colón’s population now has water access 24 hours a day.

Colón resident Maria Martinez now has a water meter installed. She lives in the Valle Verde neighborhood and had gone without access to clean water for the past 20 years. “Before this project, we had no water at all. We used to stand in lines of more than 20 people just to get two or three buckets of water. Those were hard times. For me, water is like gold. Without water, it was almost impossible to live.”

“It’s much better than it used to be,” says Bertha de Vitola, a resident in Colón’s Davis neighborhood. “We now have the collection facilities in a central location that provides easy access to all the communities. Now all we have to do is make sure we pay our bill on time. We now have water access 24 hours a day, and good water pressure, too.”

Although IDAAN officials recognize the success of the PBC model, no concrete plans are in place to follow up on Colón’s performance-based contract. The risk is high that Colón’s results will not be sustained: The Colón Business Unit is highly dependent on IDAAN’s central offices, and it has limited resources with which to maintain its service quality gains. A follow-up project, Metro Agua II, had been expected to secure long-term sustainability of the results, but the proposed US$281 million project did not move forward.