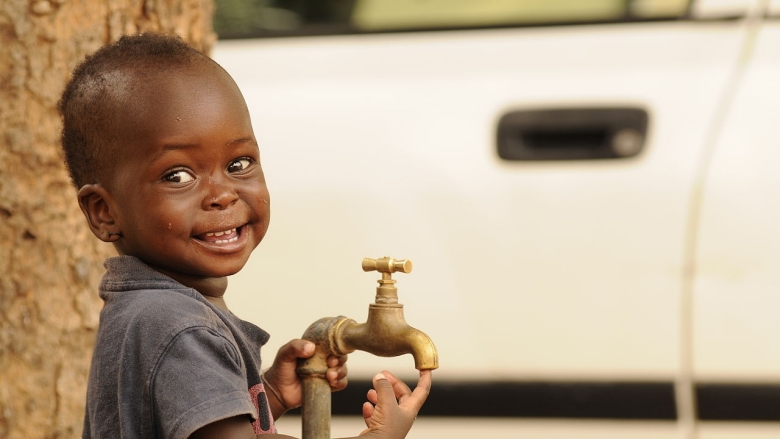 The Water and Sanitation Millennium Project (Programme d’Eau Potable et d’Assainissement du Millénaire, PEPAM) in Senegal facilitated access to services through programs for improving and expanding water production and distribution systems. From the project start in 2010 to the project closure in 2015, 206,000 people in urban areas and 172,000 people in rural areas were provided with access to improved water sources. Access to improved sanitation facilities also increased to serve 264,000 people.

Senegal, located on Africa’s West Coast, hosts one of the most developed water supply and sanitation (WSS) sectors in sub-Saharan Africa (SSA). However, at the time of the project preparation, the country still faced important challenges, including unequal access to potable water and sanitation services in urban and rural areas. There were particular concerns related to the coverage of sanitation facilities and services in rural areas.

The inequalities outlined above impact the poorest users in terms of quality and cost of services. In addition, the supply modes (private connections vs. standpipes or piped water vs. wells) show significant variations throughout the country.

Broadly, constraints on physical water supplies and increasing demands from multiple users placed additional stresses on WSS systems in Senegal. Furthermore, the country faced budget constraints that made it even more difficult to finance investments in the WSS sector sustainably.

Senegal needed to improve the financial viability of the WSS sector, in addition to improving the sustainability, reliability, and efficiency of water service delivery.

With an eye towards reaching the water and sanitation Millennium Development Goals (MDGs), the project was designed to boost water supply and sanitation services in rural and urban areas in Senegal. The Water and Sanitation Millennium Program (PEPAM) served as an instrument through which the Government of Senegal (GoS) aimed to enhance the provision, reliability, and security of the WSS sector. Overall, the PEPAM strategy marked a profound shift in project planning methods, organization, and management of WSS services in the country.

Institutional strengthening and capacity building also comprised a significant part of the project. The project brought together implementation agencies to facilitate access to services, support the rural water subsector reform, and strengthen capacities to deliver and manage (WSS) services. Importantly, the project set out to facilitate the transfer of maintenance to private operators and included the rehabilitation of boreholes, water storage facilities, and pumping equipment.

The project (2010-2015) consolidated the achievements of urban water reform, supported reform of the rural water subsector, and strengthened capacities to deliver and manage water and sanitation services. A total of 654,520 people directly benefitted from the project interventions, particularly through improved access to WSS services. The following results were observed during the life of the project:

The project was financed by the World Bank through an International Development Agency (IDA) Grant. A total of US$51.64 million was disbursed to the government of Senegal for the Water and Sanitation Millennium Project. The credit included a US$5 million contribution under the Crisis Response Window (CRW). The World Bank has long been a partner to the WSS sector in Senegal, and has supported the preparation and implementation of the PEPAM (which aims at guaranteeing access of the poor to basic social services) since 2005.

A number of project partners demonstrated a firm commitment to the project outcomes, including the following institutions: the Coordinating Unit of the Water and Sanitation Millennium Program; Directorate of Rural Water; National Sanitation Agency of Senegal (Office National de l’Assainissement du Sénégal, ONAS); a public asset holding in charge of investments (National Water Company of Senegal, Société Nationale des Eaux du Sénégal, SONES); and a private utility (Senegalese Water Utility or SDE) in charge of delivering services. With a sound foundation in designing policies in the WSS sector, the GoS showed strong support for the project activities throughout the entire project life cycle.

A follow-up project, the Senegal Urban Water and Sanitation Project (UWSP) that was prepared with the support of this project is under implementation. The UWSP, is focusing on the construction of urban WSS infrastructure, and providing (a) support to the finalization of the next generation of reforms of the urban water and sanitation sector, including the bidding for a new lease (affermage) contract with increased responsibilities of the private operator in financing investments, the pursuit of synergies between water and sanitation services, and the reinforcement of sector regulation and (b) additional support to OFOR i.e. the Rural Boreholes Agency (Office des Forages Ruraux) in implementing the rural water sector reform initiated under this project.

The project was designed to primarily benefit urban and rural households by providing them with access to piped water and improved sanitation facilities. Poverty in Senegal is mostly prevalent in rural areas targeted by the project, whereas the social connections programs to be implemented in urban areas targeted peri-urban neighborhoods where most of the low-income urban households resided.