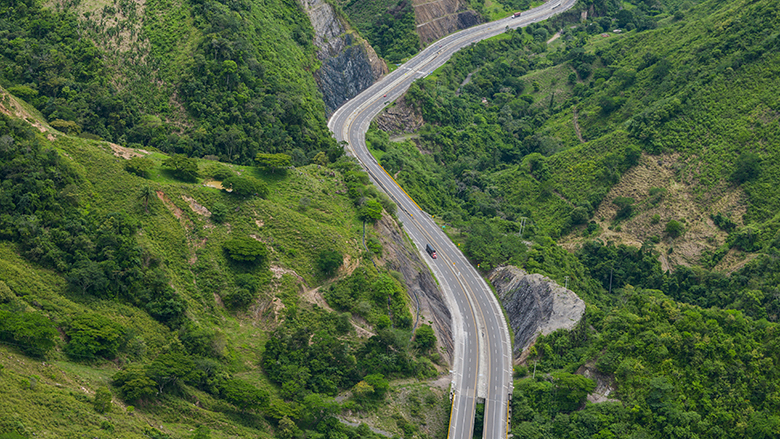 The efficiency and productivity of Colombia’s urban system have been considered essential components in the country’s transition from a middle-income, commodity-driven society to a higher-income economy rooted in knowledge and manufacturing. The efficient management of Colombia’s cities and urban areas is recognized as central to reducing poverty and inequality.  Although poverty rates are higher in rural areas, most of Colombia’s poor live in urban areas. In 2013, about 7 in 10 poor individuals in Colombia lived in an urban area (defined as metropolitan, medium, or small urban areas), and 6 in 10 were in the bottom 40 percent of national income distribution. Seventy-seven percent of Colombians live in cities, where unemployment has reached around 12 percent. Policies to improve productivity and living conditions in the nation’s cities thus have the potential, by focusing on urban areas, to contribute significantly to nationwide improvements in poverty reduction and shared prosperity.

The Productive and Sustainable Cities Development Policy Loans (DPL) provided an innovative instrument for use in the urban development and transportation sectors, which have traditionally relied on investment operations. The DPL was chosen as the financing instrument because it could provide the government with flexible financial support and foster the sector reforms essential for catalyzing investment and reducing the negative externalities of urban life (among them, pollution, congestion, and lack of affordable housing). DPLs were seen as complementary to knowledge services and technical assistance engagements.

The 2012 World Bank report “Colombia Urbanization Review: Amplifying the Gains from the Urban Transition” provided the government with concrete policy guidance on maximizing efficiency in urban governance. The report’s diagnostic analysis served as direct input into the National Development Plan 2014–2018. Moreover, each project-supported policy area was backed by analytical work under the Sustainable and Productive Cities Programmatic Approach.

Using a number of knowledge and convening services, the Bank supported formulation of the Congestion Charging Decree and the fourth-generation policy document of the Council of Economic and Social Policy (El Consejo Nacional de Política Económica y Social). In addition, the Bank’s Global Facility for Disaster Risk Reduction supported Colombia’s Ministry of Housing, Cities and Territory (Ministerio Vivienda, Ciudad y Territorio, MVCT) through the preparation, validation, and dissemination of a standardized methodology for the National Inventory of Settlements in High Risk Areas. These programs contributed to closing the gap in the availability of affordable housing. Finally, Bank studies on access to affordable housing, carried out in association with the Macroproyectos Social Interest Program Project, determined the supply- and demand-side constraints contributing to Colombia’s persistent housing deficit.

Under the 4G Roads Program, 912 kilometers of principal road network are now under integral maintenance contracts.

The Productive and Sustainable Cities DPLs supported the Colombia National Development Plan 2014–2018, the first structured using a territorial/regional approach recognizing the System of Cities framework and new National Urban Policy and using regional-level indicators to track progress. Results achieved during the life of the project (2013–2015) included:

The DPLs were designed and implemented during the two administrations of President Santos, providing continuity for the high-level policies in the National Development Plans for 2010–2014 and 2014–2018. Improved coordination across different institutions and levels of government also contributed to project success, including efforts by the following:

Through MVCT, the government implemented several programs to increase access to quality affordable housing, including the Social Housing Program (Programa de Vivienda Gratuita, PVG) and VIPA. The VIPA program aimed to increase access to affordable housing for low-income families with saving capacity. Beneficiaries of the program were families with two legal minimum salaries seeking to buy a house equivalent to seventy legal minimum salaries. The program benefitted 80,000 households between 2014 and 2016. In addition to contributing to the closing costs for buying a home, the program also enabled households with formal and informal incomes to gain access to the financial system. See https://www.youtube.com/watch?v=lr-c04yomIA for testimonies from beneficiaries.

Colombia’s national policy on sustainable and productive cities is defined by its urbanization guidelines, the System of Cities, and the National Development Plan (NDP). The NDP highlighted the importance of formulating a long-term policy to consolidate a System of Cities that leverages the benefits of urbanization while increasing regional integration.

The Ministry of Transportation (MoT) and the transportation sector more broadly have been working on guidelines to expand the use of electronic payment, particularly in the areas of infrastructure, transit, and transportation. MoT successfully regulated the interoperability system for toll roads with an electronic payment system and is currently working to expand that system to parking garages and gas stations.    Additional resources are required to continue strengthening these initiatives.

ANI reached agreements with Colombia Humanitaria and the Fondo de Adaptación to support the most affected corridors. It renegotiated contracts with concessionaires to adapt to the new reality, and it defined new technical and insurance standards for the 4G infrastructure to protect against natural disasters. Contracts under third-wave 4G are currently underway.