India: Improving Water Delivery for the Underserved in the State of Uttarakhand

The Uttarakhand Rural Water Supply and Sanitation Project helped over 1.57 million people by improving sustainable rural water supply and sanitation services across underserved areas. The project also helped to build institutional capacity to prepare for and manage the impact of natural disasters. From the project start in 2006 to the project closure in 2015, 852,721 households showed improved hygiene and sanitation practices. The is an exemplary project that demonstrates and effective approach to implementing rural water supply and sanitation services.

Characterized by the steep peaks and hills of the Himalayan mountain ranges, Uttarakhand is a northernmost state of India with a rural population of over 9 million people. The state suffered from water scarcity, crumbling Rural Water Supply and Sanitation (RWSS) infrastructure, and outdated technology. Water shortages, poor drainage facilities, and low water quality were the norm for this Indian state, particularly for its rural inhabitants. Inadequate operation and maintenance (O & M) of the RWSS infrastructure only worsened the situation.

For many villagers, particularly women, obtaining fresh water for domestic use meant traveling distances of over 1.6 kilometers. Of the households with access to RWSS services, only 10% were using the latrines and exhibiting sanitation-smart behaviors. As a result, water-related diseases loomed as a major health challenge facing rural areas. The lack of safe, sustainable, and reliable RWSS services affected not only people’s health, but also the state’s inclusive economic growth.

The project aimed to improve the effectiveness of RWSS services by supporting Uttarakhand’s sector reform process and implementation. The project moved from traditional supply-driven mode to decentralizing service delivery responsibilities, empowering the Panchayati Raj Institutions (PRIs) in planning, implementing, and maintaining the RWSS services. The project facilitated the formation of village-level committees, fully responsible for schemes at the village level, while the sector agencies are responsible for bulk water supply and multi-village schemes. Capacity building programs were tailored to the requirements of the state, district, and village level agencies. Independent technical and social audits helped in improving the technical and financial performance of schemes.

Under the project, disaster mitigation activities were piloted to support reconstruction and restoration of infrastructure damaged by severe flooding. In parallel, the project included investments in critical infrastructure to improve sustainable access to RWSS services, as well as to help people protect themselves from natural disasters. 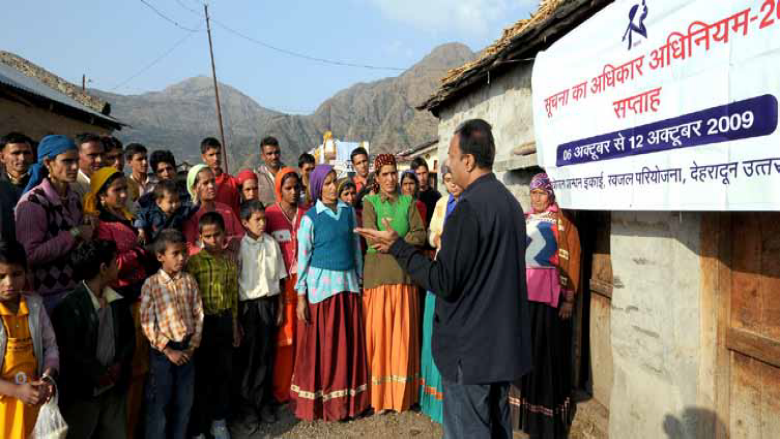 The following key results were observed during the life of the project:

The World Bank provided an initial International Development Association (IDA) credit of US$120 million, and Additional Financing was approved in form of an IDA credit of US $28 million. The actual project cost was US$251.86 million. Due to the World Bank’s previous project in the Indian states of Utter Pradesh and Uttaranchal from 1996 to 2003, the World Bank was well positioned in terms of geographic and technical expertise.

The project nurtured strong partnerships with the state government of Uttarakhand, with particular reference to the reform efforts in the RWSS sector. The State Water and Sanitation Mission (SWSM) provided substantive support through coordination and implementation of the project activities, with its Project Management Unit providing technical and financial support. The SWSM also played a key role in conducting capacity building activities.

Based on data collected at the end of the project, 90% of schemes were deemed sustainable based on technical, financial and institutional aspects. In particular, the RWSS functions were successfully decentralized and monitoring and evaluation systems were developed in-house, continued as part of the state agencies’ functions.

Further impact can be achieved through continuing to build the capacity of the village-level institutions in terms of technical aspects, procurement, financial management, and project management. The state government maintains commitment to the project activities and objectives through ongoing technical, policy, institutional, and capacity building support to ensure the implementation of RWSS decentralization programs.

“I see a visible change in the attitude of the engineers. It is satisfying that the engineers accept that people can conceive, plan, implement and monitor the water supply scheme. It gave us a sense of achievement as we have put in a lot of efforts to convince the technical staff on matters concerning social and environmental management including taking classroom sessions, analyzing case studies, showing the videos and documentary films and sometimes interacting with village committee members themselves.”

“We have benefited a lot from this scheme and our economic and health condition has improved since it started. We will not let this scheme fail. Also, we are happy that our neighbouring villagers such as Wank, Mundoli, Banodi, Dhuradhar and others have also started grey water management and increasing their income levels”.