One in five teachers in remote areas of Indonesia are often absent from school. KIAT Guru is a pilot program that is improving teachers’ attendance and service performance by empowering communities and tying teacher allowances to performance.

In Indonesia, one in five teachers are absent from schools. The KIAT Guru pilot provides evidence-based policy recommendations to improve teacher presence, teacher service performance, and student learning outcomes. The impact evaluation was conducted in 270 disadvantaged villages, improving the capacity of 1,800 community representatives and the accountability of 1,700 teachers, all of which serve about 26,000 elementary school students.

High levels of teacher absenteeism are an obstacle to improving education service delivery and outcomes in Indonesia’s poor and remote areas . A 2014 survey by the Analytical and Capacity Development Partnership showed that one in five teachers was absent from remote schools. Various studies correlate teacher absenteeism with student absence, drop-out rates, and poor learning outcomes.

The national budget for teacher salaries and allowances was approximately 50% of the education budget, or $16.5 million in 2016. As mandated by the 2005 Teacher Law, the Ministry of Education and Culture automatically provides teachers posted in special areas, including those in poor and remote locations, with an unconditional Special Allowance – a non-permanent stipend that is as large as the teacher’s base salary.

Unfortunately, recipients of the Special Allowance were found to have a higher rate of teacher absenteeism compared to those who did not receive the allowance in the same schools. Improved teacher welfare has not led to improved teacher performance or student learning outcomes. In addition, district governments are constrained in monitoring teachers in remote schools. In terms of learning outcomes, rural areas continued to significantly lag  behind urban areas.

(1)    Community Empowerment, which provides community representatives with an explicit role to monitor and evaluate teacher service performance, and

(2)    Pay for Performance, which ties payment of the Special Allowance with teacher presence or teacher service quality.

The pilot began in late 2016 and will take place until June 2018, with regulatory umbrellas and financial support from national to local (district and village) levels. The pilot covers 203 villages (with impact evaluation in 270 villages) in five districts (Landak, Sintang and Ketapang District in West Kalimantan; and Manggarai Barat and Manggarai Timur in East Nusa Tenggara). 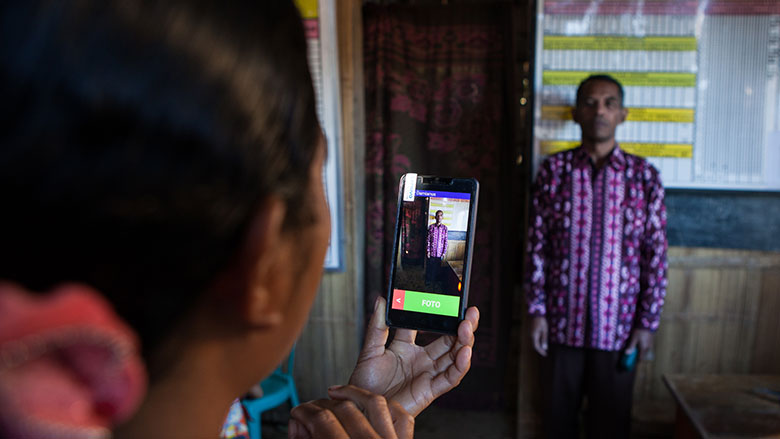 Teacher took photos with Android-based application called KIAT Kamera provided on a cellular phone  before the start and at the end of the school day. The time recorded is collected by the end of the month as proofs of teachers’ presence (Photo: Fauzan Ijazah). 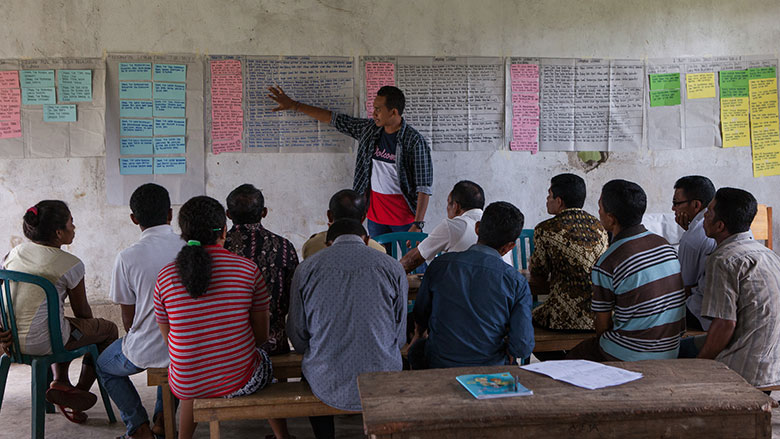 Every six months, teachers and the education user committee of Hawir Elementary School evaluate their service agreement indicators by assessing its implementation and amending them as needed to improve education quality. (Photo: Fauzan Ijazah/World Bank).

The KIAT Guru pilot project is a collaboration between the MoEC, the National Team for Acceleration of Poverty Reduction (TNP2K), and the district governments of Ketapang, Sintang, Landak, East Manggarai and West Manggarai. The pilot is implemented by Yayasan BaKTI, with technical support from the World Bank and funding from the Government of Australia.

The Government of Indonesia has requested that the policy recommendation be developed comprehensively to improve education service delivery, particularly in 122 disadvantaged districts and 13,000 very disadvantaged villages. In addition, the Ministry of Education and Culture has requested the implementation of a new pilot to improve teacher performance and accountability in the urban setting, using the government’s teacher Professional Allowance.

“In the past three months, none of the teachers were late. And it trickles down to the students. Seeing their teachers disciplined, the children are, too. They have better manners and rarely come late anymore even though many of them have to walk for 30 minutes to one hour to get to school,” said Andreas Jemahang, a KIAT Guru cadre in Kaju Wangi Village, East Nusa Tenggara, whose son studies at the Mboeng elementary school.