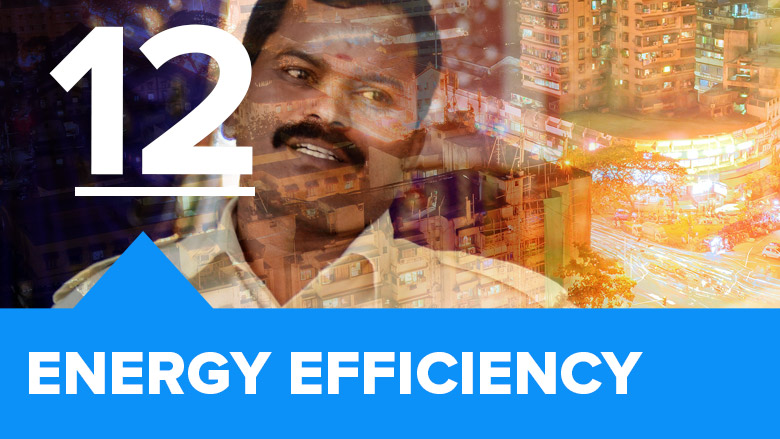 Energy efficiency—including residential, industrial and municipal energy savings—is central to achieving the energy and climate goals of countries around the world. It remains the lowest-cost option to meet national climate change commitments. For this reason, energy efficiency is often referred to as the ‘first fuel’, the resource to be used before all other energy options.

But despite this enormous potential, energy efficiency continues to be underutilized because of policy, technical, and financial barriers. Countries and development institutions such as the World Bank Group have learned that successfully implementing energy-efficiency programs at scale requires long-term engagement. Financing needs to be designed to suit local markets, and backed up by strong policies, regulations, and in some cases, incentives.

Countries are now developing the next generation of programs to tap this huge potential, including by aggregating purchases of energy-saving appliances and equipment; by creating revolving funds; and by improving national standards.

The International Finance Corporation (IFC), a member of the World Bank Group, promotes sustainable growth and private-sector development by investing in critical industrial and commercial infrastructure resource efficiency projects. IFC has been successful in aggregating smaller deals through credit lines paired with advisory support and blended finance, including through the China Climate Finance Advisory Program (CHUEE) which has provided over $625 million under risk-sharing facilities provided by IFC. This has financed 222 energy efficiency and renewable energy projects expected to reduce over 20 million tons of carbon dioxide every year.

In India, energy efficiency is critical to helping the country address the multiple challenges facing the power sector, moderate demand growth, and meet its climate change goals. India’s energy savings potential is enormous—about 15-30 percent across all sectors, with an estimated value of more than $11 billion. Industry and residential sectors offer the highest saving potential.   But India’s energy efficiency potential remains largely untapped, in part due to limited financing for these types of investments.

The World Bank has developed a growing partnership with Energy Efficiency Services Limited (EESL), which aggregates and finances residential and public sector energy efficiency in India. Established in 2009, EESL’s approach includes aggregating demand for energy-efficient appliances and equipment through bulk purchase agreements, providing financing, and aggressive marketing and promotion. Using a combination of financing sources, including equity capital from its promoters, along with loans from development partners and commercial lenders, EESL provides upfront financing for investments and can be repaid based on energy saved by consumers.

By developing a successful business model to serve smaller consumers, EESL is expanding markets for energy-efficiency products by driving down prices, making them more affordable to the broader market. It has already deployed more than 275 million LED bulbs, 4.2 million LED tube lights, and 4 million street lights in municipalities. As a result, retail prices of LED bulbs are now at parity with CFL bulbs, and further price reductions are expected. By 2020, LED is expected to account for 60 percent of the Indian lighting market.

In May 2018, the World Bank board approved the $300 million India Energy Efficiency Scale-Up Program to support India’s national efforts on energy efficiency through EESL. The Program, which combines a $220 million loan and an $80 million guarantee, will help scale up the deployment of energy saving measures in residential and public sectors, strengthen EESL’s institutional capacity, and enhance its access to commercial financing. This operation complements the World Bank Group’s growing program supporting supply and demand side efficiency in India, combining investment lending and technical assistance activities, including the ongoing Partial Risk Sharing Facility for Energy Efficiency (PRSF) project, with $18 million from the Global Environment Facility (GEF) and $25 million from the Clean Technology Fund (CTF).

It is estimated that the guarantee is expected to leverage some $200 million in additional financing, to help EESL with its growing portfolio and future investment needs.  Moreover, the Program will help to increase private sector participation in energy efficiency, including through private sector energy service companies. The EESL model is replicable and can be adapted to the contexts of countries all over the world.

Over its lifetime, the Program is expected to contribute to India avoiding greenhouse gas emissions of 170 million tons of CO2, and contribute to avoiding an estimated 10 gigawatts of additional power generation capacity. This would be over 50 percent of the National Mission for Enhanced Energy Efficiency target of 19.6 GW indicated in India’s Nationally Determined Contributions (NDCs) under the Paris Accord.