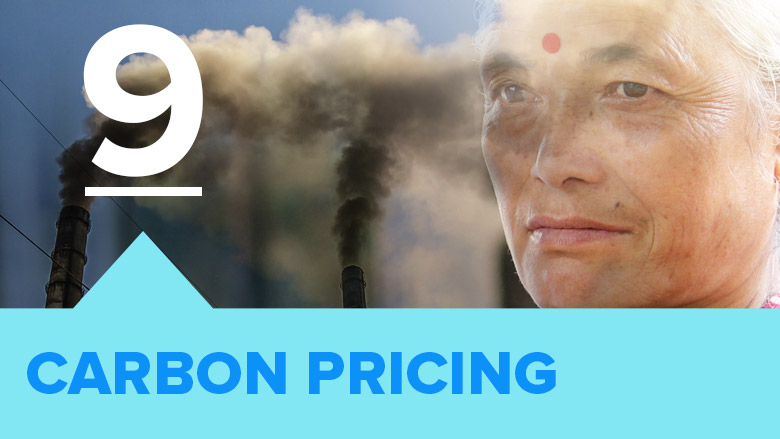 A coalition of global leaders is working together to promote carbon pricing policies worldwide.

A dangerously warming planet is not just an environmental disaster. Fundamentally, it is also an economic and social challenge. Putting a value or price on carbon emissions tackles climate change at its source.

Carbon pricing has the potential to radically decarbonize global economic activity by changing the behavior of consumers, businesses, and investors while unleashing technological innovation and generating revenues that can be put to productive use. In short, well-designed carbon prices offer triple benefits: they protect the environment, drive investments in clean technologies, and raise revenue. For businesses, carbon pricing enables them to manage risks, plan their low-carbon investments, and drive innovation.

According to the World Bank’s State and Trends of Carbon Pricing 2018, governments generated roughly US$33 billion in revenues from carbon pricing in 2017, an $11 billion bump from the $22 billion raised in 2016. The report also finds that carbon prices are rising, with about half of emissions now covered by carbon pricing initiatives priced at over US$10/tCO2e, compared to one-quarter of emissions covered in 2017.

The private sector is also stepping up. In 2017 nearly 1,400 companies disclosed the use of an internal carbon price, including over 100 Fortune Global 500 companies with collective annual revenues of $7 trillion. Also, in 2017, CDP and the We Mean Business Coalition launched the Carbon Pricing Corridors initiative, aiming to support key large market players to define the carbon prices required for industry to achieve the ambitions of the Paris Agreement.

However, despite promising progress, 80 percent of emissions are still not covered by carbon pricing. And half of current emissions covered by carbon pricing initiatives are priced at less than $10 per ton CO2e. This is far short of the level needed to drive transformational change: estimated at $40-80 per ton by 2020 and $50-100 per ton by 2030 according to the High-Level Commission on Carbon Prices, co-chaired by Joseph Stiglitz and Lord Nicholas Stern and supported by the World Bank.

Officially launched at COP21 in Paris in December 2015, the Carbon Pricing Leadership Coalition (CPLC) brings together leaders across national and sub-national governments, the private sector, and civil society. Its goal is to advance effective carbon-pricing policies that maintain competitiveness, create jobs, encourage innovation and deliver meaningful emission reductions. The Coalition’s efforts are focused on:

As of 2018, the CPLC has over 33 national and sub-national government partners, over 160 private sector partners, and over 70 strategic partners representing NGOs, business organizations, and universities. CPLCs work includes building the case for carbon pricing in Côte d’Ivoire; supporting peer to peer engagement among businesses in Brazil and India to strengthen their efforts to apply an internal carbon price; fostering leading voices in support of carbon pricing in institutions of higher learning; and, stakeholder engagement that led to the adoption of the Carbon Pricing in the Americas Declaration in support of carbon pricing as a key policy to tackle climate change.

The CPLC long-term objective is a carbon price applied throughout the global economy, with targets to double the percentage of global emissions covered by explicit carbon prices to 25 percent by 2020, and to double it again to 50 percent within a decade.