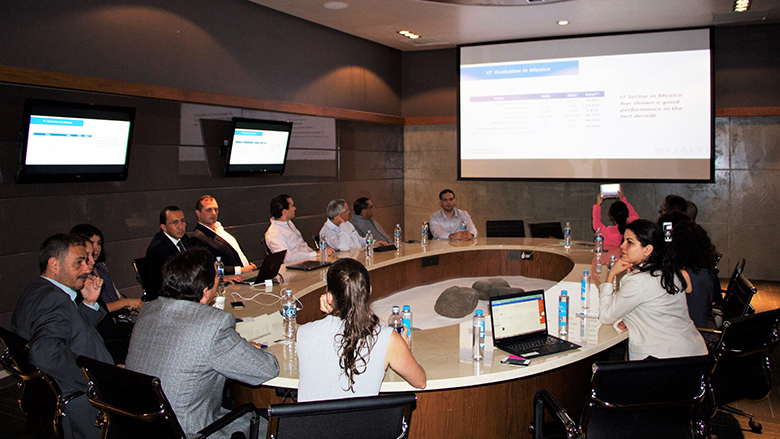 Mexico’s information technology outsourcing industry has been growing at an annual rate of 10 to 15 percent, amounting to roughly US$ 46 billion in exports, and Mexico is now considered the third-largest exporter country worldwide of information technology services. Mexico has recently moved to create more skilled jobs and foster preparedness for global competition in the industry. The offshoring of global services offered a distinct opportunity for Mexico to improve its competitiveness and generate employment. In 2002, Mexico’s information technology (IT) industry had a market value of US$ 3.95 billion and exported only US$ 1.75 billion. IT was deemed an essential ingredient in raising the productivity and improving the competitiveness of Mexican firms; however, the limited number of skilled and certified manpower was a major constraint for IT industry growth. The lack of a skilled workforce is a key challenge facing many developing countries as they try to build and promote their local IT industries. Programming and engineering are not always popular careers, and a gap often exists between what the IT industry requires and what universities produce. Because technology advances faster than training, skills development remains an issue in IT preparation programs around the globe. Soft skills, such as negotiation, management, and foreign language ability may also be in short supply.

The Information-Technology Development Project took shape in response to the 2006 request from the Mexican government to help it develop the nation’s IT industry through its Program for the Development of the Software Industry (PROSOFT), which was launched in 2004 to promote growth and create jobs in information technology and information technology–enabled services (IT/ITES). The project was one element of the government´s broader plan to invest roughly US$ 250 million in PROSOFT, with a strategy focused on expanding the number of jobs in the IT industry, addressing several critical human skills deficits, linking Mexican companies with multinational corporations, engaging in regulatory reform, and developing solutions for financing IT companies.

To help the IT/ITES industry ramp up and compete globally, the project created MexicoFIRST, a training institution focused on increasing the quantity and quality of its skilled IT workers through training grants for technical, managerial, and English courses; certifications; seminars and workshops for faculty, students, and industry professionals; and recruitment outreach for the IT industry.

The project’s industry-driven design relied on continuous dialogue with industry clusters and private companies to quickly address any gaps and/or identify new trends. Direct collaboration with the IT industry (including academia) to identify, prioritize, and propose many of the project activities, endorsed by the state governments, helped ensure the interventions’ relevance. The World Bank’s convening power, moreover, allowed the creation of an International Consultative Commission, which confirmed project activities were consistent with global IT industry trends.

MexicoFIRST.  MexicoFIRST has become the main provider of training grants for the country’s IT industry. Among its specific achievements are the following:

MexicoFIRST has become the main provider of training grants for the IT industry in the country, providing over 80,000 university students with courses, and has successfully bridged the talent gap between graduate capabilities and employer demands.

PROSOFT. PROSOFT’s contributions to strengthening Mexico’s IT industry include the following:

Approximately 700 companies received consulting and certification in IT international quality standards, improving their ability to compete in the global market.

Eight hundred public officials were trained on IT Sector Legal Framework, improving their capabilities to enhance an enabling environment contributing to increased IT industry competitiveness.

One hundred companies participated in the Financing IT accreditation program, spurring access to finance. IT companies’ debt portfolios in the financial system grew to US$ 47.2 million from the baseline of US$ 5.8 million.

Accessiblity. The MexicoFIRST program was designed to be affordable and accessible, with the following results:

The World Bank, through the International Bank for Reconstruction and Development, provided a loan in the amount of US$ 80 million to finance this Information Technology Development Project.

Partners contributing to the successful outcomes of this project included: the Ministry of Economy, which provided strong technical and administrative leadership for the project’s design and implementation within a context of complexity and multiple stakeholders; Nacional Financiera and the Ministry of Finance, both of which were highly collaborative, facilitating implementation and taking remedial action when needed; the National Chamber of the Electronics of Telecommunications and Information Technologies, as well as the Mexican Information Technologies Industry Association for active participation in project discussions to ensure trainings met industry needs; and state promotion agencies (notably in Mexico City, Jalisco, Nuevo León, Aguascalientes, Queretaro, Hermosillo, and Tabasco) endorsed and supported the states’ industry projects.

IT companies and IT professionals generally, as well as students pursuing IT-related degrees, constituted the main beneficiaries of the project intervention.  One example is Medisist, a 15-year-old company that sells healthcare research. Program training helped improve Medisist workers’ IT skills, resulting in growth, profit, and increased market share. With support from the project, Medisist invested in IT training and standardization that has led to improvements in its new software and consequently to expand customer satisfaction.

The Medisist management reports that the company is more competitive, and they hope to double the number of people Medisist employs from 60 to 120 within the next five years.

After the project, MexicoFIRST remained operational, and several of its training activities have been recognized as good practices. South-to-South knowledge exchanges in 2014 and 2015 brought delegations from Jordan, Egypt, and Nicaragua to Mexico for study tours to learn more about the project. The approach used in the MexicoFIRST program is now a model for other countries, including Nicaragua and Bangladesh.

To continue driving the sector development, the Secretary of Economy launched PROSOFT 3.0 in July 2015. PROSOFT 3.0 identifies 15 potential sectors where effective introduction of IT services could contribute to improving the country’s economic productivity.

Blog. Mexico first closing the training gap in the IT industry through public-private partnerships