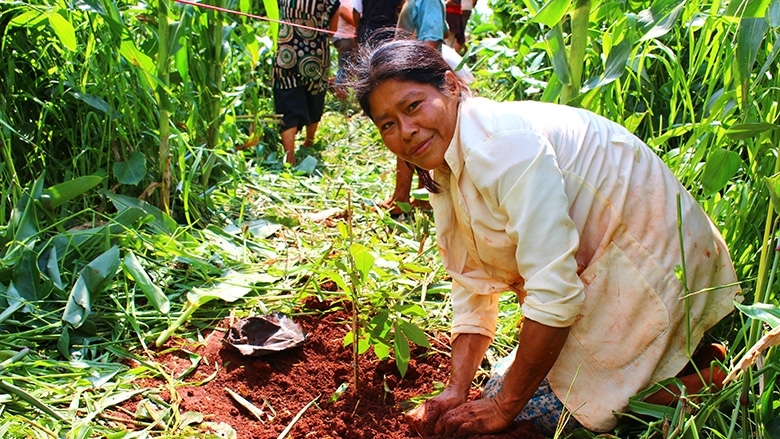 Beneficiaries of the Paraguay Biodiversity Project

More than 300,000 hectares of protected land was restored in Paraguay with the support of the government, farmers, indigenous communities and NGOs. More than 25,000 people benefited from the increased local capacity to manage protected forests, restore land, increase biodiversity conservation and reduce water pollution from agrochemicals used by farmers.

Deforestation levels in Paraguay were very high, and the country faced some of the most significant forest losses compared to global averages. The Atlantic Forest, considered Latin America’s most important biome for biodiversity after the Amazon Forest, is almost gone, even though it was flourishing in Paraguay, Brazil, and Argentina as recently as the 1970s. Today, only about 7 percent of the original forest remains in Paraguay. Paraguayans have witnessed this change with despair, but the nation has had limited opportunities to arrest or alter this trend.

The Conservation of Biodiversity and Sustainable Land Management in the Atlantic Forest of Eastern Paraguay project, commonly referred to as the Paraguay Biodiversity Project, was designed to serve as Paraguay’s first conservation model to use a landscape management approach based on a biodiversity corridor to support the restoration of the Atlantic Forest. ITAIPU Binational, considered the largest energy generator in the world, worked with the Ministry of Environment, the Ministry of Agriculture, the National Indigenous Peoples Institute (INDI), farmers, and NGOs to develop this large-scale restoration program aimed at providing the last refuge for many threatened species displaced by conversion of forest into agricultural land. A major challenge was the large size of the proposed corridor, covering one million hectares, and the distance between forest remnants. The implementation model developed in response had two key elements: (i) it included the participation of regional implementing agencies (among them NGOs, women’s groups, indigenous peoples’ associations and farmers’ cooperatives) to increase local ownership, and (ii) it instituted interventions designed by the same constituents. The emphasis was placed on engaging people to work together on restoration actions, rather than on cash transfers or results payments.

The participation of indigenous communities and INDI in the range of project activities was critical to reaching the desired project outcomes. Indigenous peoples, though often excluded and lacking basic services, hold some of the largest forest areas in the Atlantic Region, and their interest and engagement in the project was essential to its success. The project planners were committed to overcoming these challenges and to including INDI in the project structure, adjusting project methods to their languages, culture, vision and interests.

Many outcomes were achieved throughout project implementation. Particularly fruitful developments included the declaration by the Ministry of Environment that the corridor was a national public priority and the formation of a trusted civil society–government network encompassing 55 municipalities, 30 regional implementing groups, and more than 20,000 people working toward restoration of the Atlantic Forest. Other results included the following:

· Protected areas, private reserves, and ITAIPU reserves (80,000 hectares owned by the governments of Paraguay and Brazil) implemented sustainable conservation practices. In total, 233,353 hectares in the Mbaracayú–San Rafael Conservation Corridor were converted for this purpose.

· Biodiversity conservation efforts under the project supported the protection of the habitat of 296 bird species, including endangered and endemic species such as the Gray-bellied Hawk, Saffron Toucanet, Bare-throated Bellbird, Helmeted Woodpecker, Vinaceous Parrot and Rusty-barred Owl, all of which use the corridor’s habitats.

· New infrastructure for parks and the Ministry of Environment of Paraguay was constructed.

· Income and food security for small farmers and indigenous communities was supported through implementation of tailored subprojects, such as planting yerba mate, the traditional staple energy drink of Paraguayans, and installing bee hives to produce honey for family consumption and sale.

· A total of 130 staff from the Ministry of Environment and the Ministry of Agriculture benefited from specialized training on best international practices for managing protected areas, certifying forest production, and monitoring biodiversity, as well as focused studies in environmental economics, agroforestry, apiculture, integrated pest management, watershed conservation, and application of the environmental safeguards policies.

· A total of 5,445 teachers from180 schools in the corridor area benefited from an environmental education program that provided them with materials outlining the threats to the Atlantic Forest. These materials inspired these teachers and their students to participate in planting trees and promoting environmental awareness campaigns.

This project set up a unique and unprecedented partnership to foster ecological restoration in Eastern Paraguay’s biodiversity corridor in the Atlantic Forest. With the agreement of the Paraguayan Ministry of the Environment, the Bank and GEF selected ITAIPU, a hydropower plant, as the executing agency for this grant. ITAIPU is a Guarani word meaning “the sounding stone,” and it suggests the sound of the Parana River in the project site. ITAIPU’s previous experience working on the reforestation of the reservoir shore informed its work on the much larger corridor territory. Deforestation intersects with complex sectoral agendas, so ITAIPU was supported in strategic implementation decisions by a multisectoral team, comprised by representatives from the Ministry of Environment, the Ministry of Agriculture and INDI.

The project also established innovative partnerships for technical assistance and support for restoration initiatives with medium and larger producers in Eastern Paraguay. These producers included, for example, the cooperatives Yguazu, Agro-silo Ybyporá, and Chololo SRL in an innovative partnership to support sustainable heart of palm production within forestlands. Altogether, the local network extended to more than 50 organizations, including local NGOs, farmers’ associations, indigenous groups, cooperatives, and others. The network became the critical link for implementing more than 1,100 subprojects to enhance ecological restoration of the Atlantic Forest, increase food security and conserve water.

ITAIPU contributions, combined with financing from the government of Paraguay and in kind contributions from beneficiaries increased local ownership.

The collaboration of many different sectors working together to protect their gran casa, or great house, inspired many government agencies, communities, and stakeholders across the country with the possibility of rebuilding the connectivity of the forest and the home habitat of many threatened species and of increasing the area’s resiliency to climate change.

Indigenous peoples were the project’s largest beneficiary group, with about 40 percent of the funds allocated to implement subprojects in these communities. The indigenous communities as well as organizations working with indigenous peoples (IP) in the region partnered with the Project Implementation Unit (PIU) in implementing the project. The local IP implementing groups included Asociación Cultural Popular Canindeu, Asociación Yvy Marane’y, Asociación Madre Tierra, Comunidad Ache Puerto Barra, and Asociación Nande Ru Simeon Delgado, among others.

The beneficiaries in the government include staff at central ministries and local governments, including the Secretariat of Environment, Ministry of Agriculture and Livestock, National Indigenous People Institute, National Forestry Agency, Public Ministry, Ministry of Education, and 55 municipalities.

Twenty NGOs, including long-standing organizations dedicated to conservation and sustainable production at local and national levels, were also beneficiaries. The project enabled them to advance their sustainability and conservation objectives and to function as service providers.

Itaipu Binational has incorporated a landscape and conservation corridor approach to its reforestation program and expanded its watershed protection programs. ITAIPU continues to support the Paraguay Biodiversity Project and the indigenous communities and producers that participated in the project through the provision of additional technical assistance to ensure the sustainability of investments. To this end, a Reimbursable Advisory Services agreement was signed with the World Bank, valued at US$850,000, to continue ITAIPU’s work in consolidating and restoring the Atlantic Forest Corridor. Additional funds from the Program on Forests and other trust funds have also been leveraged to further the sustainability efforts initiated with this GEF grant. Furthermore, the results achieved under this project played a role in UNESCO’s decision to include this corridor as part of a ITAIPU Biosphere Reserve, as it recently declared in Paris.