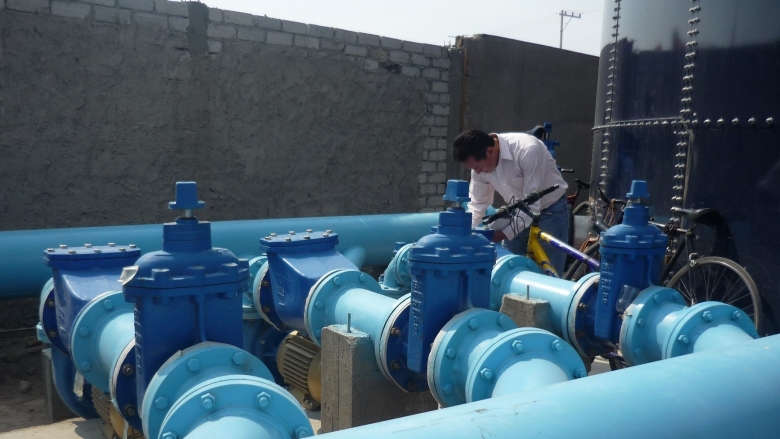 The government of Mexico, through its National Water Commission, has helped more than 90 water operators improve the efficiency of the water supply services they provide to their urban populations.

In 2005, nearly 98 percent of Mexico’s urban population had access to an improved water supply source. However, the quality of these water services was lagging due to the high level of inefficiency and the low financial sustainability of the service providers. Piped water was generally supplied for half the day, far below the 24-hour norm for other member countries of the Organization for Economic Co-operation and Development. The weighted average of non-revenue water (NRW) for utilities serving populations over 50,000 inhabitants was 38 percent; the consumption of more than one-third of utility customers was not metered, and over 20 percent of bills went uncollected.

The Mexico Water Utilities Efficiency Improvement Project (Programa de Mejoramiento de Eficiencia de Organismos Operadores, PROME) was aligned with the government’s vision of reducing sector subsidies by improving the quality of existing services through management and efficiency gains. The project also supported a policy goal of increasing the national average of utilities’ global efficiency from 36 percent to 44 percent. The project was one of several federal programs aimed at using subsidies as an incentive to improve performance.

The project was designed as a scale-up of a US$ 25 million loan (2005–2010), under which 18 large water utilities across the country improved their commercial, physical, and energy efficiency. PROME expanded the scale and geographic scope of that effort, targeting any water utility willing to design and implement an investment strategy and action plan and to monitor changes across a variety of performance indicators. Through the project, utilities could access (i) technical assistance funds to assess their current situation and design investment strategies and action plans to improve performance; and/or (ii) investment funds to realize those improvements.

The PROME technical assistance support and investment program reached 91 water utilities across 25 states in Mexico between 2011 and 2015. Working through the centralized National Water Commission (CONAGUA), the project promoted the use of standardized indicators at scale that CONAGUA could aggregate and track.

During the project’s implementation period, the following results from beneficiary utilities were reported by CONAGUA:

·       25 utilities increased revenue by at least 5 percent per cubic meter of water produced.

·       8 utilities increased in global efficiency by at least 2 percent.

·       Several utilities confirmed that PROME support was essential to their long-term improvements in overall performance. For example, the utility SEAPAL in Puerto Vallarta, in the State of Jalisco, leveraged Bank funding through PROME and its predecessor project to help reduce total water production while serving a customer base that grew by 35 percent over the last 10 years.

·       Implementation of 500 individual utility improvements, including installation of household meters; network and pump rehabilitation; and replacement of electromechanical equipment.

·       Capacity building, on themes such as standardization of best practices in procurement, provided to utilities of various sizes and levels of efficiency.

·       PROME-funded diagnostics and studies that helped utilities further reduce costs and improve efficiency. The PROME-funded investment plan for the city of Guanajuato, for example, once implemented, is expected to increase physical efficiency by 10 percent, reduce NRW by a third, and save US$1.5 million in energy costs per year.

The World Bank, through the International Bank for Reconstruction and Development, provided a loan in the amount of US$100 million to finance the Mexico Water Utilities Efficiency Improvement Project. Counterpart contributions of US$62 million, which came from a mix of state, municipal, and utility (cash flow) local resources, complemented this initial loan amount. PROME was a small part of a large envelope of federal investment programs made available to utilities for infrastructure and operational improvements.

As mentioned above, the Bank investment leveraged US$62 million in counterpart funds. CONAGUA coordinated with each state through a multiyear sector-development plan that formed part of a larger Coordination Agreement detailing the financial support from CONAGUA and the individual state. The process included standardized diagnostic templates at the utility level, which were developed under the project and are still in use today. CONAGUA’s regional offices provided coordination and capacity building for utilities in procurement and finance. Such coordination has helped standardize key functions of the sector to make implementation of investments more efficient.

PROME aimed to benefit primarily decentralized water utilities in urban communities with more than 20,000 inhabitants by increasing their capacity and ability to provide efficient, reliable water and sanitation services to their users. The water saved safeguards future water supply. Lower production costs can translate into lower service fees to customers in the long run. Installation of micrometering improves monitoring of water use and can aid in demand management programs by identifying wasteful practices. Improvement in the financial situation of water utilities ultimately increases the chances of expanding services to poor areas previously too costly to reach.

One example is provided by a section of 30,000 low-income inhabitants in downtown Guanajuato who were isolated from the central water distribution system. The community relied on untreated surface water, and during the dry season it was forced to ration users to 10 to 30 percent of water supplies. Through a US$4 million investment, the utility reduced energy costs by 20 percent and water production costs per person by 3 percent while connecting the downtown area, which now receives formal services. These improvements eliminated the need for residents to pay for higher cost/lower quality substitutes.

The experience gained under PROME provided lessons to CONAGUA on how best to improve efficiency in water utilities across the country. These lessons are being taken up by other federal programs and include some key mechanisms for ensuring results reporting, better prioritization of investments, ensured delivery on agreed investments, and stronger linkages between sector goals and investment values. Systematized data collection and benchmarking are still at a nascent stage, and in 2016 CONAGUA began rolling out a statewide benchmarking pilot project. Other partners—including the Inter-American Development Bank—continue to invest in efficiency improvements at the utility level, building on PROME achievements.