Rapidly Assessing the Impact of Hurricane Matthew in Haiti 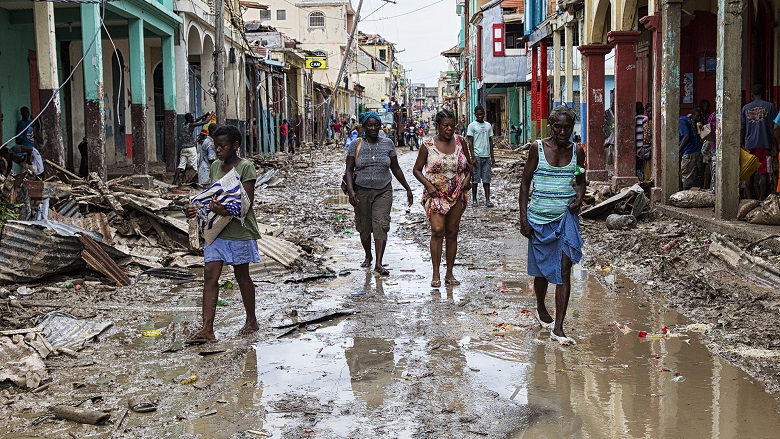 The rapid assessment allowed the identification of populations in need of urgent assistance, including over 30,000 children in affected schools.

The Haitian population is one of the most exposed in the world to natural disasters, including hurricanes, floods, and earthquakes. The number of disasters per kilometer tops the average for other Caribbean countries. The Germanwatch Global Climate Risk Index ranked Haiti third in the world in 1995–2014 for impacts from climatic events, and the country is among the ten zones in the world considered most vulnerable to climate change. In 2008, tropical storms and hurricanes caused losses estimated at 15 percent of GDP. The earthquake on January 12, 2010, killed 220,000 people, displaced 1.5 million people, and destroyed the equivalent of 120 percent of GDP. These disasters tend to disproportionately affect the poorest and most marginal populations, those settling in the flood zones and coastal areas particularly affected by tropical storms. Almost 50 percent of damage and losses to the productive sectors have been concentrated in the agricultural sector. Based on available historic data, weather-related disasters are estimated to have caused damage and losses in Haiti amounting to about two percent of GDP on average per year from 1975 to 2012.

Hurricane Matthew struck Haiti on October 4, 2016, as a Category 4 hurricane. The combined effects of wind, coastal flooding and rain caused heavy flooding, landslides, and the destruction of a great deal of infrastructure, agricultural crops and natural ecosystems. In all, 546 people were killed, more than 175,500 people sought refuge in shelters, and about 1.4 million people required immediate humanitarian assistance. An assessment of the damage and losses had to be carried out very quickly to unlock financial resources from the World Bank Group (WBG) and the International Monetary Fund to provide the assistance needed by those affected by the disaster.

The WBG, in partnership with the Inter-American Development Bank, closely supported the client through data gathering from field visits, phone surveys, and satellites and drones, as well as simulations through modelling. A full report assessing the damage and losses was delivered less than two weeks after the request, a task that usually takes at least three months. This rapid assessment covered all affected sectors and was the first multi-sectoral evaluation of the socioeconomic impacts of the hurricane as well as of its macroeconomic effects and impacts on individual and household income.

Matthew was a Category 4 hurricane, an event predicted to occur only once every 56 years. It inflicted damage and losses in Haiti estimated at the equivalent of 22 percent of GDP. Specific impacts of the hurricane included the following:

Assessing in record time the damage and losses, as well as identifying the most affected sectors and the potential human costs, led to rapid reallocation of about US$50 million from the Bank’s ongoing portfolio. The enabled responses included:

These rapid interventions not only helped to minimize losses in the winter harvest and prevent widespread famine, they also helped contain the cholera outbreak and limit migration and violence.

The World Bank, through the International Development Association (IDA), reallocated US$50 million from ongoing projects to the affected sectors. In addition, US$100 million under the IDA Crisis Response Window were mobilized for four additional financings to relaunch heavily damaged agriculture, restore connectivity through transport infrastructure and provide a robust cholera response.

Bank support focused on sectors with limited technical capacity, and particularly those sectors with counterparts in the government. The support promoted local ownership of the assessment by each of the line ministries while ensuring implementation of a standardized methodology. The rapid assessment benefited from joint support from the Inter-American Development Bank teams, FAO, UNICEF, and UNEP. In addition, the IMF mobilized US$ 41 million under their Rapid Credit Facility to help with urgent balance of payments needs in the aftermath of Matthew.

The rapid assessment allowed the identification of populations in need of urgent assistance, including over 30,000 children in affected schools. The assessment also provided information for effective targeting of rehabilitation efforts: about 45 school roofs and school grounds were rehabilitated, 60 semi-permanent shelters were built, and 4,000 pieces of school furniture (benches, desks, blackboards, etc.) were distributed, enabling schools to reopen and to increase their capacity in the short and medium term. In addition, 16,000 student kits (bag, books, notebooks, pens), 900 teacher kits (including dictionaries, compasses, rulers, maps), and 151 school kits (including blackboards and chalk) were distributed. Further efforts included providing 22,000 students in 90 schools in affected regions (Grand’Anse, Sud, and Nippes) with a daily snack and hot meal, as well as water-treatment and sanitation kits, soap, de-worming medication, vitamin A and cholera-prevention hygiene training.

Subsequent interventions targeted 1.5 million beneficiaries in areas with limited health service delivery infrastructure. Isolated populations in the southern peninsula benefited from the provision of health services through mobile clinics, and in Nippes, Grande-Anse and Sud,

300,000 children benefited from the restoration of basic infrastructure for immunization and vaccine cold chains.

This rapid damage and losses assessment fed into the more thorough Post-Disaster Needs Assessment (PDNA) undertaken under the leadership of the Haitian Ministry of Planning, with support from the World Bank Group, the European Union, the Inter-American Development Bank, UNDP and various UN agencies. The PDNA was finalized in early January 2017 and launched by the President of the Republic in early February 2017. More importantly, this rapid assessment was instrumental in drawing up the needed framework and quickly moving from emergency response to recovery. Finally, this rapid assessment served as an important input to the preparation of the Bank’s first financing to reach the Board post–Hurricane Matthew. An International Development Agency education grant of US$ 30 million to maintain access to quality education in the areas most affected by Hurricane Matthew, delivered to the Board approximately five weeks after the disaster, was approved in November 2016.