Women and Remittances: Three takeaways from Project Greenback in the Western Balkans

The gender roles in sending, receiving and utilizing remittances is oftentimes overlooked given the general focus on the household. However, the World Bank experience with Project Greenback[1] in the Western Balkans[2] revealed some clear differences between men and women in terms of behaviors and attitudes related to remittances. Accounting for these differences is important for public authorities and remittances industry in their efforts to maximize the development impact of remittances in the region as a vital source of income and a gateway to broader financial inclusion.

Women’s role as remittance senders is increasing over time, prompting greater focus on women and confirming the need for tailored support to this target group. For the Western Balkans, the man in migration has been traditionally deemed the breadwinner of the household, while the woman has typically stayed in the home country to raise the children and cater to the family needs. This was also true for remittances, as men represented the bulk of remittance senders. However, there is a noticeable shift in the migration dynamics over time. While at first many men would migrate alone particularly towards Western Europe, over time families have reunited once documentation and financial barriers have been overcome. Furthermore, women have also started to migrate more on various capacities. The gender-equalizing trend is most notable in some corridors, such as Greece – Albania or Italy – Albania, where women represented only 20 percent of the migrant stock in early and mid-90s, but their share doubled in the early 2000s[1]. This increase in migrant stock has also affected the remittance volumes sent back to Albania. 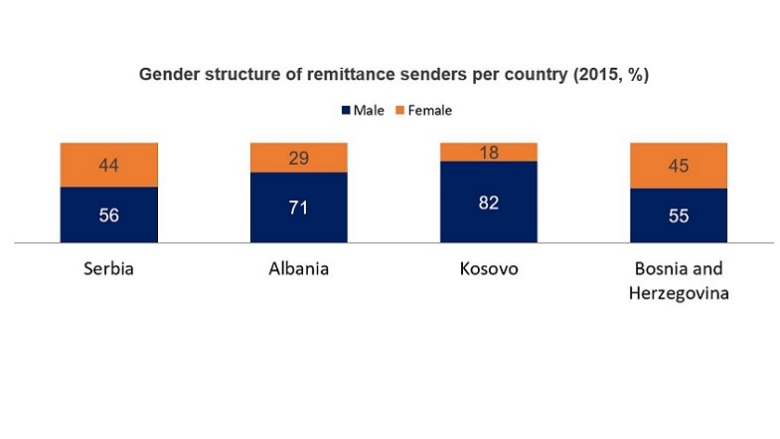 [1] The insights presented here originate from focus group discussions with at close to 400 remittance senders and receivers from the Western Balkans as well as data from the Baseline Survey on Remittance Beneficiaries’ Financial Behaviors in East Europe and Central Asia by the World Bank (2017).

[2] Project Greenback in the Western Balkans is being implemented in Albania, Bosnia & Herzegovina and Kosovo as part of the SECO-funded Remittances and Payments Program since 2015.

When it comes to how remittances are spent, men make the big decisions, while women execute day-to-day transactions in the household. According to the focus group participants in the Western Balkans, financial decisions for significant expenses are generally taken jointly between the man and the woman in the household. The roles are more explicitly separated in the case of women receiving remittances from husbands abroad, who are almost entirely dependent on remittances to cover living expenses. Out of 2,036 individuals surveyed in the Western Balkans for the Baseline Survey conducted for the Remittances and Payments Program, over 900 were housewives or unemployed women receiving money from their husbands abroad. In such cases, the decisions on big ticket expenditures were most often made by the sole provider of income– i.e. the husband—who would “earmark” funding for specific purposes, while the wife would execute transactions and manage daily expenditures. In this context, financial education for women is equally important for women as it is for men and such efforts should take into consideration the differing use cases that have emerged through research.

Women are less financially included then men but not less financially savvy. As a result of the broader gender dynamics in these societies, women have typically not been involved in making choices on how remittances are sent or received and how much. Furthermore, fewer women have access to accounts so most of their transactions are likely to happen in cash. However, lack of financial capability is not necessarily a challenge as women need to take meticulous account of their spending and estimate needs to let their husbands know of the need for a transfer in case of remittances or manage the daily needs of the family for a specific time. In addition, according to the focus group discussions, women tend to send some remittances to their own kin, even when married and having their own family and even though this means sacrificing a larger portion of their personal disposable income. As a result, women may face higher costs and a narrower set of financial products to choose from to meet their day-to-day needs. Financial service providers, especially those focused on remittances, have yet to leverage this untapped potential through their product design and outreach. 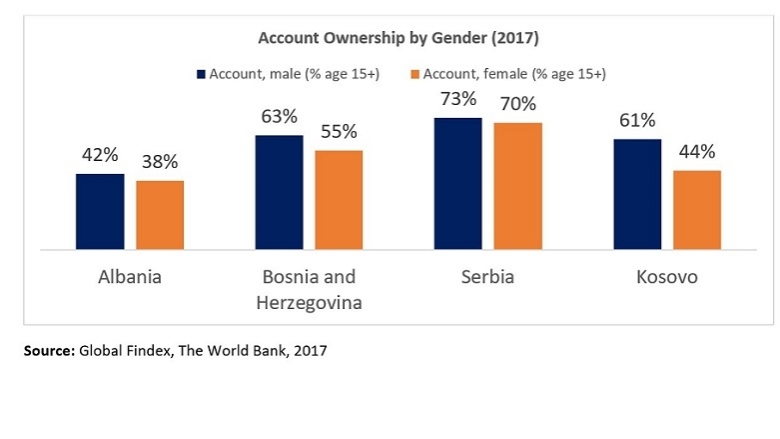 Taking all into consideration, applying a “gender lens” is critical for developing and delivering suitable and effective remittance services for the Western Balkans. As women make up a major user group for remittances, it is important that such products and services address some of the additional barriers that women face to unlock greater remittance flows via regulated service providers. Furthermore, additional guidance on how women can leverage remittances as a gateway to their broader financial inclusion, employment, and entrepreneurship as applicable is needed to make the most out of remittances.