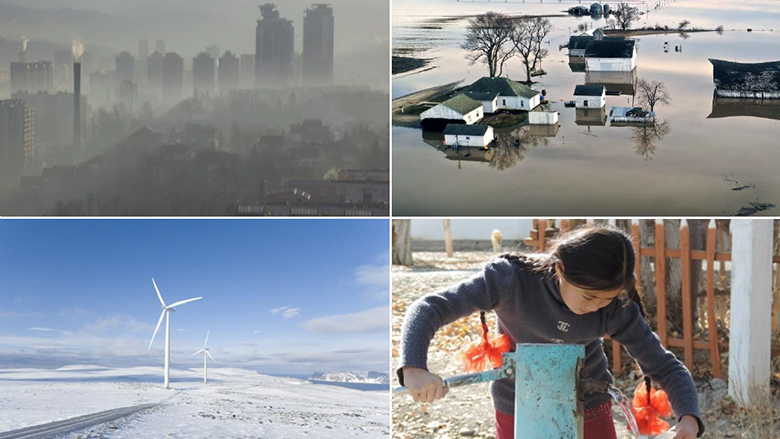 The Europe and Central Asia region faces increasing vulnerability to climate change, as warmer temperatures and more volatile weather patterns disrupt ecosystems and increase the frequency of extreme droughts, floods, heat waves, and forest fires. The poorest countries and most vulnerable households are likely to face the worst impacts of climate change, through lost livelihoods and environmental degradation.

While the financial cost of protecting and strengthening the resilience of countries in the region to the impacts of climate change is substantial, it is far outweighed by the cost of inaction or delayed investments. If no action is taken, economic damages from droughts and floods in Central Asia are projected to be up to 1.3% of GDP per annum, while crop yields are expected to decrease by 30% by 2050, leading to around 5.1 million internal climate migrants by that time.

Even European Union countries will experience large impacts – without adaptation more than 400,000 jobs are expected to be lost annually by 2050, with the overall cost of climate-related extreme weather reaching €170 billion by the end of the century.

However, many of the investments needed to protect countries from climate change generate large economic dividends and can also be sources of jobs and earnings opportunities.

Energy-hungry economies, substantial demands for heating, and a high energy and fiscal reliance on fossil fuels mean that countries in Europe and Central Asia are a major source of greenhouse gas (GHG) emissions. In fact, 10 of the 20 most GHG emissions intensive economies in the world are in this region, and around three-quarters of those emissions come from energy production and use – especially natural gas and coal.

Countries in Europe and Central Asia have all made commitments to decarbonize and will face significant challenges in a rapidly changing global policy environment. With many countries in the region still needing to make substantial progress in transitioning toward market economies, structural and institutional reforms must accompany climate action to ensure that public investments are productive and to unlock billions in potential private climate finance.

At the same time, the climate transition also creates opportunities to accelerate much-needed economic diversification and promote modernization in countries across the region. Moreover, many countries have a unique opportunity to make use of their landscapes – countries in Europe and Central Asia are the world’s largest source of carbon absorbing boreal forests and grasslands – as a source of climate mitigation.

In addition, the climate transition in the region can be catalyzed by the European Union’s Green Deal, which creates market incentives for countries in the region to accelerate decarbonization – through the carbon border adjustment mechanism (CBAM), for example.

The market and climate transition in Europe and Central Asia will have large and uneven impacts, with some workers and communities hit especially hard, as labor markets shift from brown to green jobs, and energy prices adjust to new market realities.

While all countries in the region stand to benefit over time, there will be short- and medium-term challenges. Moreover, governments are approaching the climate transition in a post-pandemic context of slower growth, higher poverty, and diminishing fiscal space – raising both fiscal and political economy challenges to the transition.

Over the period 2021-2025, the World Bank Group will significantly enhance its support to the Europe and Central Asia region’s climate transition, including through:

To be socially, politically, and financially sustainable, the climate transition must support countries’ development needs and ensure Just Transitions for workers and communities.

Learn More - Around the Region

Supporting Kazakhstan on its Path to Decarbonization and Carbon Neutrality

To Outpace Climate and Disaster Risk, Romania Is Counting on Innovation

From Paris to Glasgow and Beyond: Towards Kazakhstan’s Carbon Neutrality by 2060