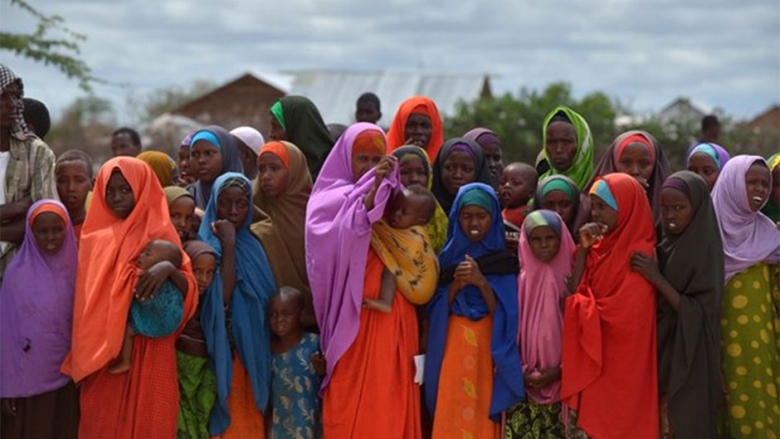 Although great strides have been made towards poverty reduction in Africa, the region hosts half of the world’s extreme poor. Latest estimates suggest that the share of the African population in extreme poverty declined from 57 percent in 1990 to 41 percent in 2013 (Beegle et al. 2016, World Bank 2016a). Yet, the world’s extreme poor will be increasingly concentrated in Africa: 389 million people in Africa were still living on less than US$1.90 a day in 2013, more than in all other regions combined (World Bank 2016a). Poverty reduction in Africa also lags other regions: East Asia and South Asia started out with similar poverty rates in the 1990s, but their poverty rates are much lower today at 4 percent and 15 percent respectively (Beegle et al. 2016, World Bank 2016a). Lastly, the region not only houses the largest number of the poor, but Africa’s poor are, on average, living much further below the US$1.90-a-day extreme poverty threshold (World Bank 2016a). Ending global poverty therefore requires urgent action in Africa and a social inclusion lens will be indispensable towards this: It takes poverty analysis beyond identifying correlates to uncovering its underlying causes, asking questions such as why certain groups are overrepresented among the poor and why some people lack access to education, health or other services.

Social inclusion is the process of improving the terms for individuals and groups to take part in society (World Bank 2013a). Individuals take part in society through three interrelated domains: markets (e.g. labor, land, housing, credit), services (e.g. electricity, health, education, water) and spaces (e.g. political, cultural, physical, social). To improve the terms on which people take part in society means to enhance their ability, opportunity and dignity. Identity is the key driver of social exclusion: Individuals and groups are excluded or included based on their identity. Among the most common group identities resulting in exclusion are gender, race, caste, ethnicity, religion, age, occupational status, location, and disability status. Social exclusion based on such group attributes can lead to lower social standing, often accompanied by lower outcomes in terms of income, human capital endowments, access to employment and services, and voice in both national and local decision making. In Africa, while social exclusion has many faces, some stand out:

The number of youth in Africa is growing rapidly, presenting both opportunities and risks. 50 percent of the population in the region are under 25 years of age (World Bank 2014). By 2050, Africa will have 362 million people aged between 15 and 24 (World Bank 2014). This rapid increase contrasts starkly with the Middle East and North Africa, where increases in the size of this cohort have steadied, and even with East Asia, where numbers are dominated by China and the size of this cohort is expected to fall from 350 million in 2010 to 225 million by 2050 (World Bank 2014). With the right policies and programs in place, a young population offers tremendous opportunities for a “demographic dividend”. Yet, over the next 10 years, only one in four of Africa’s youth are expected to find a wage job at best (World Bank 2014). This lack of opportunities not only threatens the realization of the demographic dividend. At its worst, it can contribute to radicalization and violence. A study in Kenya, for instance, suggested that 57 percent of al-Shabaab respondents joined the group when they were below 24 years (Botha 2014).

The opportunities for women in Africa are constrained, not least, due to violence and insecurity. 46 percent of women in Africa have experienced either non-partner sexual violence or physical or sexual violence by an intimate partner, or both (World Health Organization 2013). In the Democratic Republic of Congo (DRC), for instance, approximately 1.7 to 1.8 million women reported having been raped in their lifetime (Peterman et al. 2011). Access to maternal health services is still a challenge, so that childbirth remains a potential threat to the life of women: Over 200,000 women in Africa still die each year giving birth (World Bank 2015a). Women’s lack of voice in decisions that concern their lives is at the center of many of these issues. In Malawi and DRC, for example, 34 percent and 28 percent of married women respectively are not involved in decisions about spending their earnings (World Bank 2011). At the same time, 26 percent of households in Africa are headed by women, forming a particularly vulnerable sub-group (Beegle et al. 2016). Yet, Africa also has a high rate of female entrepreneurship at 33 percent (World Bank 2016b), speaking to the potential and resilience of women in the region, which can contribute to an acceleration in the development of the continent.

Forced displacement is another inclusion challenge in Africa. A symptom of conflict, persecution, human rights abuses, natural disasters and failure of governance, the region hosted 5.1 million refugees at the end of 2016, 30 percent of global refugees (UNHCR 2017). While refugees are faced with aid dependency and a life in encampment situations, the communities hosting them often belong to the poorest and most excluded in their respective country, living in secluded and underdeveloped borderlands. Turkana County in Kenya, for instance, which is home to the Kakuma refugee camp, has a poverty rate of 88 percent compared to the national average of 45 percent (Kenya Bureau of Statistics 2014). Protracted refugee presence adds to the challenges for these host communities. Severe environmental degradation, for example, has tremendous impacts on their livelihoods. However, refugee presence also comes with positives for host communities: The Gross Regional Product (GRP) of Turkana increases permanently by 3.4 percent as a result of refugee presence and total employment increases by 2.9 percent. Consumption measures within 5 km of the camp are up to 35 percent higher than in other parts of the county (Sanghi et al. 2016). With the right measures in place, inclusive development of refugees and hosts can be fostered.

Protracted conflict in the region has also created another group at risk of exclusion: ex-combatants. 20 countries in the region are categorized as fragile or conflict affected[1]. The Horn of Africa and the Great Lakes Region have been in conflict for over 20 years. In 2015, the World Bank estimated that there were 194,000 combatants in armed groups in Africa[2]. A 2016 study commissioned by the World Bank-administered Transitional Demobilization and Reintegration Program (TDRP) on armed movements in Mali found that youth comprised the majority of the ex-combatants, with the 18-40 age group representing 79 percent of them. The majority of the ex-combatants interviewed were married (76.7 percent), and 67.4 percent of them supported 6-10 dependents, pointing to the strong need for supporting and reintegrating them (World Bank 2017a).

Almost 1 in 10 working-age adults in Africa has a disability (Mitra et al. 2013) [3]. Persons with disabilities oftentimes have lower primary school completion and lower employment rates than persons without disabilities. Among seven African countries for which comparable data from the World Health Survey (WHS) is available, Mauritius has the largest disparity (23 percent) in terms of average years of schooling while Malawi has the largest disparity (33 percent) in terms of primary school completion rate (Mitra et al. 2011). Lower access to services is often caused by stigma and discrimination, which in the extreme can threaten the life of persons with disabilities. Persons with albinism, for instance, are faced with dangerous myths in several parts of Africa: It is believed that they are ghost – not human beings – and that their body parts can bring wealth and good luck (Under the Same Sun 2014). In Tanzania, these cultural attitudes have resulted in 72 documented deaths of persons with albinism between 2007 and 2013 (Under the Same Sun 2014).

Current trends in Africa contribute to these challenges of exclusion. Due to population momentum, for example, the number of people living in extreme poverty in Africa increased by more than 100 million although their population share declined (Beegle et al. 2016). In addition, inequality poses a challenge: Seven out of 10 most unequal countries are in Africa (Beegle et al. 2016). The region is also undergoing rapid urbanization with 40,000 new urban dwellers per day: Over 450 million new urban dwellers are expected between 2010 and 2040, with half of Africa’s population living in urban areas by that year (World Bank 2013b). While urbanization offers opportunities and demand for social mobility and changes norms and values, it also creates polarization: About 70 percent of Africa’s urban population lives in informal settlements (World Bank 2013b). Lastly, climate change is affecting the poorest: It is estimated that by 2030, up to 118 million extremely poor people will be exposed to drought, floods, and extreme heat in Africa (Shepherd et al. 2013).

Yet, there are opportunities to be built upon towards inclusive development in Africa. At 4.5 percent per year over the past two decades, average economic growth in the region was remarkably robust (Beegle et al. 2016). Technology opens new avenues to reach out to the most vulnerable: the number of fixed and mobile phone lines per 1,000 people increased from three in 1990 to 736 in 2014, and the number of internet users per 100 people increased from 1.3 in 2005 to 16.7 in 2015 (World Bank 2017b). Innovation and entrepreneurial spirit can further contribute to lifting people out of poverty and exclusion: African tech startups raised funding in excess of US$129 million in 2016, with the number of startups securing funding up by 16.8 per cent compared to the previous year, according to data compiled by Disrupt Africa (Disrupt Africa 2017).

Together with its partners, the World Bank is building on these opportunities towards a more inclusive Africa, using multiple entry points through analytics, operations and policy. Informed by analytical work on forced displacement in the Horn of Africa, for example, a regional project covering Ethiopia, Uganda, Djibouti and Kenya is responding to the needs of host communities regarding services, livelihoods and environmental sustainability. In support of women’s opportunities, a new project in Nigeria will focus on women’s economic empowerment, while interventions in the Great Lakes region and Uganda are focusing on the prevention and response to gender-based violence (GBV). The Africa Gender Innovation Lab is conducting impact evaluations looking at gender dynamics and gendered impacts of a broad range of projects to inform future interventions. With support from the Transitional Demobilization and Reintegration Program (TDRP), operations in DRC, the Central African Republic, Rwanda and Mali have supported the demobilization and reintegration of ex-combatants, providing them with training and livelihoods opportunities. In a demobilization project in Burundi, special emphasis was placed on addressing ex-combatants with disabilities, to name just one example for disability-inclusive development. In Mali, a skills development and youth employment project is helping youth acquire the right skills to compete for jobs. Throughout these and other interventions, emphasis is placed on community-driven and participative processes to ensure voice and citizen engagement as key channels for inclusion.

[1] According to the World Bank’s Harmonized List of Fragile Situations for fiscal year 2018.

[2] Internal calculations by the Transitional Demobilization and Reintegration Program (TDRP).

[3] This is an estimate of disability prevalence among working age individuals (aged 18 to 65) in 7 African countries for which comparable data from the World Health Survey (WHS) is available: Burkina Faso, Ghana, Kenya, Malawi, Mauritius, Zambia and Zimbabwe.