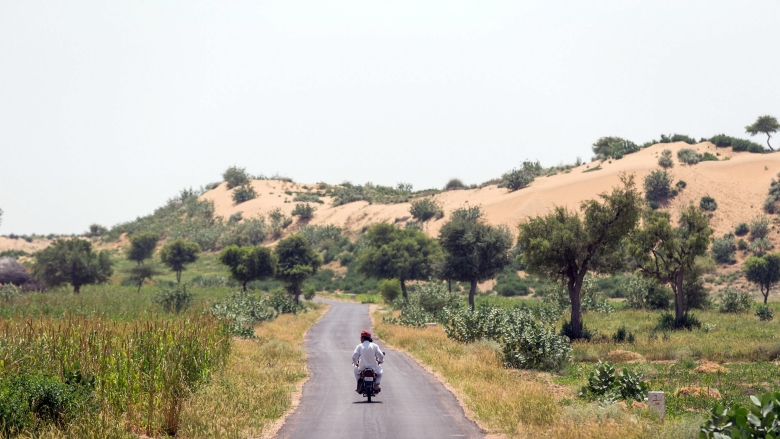 Village elders ride a motorbike along the new road near Boongari Village, District Jodphur, Rajasthan, constructed by the Pradhan Mantri Gram Sadak Yojana program (PMGSY). PMGSY is a nationwide plan in India to provide good all-weather road connectivity to unconnected villages. It is fully funded by the central government and implemented in conjunction with the World Bank

We spoke to World Bank Lead Transport Specialist Arnab Bandyopadhyay about India’s commitment to road safety and how the World Bank is supporting this effort.

The Indian government has just introduced the Motor Vehicles (Amendment) Act, emphasizing its commitment towards road safety. How important is this issue for India?

While India has less than 3 percent of the world’s vehicles, it accounts for about 12 percent of the world’s road deaths. In 2018 alone, World Health Organization (WHO) estimates that almost 300,000 people died due to road accidents in the country. This number remains disproportionately high compared to countries with much higher levels of motorization, such as the United Kingdom, Australia, and Netherlands.

The human cost in this is enormous, and so is the impact on the economy. A World Bank study has found that if India were to successfully halve road deaths and injuries between 2014 and 2038, it could potentially add 14 percent to its GDP per capita.

Unfortunately, the impact of vehicle accidents on the underprivileged is often disproportionate. Pedestrians, cyclists and motorcyclists, usually hailing from low-and middle-income strata, account for more than 50 percent of the road traffic deaths in India.

Road accidents can affect people’s livelihood and push them into poverty. Studies show that poor households go into debt by borrowing money to cope with the additional medical expenses, in addition to losing income after an accident.

What, according to you, are the main areas India should focus on to achieve the Sustainable Development Goal that aims to halve the number of road accident deaths by 2020?

Establishing a clear national goal and pursuing it in mission mode through an appropriately resourced lead agency is something India should focus on as a priority. The new Motor Vehicle Act, in fact, makes a provision for exactly such an agency—the National Road Safety Board. States are being encouraged to create independent lead agencies as well.

For a lead agency to be most effective, however, it must be fully independent, accountable and adequately equipped with specialists from all aspects of road safety management.

Without adequate funding, institutional structures and processes can remain ineffective. In Argentina, for example, the lead agency received 1 percent of all collected vehicle insurance fees as core funding. Similar funds have been established in New Zealand, Australia, Sweden, Finland and Great Britain, for example.

Currently, India does not have a dedicated road safety fund at the central level. However, several states such as Kerala, Bihar, Haryana, Himachal Pradesh, Maharashtra, Odisha, Punjab, West Bengal, Nagaland, Manipur, Jharkhand, Uttarakhand, Rajasthan and Tamil Nadu have set up such funds. These funds receive part of the money collected from traffic fines and the registration of motor vehicles. The money is then used to make the roads safer by improving infrastructure on national highways, patrolling the roads and highways, carrying out research into road safety, upgrading post-accident care, and raising awareness about road safety.

Further, establishing and maintaining a data management system that monitors and analyzes road accidents will help identify accident hot spots and enable the authorities to pin point what needs to be done to make these patches safer. Although road safety data in India is collected by the police departments of all states, this information needs to be analyzed, with targets and policies set accordingly.

So far, India does not have a national level database for road accidents, although the World Bank is supporting the development of one. Tamil Nadu and Himachal Pradesh have already developed their own crash data management systems, with support from the World Bank, while a few other states are in the process of doing so. From 2017 onward, all states and union territories have adopted a uniform traffic accident recording format developed by the Ministry of Road Transport and Highways (MoRTH).

The above exercises will help governments at the center and the states develop a more targeted road safety program that brings together law enforcement, vehicle safety, drivers’ licenses and training issues, as well as post-accident care on the part of the authorities. It also includes raising awareness and improving compliance on the part of the public.

How committed is the World Bank to road safety in the Indian context? How have projects helped?

World Bank support for road safety is spread across 12 national and state highway projects amounting to about $200 million.