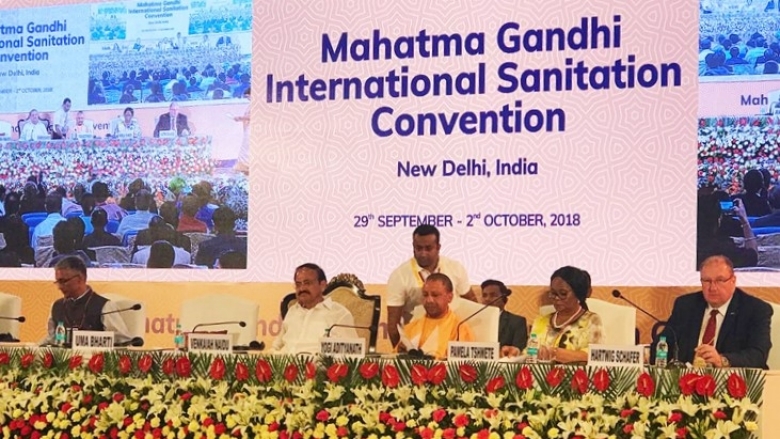 It is a great pleasure to be in Delhi to speak at this important event, on this critical subject.

I want to start by recognizing the vision and leadership of Prime Minister Modi. He launched the world’s largest-ever sanitation movement and made it a people’s movement.

Swachh Barat big not just for India, but big for the world, and for the achievement of Sustainable Development Goal 6 that calls for clean water and sanitation for all.

India turning Open Defecation Free, or ODF, would mean halving the world’s population that practices open defecation. The World Bank is proud to support this goal, through the largest ever loan for rural sanitation to any country, in the amount of 1.5 billion dollars.

Today I want to talk about three things: firstly, why the Swacch Bharat Mission is a gamechanger for India; secondly, why it has more potential for success in the long run than earlier efforts, and thirdly, the opportunity this represents for India and the world.

On my first point: the Swacch Bharat Mission is a gamechanger for India because sanitation is critical to health and human capital, which in turn, is critical for economic growth.

Open defecation and poor sanitation make people sick. For adults, it means less income when they cannot work and more expenses for doctors and medicine.

By making children sick, it limits their ability to absorb nutrients – no matter how much food they receive. As a result, a poorly nourished child does not grow up to be a healthy, productive citizen.

There are other hidden impacts. Girls that feel unsafe because they have no privacy for their sanitation needs are more likely to drop out and less likely to get a good job later in life.

Improving sanitation is about investing in people, transforming lives. Healthier children will become healthier adults who contribute more to the economy.

This principle is at the core of the World Bank’s new Human Capital Project, spearheaded by World Bank President Dr. Jim Yong Kim. It will be formally launched at our Annual Meetings in Bali next week. It will include a new Human Capital Index to measure relative achievements of countries in investing in human capital. It will help capture India’s focus on improving sanitation as a critical contribution to push India’s human capital development to the frontier.

The World Health Organization reports that the economic return on sanitation spending is $5.5 for every $1 invested.  This represents amongst one of the largest development dividends of any single intervention.

This is why good sanitation is good economics.  It is a gamechanger for India’s human and economic development as it strives to become an upper middle-income country and provide prosperity and opportunity to all its people.

Why success is more likely:

To my second point: why the Swacch Bharat Mission has more potential for success in the long run than earlier efforts.

Many of you here know the story. Previous attempts at solving India’s sanitation challenge focused on building toilets with the assumptions that people with access to a toilet would automatically want to use it. This did not work. Some were used as a toilet, but some were diverted to other uses, grain storage, chicken cages, and a host of others were simply not used at all.

It is different because there is a vision from the top, combined with the determination to make it happen.

On September 19, India’s Union Finance Minister reminded us in an article that the Government of India has invested over $20 billion to date for this mission. Very few countries exhibit such clear commitment. I congratulate Prime Minister Modi for taking Mahatma Gandhi’s teaching into action and making sanitation such a priority.

The Swacch Bharat Mission has created a mass-movement by institutions and by the people.

It is a mass movement by institutions as every Union Ministry is mobilized and committed to deliver its share of the Swacch Bharat Mission, and this is true at all levels of governments at State, district, block and all the way to the village level.

It is also a mass movement by the people, as it is focused on behavior change and entrusting every household and community to engage in becoming open defecation free and sustaining that achievement to make their village a healthier place to live.

The Swacch Bharat Mission marks a laudable shift in focus from toilet construction to toilet usage and sanitation improvement at the scale of the communities.  In doing so, it also puts a big emphasis on engaging in a conversation with people about changing behavior and understanding how to create ownership to sustain this change.

It is this focus on results, which has influenced the World Bank support by working with the Ministry to design a fiscal transfer mechanism which recognizes not only the achievement of latrine construction goals but more importantly, their effective and sustained use.

Back to behavior change: Changing centuries-old habits of defecating in the open is a complex and long-term undertaking. It is rightly called a “journey” towards a Clean India. Such an endeavor takes time. Bangladesh took 15 years and Thailand 40 years to achieve ODF status. Yet, experience show that when people are convinced that it is their own interest to change their behavior, things can go fast. It becomes their project to build a toilet, their mission to be open defecation free, and to remain ODF.

I’ve seen firsthand what all this work is achieving in rural India.

I’ve just had an amazing experience in Bhagai Village in western Uttar Pradesh, I went there to see what a concerted drive by villagers themselves to become ODF looks like. They declared ODF about one and a half years ago and have been in ODF status since.

In the United States, there’s a saying: “It takes a village.” It means that great change always comes when communities get together, individuals alone can’t make much of a difference. What I saw in Baghai was a confirmation of this saying. I saw a community coming together to make a great difference to everyone in the village.

The village is clean, it’s bright, kids are in school, and the villagers are healthy. It was a privilege for me to see what difference sanitation can make.

What struck me was the personal commitment of the local administration, volunteers and village representatives to make Bhagai ODF. People built toilets because they were convinced it was their interest to do so. No one else came and built it for them. It was inspiring to witness the enthusiasm of ordinary people to take control and make a measurable difference in their lives and in their community.

Does it mean that it happens as it should everywhere? Probably not. Ring-fencing, course correction and rigorous monitoring and verification are required.

Does it mean that the achievements of today are guaranteed to remain five years from now? They can be, if the risks are addressed. These are complex interventions into human behavior and there is always the risk of reverting to old practices. Or the risk of giving up on the toilet once the pit fills up and it’s not properly emptied. But with the right focus on building systems and markets and inculcating deep behavior change, governments can ensure that the developmental achievements, including those under Swachh Bharat Mission, are sustained in the long run.

Places like Bhagai are powerful examples of a real people’s movement, where genuine behavior-change guards against relapse and allowed the community to ripen the benefits of improved sanitation.

My third and final point is about the opportunity that the Swacch Bharat Mission represents for India.

Strengthening the sanitation value-chain is critical for sustainability, as toilets need to be maintained and their by-products need to be adequately managed.  Better still, this value chain creates jobs.  Toilet building will provide economic opportunities to local masons, material suppliers and manufacturers.

Our global experience has shown that an emerging sanitation eco-system emerges from improved sanitation, which represent opportunities to develop the local economy. It goes from plumbers, masons, sanitation engineers, all the way to skilled people to manage modern equipment to clean septic tanks, and proper treatment facilities.

We have seen this across the world. In Senegal, the management of fecal sludge led to the development of a new set of entrepreneurs to de-sludge and manage the septage from septic tanks. Closer to us, in Sri Lanka, the National Water Supply and Drainage Board is testing a new model of Public-Private Partnership for toilet improvement and septage management in four municipalities outside of the capital city Colombo.

There is an opportunity for India to help turn the vision of an ODF world into a reality.  This is achievable with full commitment and adequate resources. There are many countries that could learn from India.

The Swachh Bharat mission is an example of the comprehensive and inclusive sanitation approaches that are promoted by the World Bank and other partners - a diversity of technical solutions is embraced to promote tailored approaches, to ensure that no-one is left behind.  There is an opportunity to use this conference we’re attending right now to build and strengthen partnerships and exchanges that can accelerate progress towards an ODF world.

The World Bank is proud to be a partner in this and we are happy to facilitate collaborations that will help improve sanitation outcomes for millions across the world. In fact, the World Bank established in India an initiative called “Lighthouse India” to promote exchanges of “knowledge in implementation” and share India’s development experience with other countries.

The Swacch Bharat mission is inspired by Mahatma Gandhi’s vision. He would certainly be pleased to see that India is quickly and surely heading down the path towards improved sanitation.

I would like to end with a call to action for everyone in the room. Let’s make sanitation a priority at the global level. Let’s create a global movement to stop open defecation. We as the World Bank would be more than happy to support your country make this essential change for human dignity and a thriving economy.