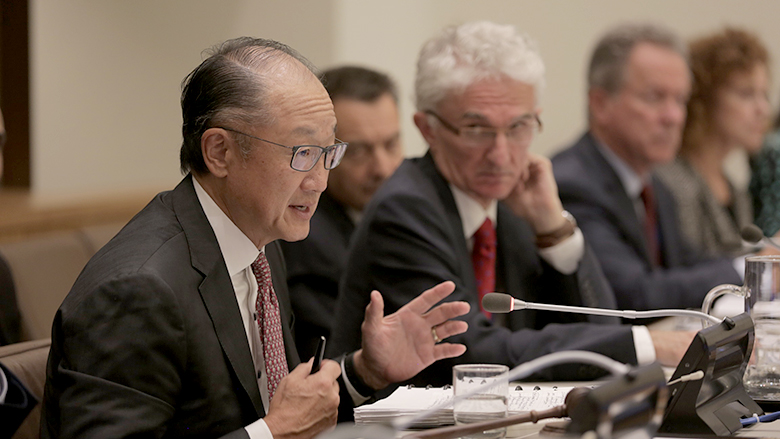 Thank you Zeinab. And also thank you for those kind words Secretary General António Guterres, my friend António. But all of that started in a room very much like this here at the United Nations, now I think five and a half years ago, when I heard António speak for the first time. It was about the Syrian refugee crisis. His words were so clear, so powerful, so searing, that it struck me the World Bank could no longer sit on the sidelines in crises around refugees. And that was really the beginning of the very close working relationship. We started there and have expanded to pandemics, and now here with famine.  António, I just want to thank you for tremendous leadership and really for bringing us in to work much more closely with you.

Our zero-tolerance commitment is very real. We are pledging to do more and better to get ahead of famines.

This is a fundamental moral issue. The fact that tens of millions of people are at risk of starving to death is a tragedy. And in the 21st century, the fact that we haven’t ended famine is a collective failure of shameful proportions.

It’s also a critical economic issue. From a human capital standpoint, famines raise child mortality, increase stunting, and impair cognitive development for children in utero at the time of the famine and of the children who survive.

Child mortality increases by roughly 60 percent; the average height for children under five falls by two centimeters; and time in school drops by roughly half a year. We know that when children are stunted, their brains don’t develop properly. It’s very likely that they won’t ever catch up; they may in fact be hardwired to fail.

That will reduce productivity and lifetime earnings. In rough terms, a child born during a famine might have his or her lifetime income reduced by 13 percent or more.

There is also strong evidence that famines cast a long shadow. Children of mothers born during famines are themselves more likely to have worse outcomes, creating a vicious cycle where economic losses span across generations.

Millions of households, 124 million people suffering from high or higher than usual malnutrition exist in the world. And the only way they can meet their basic food needs is by depleting their assets, which leaves them even more exposed to future shocks.

When we talk about these tragedies, it’s easy to get lost in the numbers: 100,000 dead in one country; a million in another. Each of those numbers is a person, with dreams and hopes, and deserving of a chance for a full life, and for the lucky ones who survive, famine can also destroy hope. We have it within our power to change that.

There are challenges ahead of us and the commitment we are making is to find new and innovative way to address them.

First, early warning must translate into early action. But again, and again, alarm bells have been rung to deaf ears. Funds begin to flow only when pictures of starving children appear on television or on smart phones.

This is completely unacceptable. Investing in more proactive responses to avert humanitarian crises could save millions of lives, and it can also reduce the costs to the international community by as much as 30 percent.

Second, we need sustained collective action—before, during, and after crises. Humanitarian actors play a vital role in responding when famines strike, but they cannot do it alone. The development community must complement the talent, financing, and dedication of humanitarian workers, and indeed help safeguard all of the advances that have been made so that they can continue to push the frontiers of their efforts.

Third, we have to ensure that national and international organizations work more closely together to develop more comprehensive approaches to famine prevention, preparedness, and early action. Our collective response last year was much better than compared to the 2010-2011 famine in Somalia that killed a quarter of a million people, but the system has widely remained the same—with funding and action often coming too late.

We need to move away from ad hoc decision-making toward strategic, coordinated planning across the humanitarian and development communities, and with governments wherever possible.

Today, we’re taking a historic step to address these challenges and deliver on our commitment to end the vicious cycle of panic and neglect when it comes to famine.

Over the last year, we at the World Bank Group– in full partnership with the United Nations, international donors, ICRC, NGOs, academics, philanthropists, and the private sector – have been working to develop the FAM – the first global mechanism dedicated specifically to prevent famine and support preparedness and response.

What will the FAM do?

First, the FAM will enhance the predictive power of our early warning systems, helping ensure timely responses to emerging famine risks. We are building on the great work led by UN partners, the European Commission, IPC, FAO, WFP, and the Famine Early Warning Systems Network to test new and advanced approaches to model famine risk.

For the first time, we have assembled a global coalition of technology firms – including Amazon, Google, Microsoft, and tech startups – to explore the use of disruptive technologies such as artificial intelligence and machine learning to estimate famine risk more accurately, quickly, and cost-effectively.

Technology partners will help gather and analyze more comprehensive data, which is critical for helping decision-makers respond earlier to get ahead of risks before they escalate into famines.

The FAM also seeks to make financing predictable and strategic. The mechanism will emphasize scaling up investments to tackle root causes that leave populations at risk of famine year after year.

Additionally, the FAM will strengthen the link between famine early warnings and funding to support consistent early action when the risk of famine begins to escalate.

Globally, IDA, the World Bank’s fund for the poorest countries, provides an average of 1 billion dollars each year for operations to improve food security and resilience to famine. Half of these operations include measures to respond to emerging or ongoing food crises. Through the FAM, we can better allocate these resources at an earlier stage and ensure that financing for response and resilience to food insecurity is a bigger part of our work.

We are also exploring innovative financing such as potential risk-sharing solutions with the capital markets, and we’re identifying ways to harmonize these various resources into comprehensive and strategic funding plans across the international system.

Finally, the FAM will work with key partners and build on the ongoing efforts taking place at the country and global levels to help ensure that resources are channeled to the most effective and well-coordinated interventions. Instead of creating parallel structures, we will work with existing systems as much as possible to make the best use of our limited resources, such as building social safety nets.

Let me just add one note – we have already demonstrated how well these kinds of actions can work with the pandemic emergency financing facility. The key, and Henriette sitting right here, the key is that we pre-arranged that financing would move to UNICEF, WHO and to all the organizations that normally respond to pandemics, and that the money will move sooner. In the Democratic Republic of Congo, rather than waiting eight months for any financing to flow we had about a million dollars per patient with Ebola released within the first month. And that put out that particular epidemic. Unfortunately, another one started in another part of the DRC, but we know that if we have these conversations ahead of time, we can actually stop these from moving forward.

We’re inspired by this effort. We are inspired by the fact that the Secretary-General is going to watch over this himself. We think that if we do this right we can make famine history.