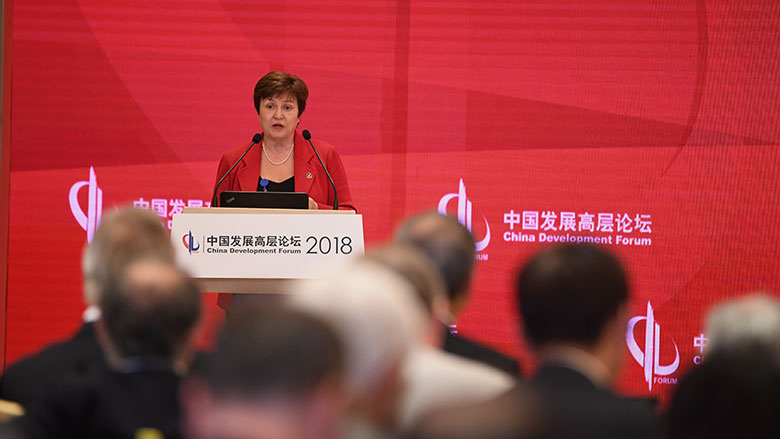 Speech at the China Development Forum

I would like to thank our host and partners from the Development Research Center of the State Council for inviting me, and for our decades of close partnership and friendship. And I congratulate Governor Yi Gang on his appointment as Governor of the People’s Bank of China.

This year, we celebrate that 40 years ago Deng Xiao Ping initiated reforms with his famous speech “Seeking Truth from Facts, Emancipate the Mind and Unite as One to Face the Future.”

In those early days of reforms, the World Bank’s first loan to China was to rehabilitate universities— seen from the perspective today it is clear that this was a wise investment in the long-term development of the country that helped to build the minds of the future and led to the remarkable transformation of China.

From one of the poorest countries in the world in 1978, China is now a high middle-income country that, in all likelihood, will become a high-income country in the next decade.

In the process of reforms, China has lifted more than 800 million people out of poverty. China’s success has and continues to benefit the global economy and particularly other developing countries, including through learning from China’s experience.

Financial sector reforms and development have been an integral part of China’s progress since the early days of reform. China’s financial sector today is unrecognizable from the socialist mono-banking system that prevailed before 1978.

Today, China’s financial sector is much closer to what is needed for a market economy. It is far more diversified, more integrated with the rest of the world, better supervised and has the capability to intermediate China’s abundant savings.

Challenges remain though. Today, I would like to highlight three key challenges: The first key challenge is to maintain stability of the financial sector.

From our international experience we know that maintaining financial stability is a key ingredient to becoming a high-income economy. Since the Global Financial Crisis, China’s financial sector has supported the government’s economic stimulus—with good results for growth and employment, but with risks building in the system—risks that are well recognized by the authorities.

The rapid expansion of credit in the aftermath of the financial crisis has increased the level of debt to GDP from less than 150 percent a decade ago to more than 250 percent of GDP now. Although this size is comparable to OECD countries, its rapid growth in the past decade raises concerns.

Within the banking system, the large, nationally-owned banks have seen their share in credit reduced from well over 60 percent to less than 40 percent, whereas smaller, locally-owned banks with less capacity and more influenced by local governments have gained market share. Further, China’s shadow banking has seen rapid development. Though not yet large by OECD standards, the rapid development, light regulation and interlinkages with the formal banking system add to risks.

It is encouraging that the government has made controlling risk in the financial sector its highest priority. President Xi re-emphasized this again in his speech to the 19th Party Congress, and the government report to the recently concluded National People’s Congress reaffirms this priority.

Managing these risks is of the utmost importance—especially in light of the fact that the normalization of monetary policies in major economies could cause volatility on international financial markets and because the threat of protectionism may cut short the global upturn. And it is important not just for China, but for the world economy. Due to its size, China is considered a systemically important country, and as such the World Bank and IMF regularly review the health of the financial sector.

The authorities have recognized that a slower medium-term credit growth is required to put the economy on a more sustainable path, and monetary policy has been adjusting gradually towards that goal.

And government has started to address the high leverage in the corporate sector, by accelerating restructuring of enterprises in excess capacity industries such as steel, aluminum and coal.

The recent establishment of the China Financial Stability and Development Committee will help in managing risks, as it will allow for better, more integrated supervision of an ever more complex financial sector, and better coordination among the supervisors.

Finally, filling regulatory gaps and further enhancing the crisis management framework would also help in reducing risks in the financial sector in the short term.

This is a good time to address China’s financial risks: China’s economy is growing beyond expectations, jobs growth is at record highs, and the world economy is recovering rapidly.

The second key challenge is how to reform China’s financial sector it in such a way that it supports China’s new development objectives.

As the 19th Party Congress demonstrates, these objectives are ambitious: for the next phase of its development: China is seeking quality growth, productivity- and innovation-driven growth, inclusive growth, and greener growth.

To achieve productivity-based growth, credit must flow to the most productive companies. Our forthcoming report with the Development Research Center on New Drivers of Growth shows that since the global financial crisis, the relationship between credit and productivity has weakened, and turning this around is key for China's future growth.

China has understood that to get to productivity-driven growth, the market should play a decisive role in resource allocation. Nowhere is this more important than in the financial sector —so commercial financial institutions would need to be able to make decisions on commercial terms.

Well-regulated and developed capital markets could support large-scale long-term financing and provide essential investable assets for long-term savings in the context of an ageing population.

A more balanced financial sector structure would also help to unburden the banking system with risks better handled by capital markets. It is in this area in particular where China’s recent decision to open up the financial sector for foreign financial institutions can pay off.

China has made great progress in financial inclusion, with access to financial services among the highest in the developing world. And where gaps still remain, for example with access to finance for SMEs, we have been working closely with China. The rapid development of Fintech, in which China is a global leader, has added to more inclusive finance.

Take the example of Alibaba, which is doing incredible things with digital finance. They have a system, they call 3/1/0. They can look at someone’s online activities and determine their creditworthiness in 3 seconds, and lend an amount up to 1 million Renminbi. It takes 1 second to transfer the money with zero human hands touching the process. What if we can make this accessible to the world’s poorest people? This could be truly transformative! We are working with the People’s Bank to learn from China’s experience in financial inclusion, and share this with other developing economies

Finally, green finance will play an increasingly large role in China as it builds what it calls its “ecological civilization.” China has been a leader in this area, domestically, and in the context of its presidency of the G-20 in 2016.

Already, China is the largest issuer of green bonds in the world. Developing high standard for green finance, and developing the vehicles that can deliver on those high standards at scale will be the next phase. Indeed, China’s success in building its green finance system is of global importance.

A final key challenges for China’s financial sector is how to manage its internationalization.

In recent years, China has been assuming a larger role in the international arena commensurate with its economic weight.

While China has wisely chosen a gradual path to capital account opening, financial flows from China are already playing an increasingly large role around the world.

These financial flows are huge opportunities for development in receiving countries, as past investments have demonstrated.

We firmly believe that the benefits can be maximized if those financial flows abide by the high standards that Chinese financial institutions exercise at home, and that have become the norm among the international community.

Social and environmental feature among these standards, but increasingly China will also need to take account of the debt sustainability of receiving countries. The World Bank and IMF are currently developing a new debt sustainability framework that will take effect on July 1st. And on this, we would be happy to work with China.

Mr. Chairman, in closing, let me say that the World Bank Group has been deeply engaged with China in the past forty years in financial sector development and, more broadly, China’s reform program. We are committed to continue our long-term engagement with China in its next phase of development, and to work with you on international development challenges and in our client countries around the World.