Ring the Bell for Gender Equality

Congratulations to all of you on the occasion of International Women’s Day and thank you to Bursa de Valori Bucharest for the invitation to address you.

I say congratulations to all of you, because in celebrating this day, and in celebrating women in the workplace, in society, we are in fact celebrating the noble goals of a more inclusive society and the aspirations of fair and equal opportunities for all citizens, regardless of their gender. 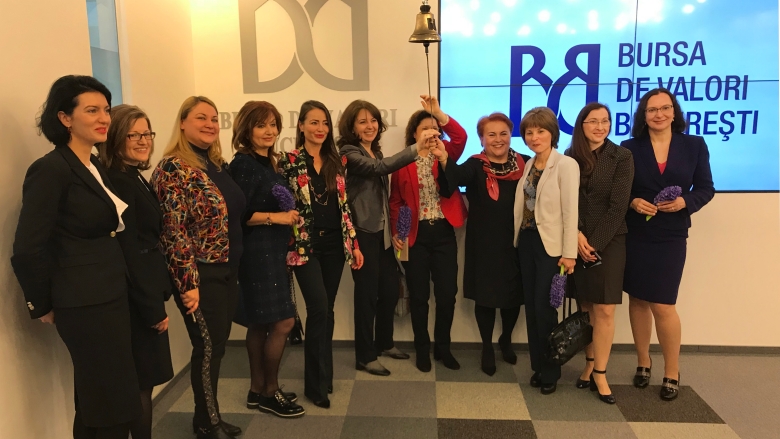 Our World Development Report 2012 – Gender Equality and Development – is unequivocal in highlighting that gender equality is smart economics and can result in higher GDP growth, but it is also the right thing to do. Women deserve the same access to public services, voice and employment opportunities.

Gender equality and the successful inclusion of women in all walks of life translates into greater economic productivity, better outcomes for the next generation and more representative decision-making and policy choices.

Let me briefly touch on Romania’s situation and let me start with the good news. A high growing Romania will require more employees with a background in science, technology, engineering and maths. Romanian women are already leading the way and outperform their EU peers in these fields by 8 percent.

But Romania continues to have a large gender employment gap. In 2016 this gap was 16.4% compared to a 10.5% average for EU28. This trend has been on the rise in recent years. The difference in employment between men and women is particularly high in rural areas, where it stands at 22 percent. Young women who live in rural areas are more vulnerable to unemployment and poverty, especially those with lower levels of skills and education.

Almost half of rural women in Romania have not completed upper secondary education and 43 percent are in the poorest quintile. Bringing them out of poverty will require actions that integrate equal and better access to education, supported by stronger employment policies and a greater role for the private sector.

Women in Romania are also disproportionately affected by the challenges facing the health system, particularly in terms of quality of screening and access to services. Romania has the highest rates of mortality for cervical cancer, around 4 times higher than the EU average, and cervical cancer is the leading cause of death by cancer for women aged 25-44.

The situation of Roma women is particularly vulnerable. Unemployment rates for working age women stand at 43% vs. 28% for men, reflecting a waste of valuable resources to the Romanian economy.

What these numbers illustrate is that it is very hard to paint a uniform picture of Romania, both in terms of its development story but also in terms of the quality and access to public services. We need to continue collectively to advance the vision of a more inclusive Romania. Education and health, alongside the right employment policies, can be the great equalizers in helping every woman fully realize its potential.