Skip to Main Navigation
This page in:_
PRESS RELEASE August 26, 2020 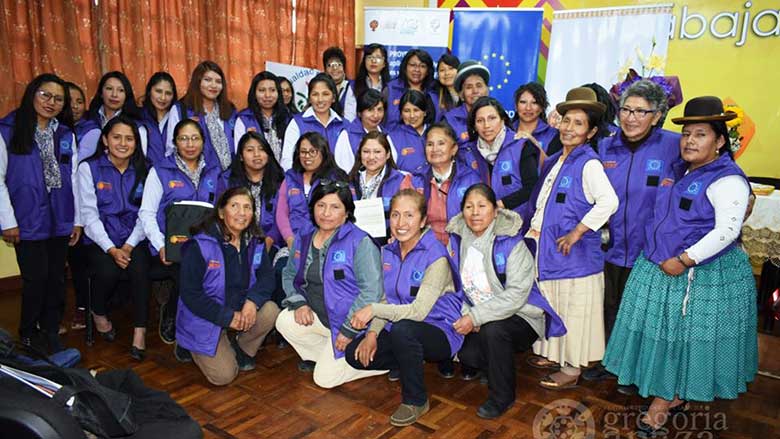 Community agents at the end of their training in 2019 (El Alto).

The 2020 Development Marketplace: Innovations to Address Gender-Based Violence award, is an annual, global competition for researchers jointly created by the World Bank and SVRI to find innovative solutions that can help individuals, communities, and nations prevent and respond to gender-based violence. This year 250 projects participated globally.

The winning initiative seeks to contribute to the prevention of and attention to violence against women in Bolivia through the adaptation and implementation of an intervention model based on community agents, who are women that suffered gender-based violence and were subsequently trained to guide, remit, refer and follow up on cases of women in a violence situation, promoting their access to justice services. This model is currently implemented in El Alto by the Gregoria Apaza Center.

In addition, the project will incorporate women with some type of disability, migrants, indigenous people, and girls and teenagers. The idea is to multiply the impact and sustainability of the model so that it is then replicated nationwide and implemented as part of public policy in this area.

"The impacts of gender-based violence go far beyond the immediate significant harm to victims and manifest in health impacts, absenteeism and loss of productivity in the workplace, loss of income for families, and effects on the next generation.  The costs to society are steep and persistent," said Caren Grown, Global Director, Gender, World Bank Group. “Through the Development Marketplace awards, researchers around the world are helping accelerate efforts to prevent and address gender-based violence.”

“Research and uptake of research findings is essential for understanding the drivers of violence and the contexts within which they flourish to help identify ways in which we can bring about sustained social change to end violence against women and children.” said Elizabeth Dartnall, Executive Director, Sexual Violence Research Initiative.

In the last four years, $5 million has been awarded by the World Bank Group and SVRI to 50 research projects in more than 32 low- and middle-income economies. The Development Marketplace award is given in memory of all victims of GBV, including Hannah Graham, daughter of a longtime World Bank Group employee. This year, Development Marketplace awards will support researchers in Bolivia, Brazil, Cambodia, India, Jordan, Serbia, South Africa, Vietnam, and a team conducting global research.

The World Health Organization estimates that 1 in 3 women worldwide have experienced partner or non-partner sexual violence in their lifetimes. Researchers have found that gender norms are often at the root of gender-based violence and that shifting community attitudes are critical to helping prevent violence against women and girls. During the COVID-19 global pandemic, evidence has emerged that violence against women and girls, and in particular domestic violence, has intensified around the world due to confinement and lack of access to services.

Bolivia has made important progress in narrowing gender gaps and addressing gender-based violence. There are substantial improvements in women’s access to education, health, land ownership, and public office through several laws and regulations, as well as organizational restructuring. The implementation of parity and alternation in the political system, for example, has direct repercussions in the participation of women in decision-making at the national and local levels. There is also an interesting development in the legal framework to hold the state accountable for safeguarding the rights of girls and women. Despite all these actions, significant challenges remain.