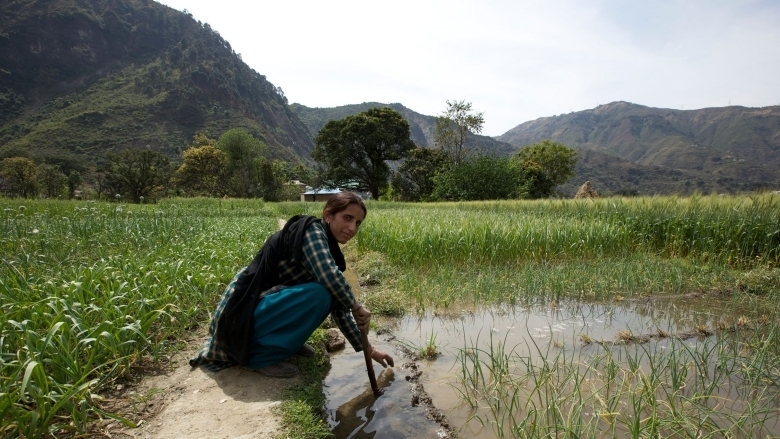 A farmer irrigating her fields in Himachal Pradesh, India

The Integrated Project for Source Sustainability and Climate Resilient Rain-Fed Agriculture in Himachal Pradesh will be implemented in 428 Gram Panchayats in 10 districts [1] benefiting over 400,000 smallholder farmers, including women, and pastoral communities.

“As we encourage climate-smart agricultural practices in India, farmers will need both technical and financial support to adapt agricultural practices relevant to their geography and climate.  As a mountainous state, Himachal Pradesh is particularly vulnerable to climate change and associated risks,” said Sameer Kumar Khare, Additional Secretary, Department of Economic Affairs, Ministry of Finance, Government of India. “Sustainable water management practices under this project can play a big role in doubling farmers’ incomes, a goal set by the Government of India.  It is, therefore, critical that the best use is made of all available technologies and resources to increase water-use efficiency,” he added.

“Climate change is a global issue. But, addressing its impact requires building resilience at the local level,” said Junaid Ahmad, World Bank Country Director in India “Not surprisingly, Himachal Pradesh’s history of devolving greater responsibility to Gram Panchayats (GPs) offers the state a great advantage. Through GPs, Himachal Pradesh supports farmers and pastoral communities in securing their livelihoods in the face of climate variability and challenging agro-ecological conditions,” he added

In Himachal Pradesh (HP), many of the lowland areas lack access to irrigation water, and farmers depend on decreasing amounts of rainfall during the critical monsoon season. Agricultural production and snowlines have already shifted to higher altitudes, impacting the production of fruits, including HP’s iconic apples. Climate change is also expected to increase average temperatures and decrease rainfall in the lowlands, while both temperatures and rainfall are expected to increase in the highlands, which could lead to more extreme flooding events.

The project will improve upstream water sources in forests, pastures, and grasslands and ensure sufficient water is available for sustainable agriculture both in Himachal Pradesh and in downstream states.

Enhancing the climate resilience of agriculture and its allied activities is a key component of the project for which efficient use of water is the focal point. The project will set up hydrological monitoring stations to monitor water quality and quantity. This investment will lay the foundation for future water budgeting that will help plan better land use and agricultural investments, including by informing the development of more evidence-based catchment area treatment (CAT) plans that facilitate greater source sustainability, carbon sequestration, and water quality.

The project’s investment in downstream areas will increase small farmers’ access to high efficiency irrigation and help farmers shift from low-value cereal production to climate-resilient crop varieties, including higher-value fruits and vegetables. The focus on increasing climate resilience and water productivity will help farmers maximize their financial returns on water use. The project will also build the capacity of the Himachal Pradesh Forest Department (HPFD) and gram panchayats to better manage water resources and will work in collaboration with other government programs, particularly those of the agriculture, horticulture, and animal husbandry departments.

“We hope that more farmers will be empowered to adopt climate-smart agricultural practices with the technical and financial support of this project and that the HPFD and GPs will be better able to jointly plan, implement, and monitor sustainable land and water resource management in the upper catchments of Himachal Pradesh,” said M. Mercedes Stickler, Agriculture Economist and the World Bank’s Task Team Leader for the project. “Ultimately, such an effort will help improve forest cover, increase water quality and quantity, reduce erosion, and enhance agricultural productivity, including that of women, youth, and pastoralists.”

Such efforts are also expected to generate carbon benefits for the state. The net greenhouse gas benefit per hectare for the project area is estimated to be 0.6 tCO2/ha/year.

The $80 million loan from the International Bank for Reconstruction and Development (IBRD) has a final maturity of 14.5 years, including a grace period of five years.