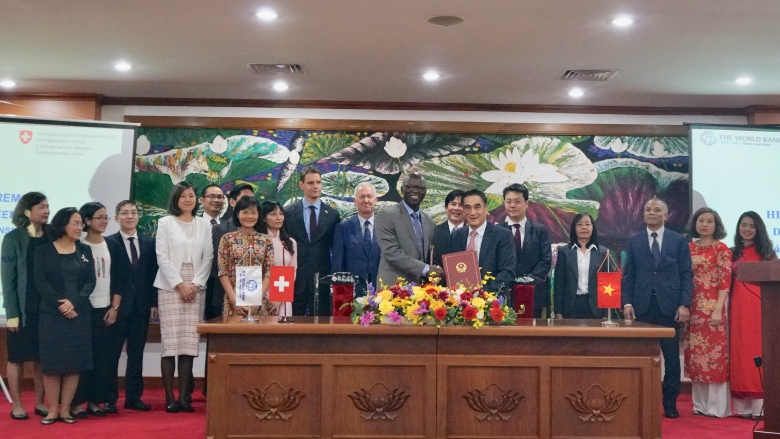 HANOI, January 15, 2020—The World Bank and the Ministry of Finance today signed a financing agreement for a grant worth US$10.5 million to promote integrated urban development and transport connectivity along a new Bus Rapid Transit corridor in Ho Chi Minh City.

The grant, provided by the Government of Switzerland through Swiss State Secretariat for Economic Affairs (SECO) and administered by the World Bank, comes as additional financing for the World Bank’s ongoing Ho Chi Minh City Green Transport Development Project that is developing a new Bus Rapid Transit corridor. This line, with 28 stations stretching along 23 kilometers, would provide reliable mobility service between the city center and its southeast and northwest peripheries.

“The scale-up activities made possible by the additional grant will enhance the development impacts of the new bus system,” said Ousmane Dione, the World Bank Country Director for Vietnam. “By promoting integration between transport and urban development and among various transport modes, the new bus system would improve accessibility and mobility for commuters which in turn would draw in more and more riders.”

“The project will demonstrate considerable economic, environmental and social benefits, and guide urban development towards more sustainable patterns in HCMC,” said Ivo Sieber, Ambassador - Designate of Switzerland to Vietnam. “The project thus can serve as a blueprint for replication in other cities in Vietnam with similar challenges.”

The grant will also help integrate the bus system with other transport modes, thanks to measures to maximize connectivity and ridership while also providing last-mile connections such as feeder bus services to carry people to and from the nearest bus station along the new line. The grant will also finance capacity building for transport officials and urban planners.

The ongoing project aims to improve the performance and efficiency of public transport along a high priority corridor in Ho Chi Minh City. The key economic benefits include reduction in travel times and vehicle operating costs and improvement of traffic safety. These benefits are estimated to total more than US$120 million over the life of the project. The activities funded under the grant are expected to bring additional benefits in terms of improved livability and sustainability.

This first bus rapid transit line developed in Ho Chi Minh City is financed by an US$124-million credit from the International Development Association of the World Bank, and a US$13.45 million-contribution from the Government of Vietnam.