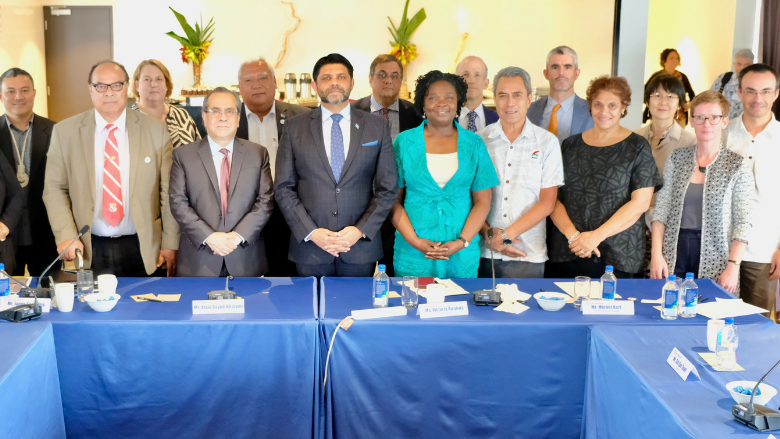 DENARAU, May 6, 2019 - Pacific Finance Ministers came together today in Denarau, Fiji, to respond to the World Bank’s call for increased investments in human capital -- the knowledge, skills, and health that people accumulate over their lives.

Ministers of Finance from several Pacific Island countries including Fiji joined the World Bank to discuss the challenges their countries face, including significant deficits in nutrition, hygiene, healthcare and education. In the Pacific region, deficiencies in these areas have led to stunting in one out of four children, and as high as one in two in Papua New Guinea. In terms of education, Pacific children are not staying in school long enough and are simply not learning enough. In PNG, for example, an average child will complete only eight years of school and only learn the equivalent of around five years’ worth by global standards.

“We recognize that the health, education and skills of our young represent the best hope for our region’s future prosperity,” said Fiji’s Minister of Economy, Hon. Aiyaz Sayed-Khaiyum at the Summit. “That is why we are committed to working with the World Bank and other partners to identify the best investments to secure growth and our people’s ability to thrive, earn and contribute in the future.”

Last October, the World Bank launched a global Human Capital Project – an accelerated effort to assess the progress countries have made in building human capital and help countries invest more – and more effectively – in their people.

“A country’s human capital is a critical driver of sustainable economic growth. It is key to ending extreme poverty and creating more inclusive societies,” said Victoria Kwakwa, Vice President East Asia Pacific of the World Bank during her opening remarks at the Summit. “Committing more and better investments for people in education, nutrition and health is fundamental for the future of their wellbeing and the prosperity of the Pacific economies” she added.

Key development partners - including UNICEF, the UN Development Program, the World Health Organization, the University of the South Pacific, Australia’s Department of Foreign Affairs and Trade, New Zealand’s Ministry of Foreign Affairs and Trade and the Japanese International Cooperation Agency - also shared their perspectives on human capital and expressed support for a focus on more and better investments in the Pacific’s people.

At the Summit’s conclusion participating Ministers of Finance committed to accelerating progress on human capital, with the World Bank similarly pledging to increase support for countries in these areas, in line with national development plans.

The World Bank currently supports several human capital related projects in the Pacific including early age reading in Kiribati, Tonga and Tuvalu; a training and skills program in Tonga; health and nutrition support across the region, and a new early childhood development program that was recently launched in Marshall Islands, with several partners, including UNICEF.