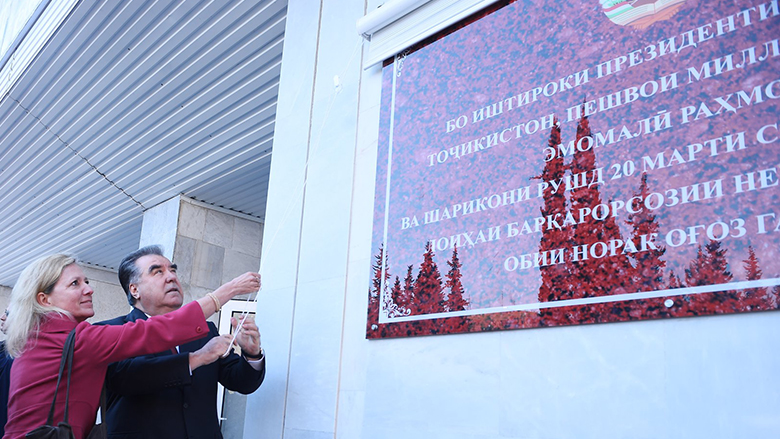 Photo: Press Office of the President of Tajikistan

DUSHANBE, March 20, 2019 – The first phase of the Nurek Rehabilitation Project, co-financed by the World Bank, was officially launched today by the President of the Republic of Tajikistan, Emomali Rahmon, and the World Bank’s Director of Strategy and Operations for Europe and Central Asia, Mariam Sherman. Key representatives from the Government of Tajikistan, the World Bank, the Asian Infrastructure Investment Bank, the Eurasian Development Bank, and other international development institutions also attended.

The rehabilitation of the Nurek Hydro Power Plant (HPP), which is the main asset of Tajikistan’s energy system, will help ensure a reliable supply of electricity to people and local enterprises in the cold season, and enable increased export of electricity in the summer months.

The Nurek HPP, with an installed capacity of over 3,000 megawatts, generates about 70 percent of total annual energy demand in Tajikistan. Operational at only 77 percent, the facility is currently undergoing its first major rehabilitation since its commissioning in 1972. Once completed, the rehabilitation will allow the Nurek HPP to increase winter generation by 33 million kWh—which is central to the Government’s efforts to ensure that energy demand can be met even during the coldest months. During the summer months, Tajikistan could expand electricity exports from its hydro resources, including through the CASA-1000 transmission line, and generate much-needed additional revenues for the power sector.

“The restoration of the generation capacity of the Nurek HPP is essential for ensuring energy security for the people of Tajikistan,” said Mariam Sherman, Director of Strategy and Operations at the World Bank. “Improved energy generation, combined with dam safety improvement measures, will help Tajikistan respond to climate change challenges, while ensuring expanded energy trade to generate much-needed revenue to support socio-economic development for the people of Tajikistan.”

The first phase of the Plant’s rehabilitation costs around $325 million. In addition to the World Bank’s financing of $226 million, funding is being provided by the Asian Infrastructure Investment Bank ($60 million) and the Eurasian Development Bank ($40 million).

During the first phase, three generating units will be rehabilitated, dam safety will be enhanced, with a special focus on protection against seismic hazards and floods, and six auto-transformers used to regulate voltage will be replaced. In addition, the institutional capacity of the Open Joint Stock Holding Company Barqi Tojik will be strengthened and its operational and financial performance will be enhanced. The rehabilitation of the power plant will be carried out by a specialized firm, Andritz Hydro, which the Government of Tajikistan has contracted through an open, international tender.

Development partners, led by the World Bank, are starting the preparation of the second phase of the Nurek Rehabilitation Project, estimated at $180 million, to commence in 2020.

Given Tajikistan’s long history of power outages, particularly during the cold winter months, Tajikistan’s energy sector has been a priority area of engagement for the World Bank. Its current investments in the sector stand at $415 million. These investments aim at supporting the sector’s sustainability, eliminating seasonal energy rationing, ensuring an affordable and stable electricity supply to families and businesses and much needed revenues from increased export of clean, non-fossil energy resources.

The World Bank’s active portfolio in Tajikistan includes 16 projects, with net commitments of US$625 million. The World Bank remains committed to supporting Tajikistan as it strives to improve the lives of its people and meet the aspirations of its young and growing population.