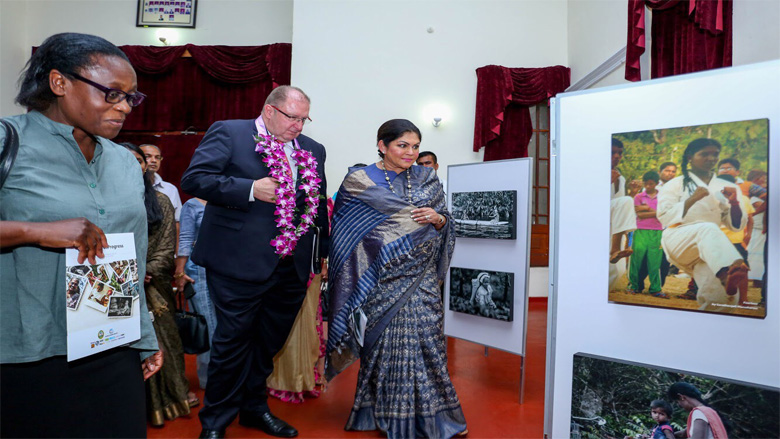 World Bank Vice President South Asia Hartwig Schafer (center), Mayor of Colombo Rosy Senanayake (right) and World Bank Country Director for Sri Lanka Idah Pswarayi-Riddihough (left) launching the exhibition and awards of the photography competition to press for progress to create the space for women to access and remain at work in Colombo

Colombo, February 15, 2019— The World Bank Vice President for South Asia Region, Hartwig Schafer concluded his three-day visit to Sri Lanka on Friday with a commitment to work with public and private sectors to create the space for women to access work and remain at work. . This comes at great cost to economic growth.

During the visit the Vice President met with the President of Sri Lanka, HE Maithripala Sirisena, Prime Minister, Hon. Ranil Wickramasinghe, Minister of Finance, Hon. Mangala Samaraweera, State Minister of Finance, Hon. Eran Wickremaratne, the Mayor of Colombo, HW Rosy Senanayake and the Governor of the Central Bank of Sri Lanka, Indrajith Coomaraswamy. He also interacted with community groups, project officials, private sector, development partners, civil society groups and completed a field visit to learn about a planned project to mitigate flood risk in Colombo. , placed in a longer term global context. On the last day, he participated in an exhibition and awards ceremony for female photographers at the Colombo Municipal Council.

“Getting more women into jobs is not only a development imperative, but there’s also a strong business case” said Schafer highlighting Sri Lanka’s achievements in human capital development and economic growth amidst challenges and risks. “Sri Lanka specifically could grow its economy by as much as 20 percent in the long-run by closing the gender gap in the workforce” emphasized Schafer quoting data from an IMF study.

Schafer concluded his visit with a meeting with His Excellency, the President of Sri Lanka. The VP reaffirmed the World Bank’s commitment to continue the over Six-decade long partnership with the country.

Earlier, . Schafer met with the project officials and communities to understand the current challenges due to changing weather patterns, flash floods and loss of life and livelihoods. Around 740,000 people are at risk of a 5 year flood with around $240 million flood related losses estimated. He observed the potential investments that could mitigate flood risk as well as improve the quality of drinking water and quality of life alongside the river.

During meetings with the Prime Minister, Minister of Finance and the Central Bank Governor, Schafer discussed the Government of Sri Lanka’s reform agenda. Schafer congratulated the Government’s achievements in reforms and moving up to the top 100 rank in the Doing Business index. Inland revenue act, the fuel pricing formula, national audit act and the active liability management act were among the noteworthy reform achievements. They also discussed the remaining challenges of stabilizing financial system, risk management and building fiscal resilience.

The State Minister of Finance and the Mayor of Colombo engaged in conversations around increasing women’s participation in the workforce on the sidelines of two events; the launch of the SLDU and an event to award women photographers, which was a part of a year-long partnership campaign to press for progress in reforms to increase women’s participation in the workforce. .

Background: IBRD and IDA portfolio commitments currently total US$ 1728.5 million (as of January 2019) with 14 operations under implementation. Currently, nearly 60 percent of commitments comprised lending in the sustainable development cluster (urban, climate resilience, agriculture, environment and water) and another 36 percent in human development (education, health and social protection). Sri Lanka graduated from IDA at the end of IDA17 and currently receives transitional financing from IDA18 (FY18-20) amounting to US$407 million.