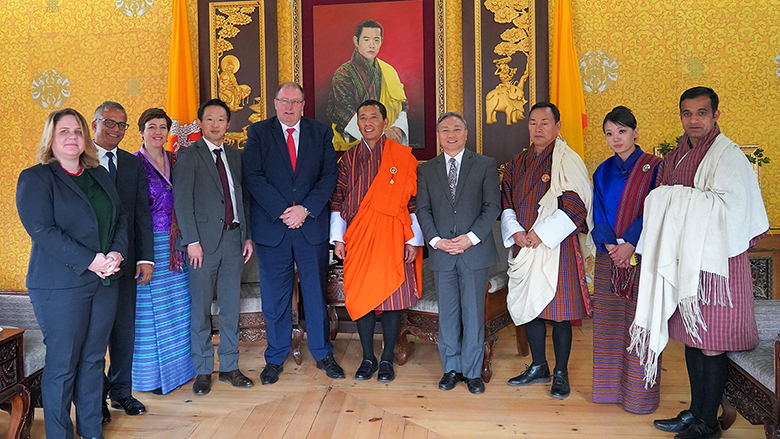 Hartwig Schafer and the Prime Minister of Bhutan

THIMPHU, January 25, 2019— World Bank Vice President for the South Asia Region, Hartwig Schafer today completed his first three-day visit to Bhutan. The main goal of the visit was to meet with the new government, learn about the country’s development priorities, discuss opportunities and challenges and how World Bank cooperation can help.

“While small, Bhutan sets an example for the world in its holistic view of development – represented by its unique philosophy of Gross National Happiness as well as remarkable environmental management,” said Mr. Schafer. “Bhutan is at present the only country in the world that absorbs more carbon than it emits, with more than 70 percent of its land covered by forests. With its vast rivers, it also has a huge potential for hydropower development and trade in energy.”

During the meetings with senior government officials, including the Prime Minister of Bhutan, Minister of Finance, and Minister of Foreign Affairs, Mr. Schafer encouraged continuous reforms to strengthen and diversify the economy, such as tax and public financial management reforms, measures to improve agricultural productivity, connectivity and business climate, as well as policies to encourage energy efficiency and address climate change.

The World Bank has started preparing its new partnership strategy with Bhutan for the next five years, which will fully align with the government’s 12th Five-Year Plan. “The World Bank stands ready to continue supporting Bhutan’s national priorities that are consistent with our goals of ending poverty and boosting shared prosperity,” said Schafer.

In his discussions with the Ministers of Health, and Labor and Human Resources, Mr. Schafer noted the country’s strong commitment to investing in people’s health and education through its “Narrowing the Gap” strategy. The World Bank recently launched the Human Capital Project, a global initiative to accelerate more and better investments in people for greater equity and economic growth. “We applaud Bhutan’s commitment to improving its citizens’ health and education, encourage the government to make further progress, and offer World Bank continuous support in this area,” saidHartwig Schafer.

The visit also included meetings with the private sector and development partners.

Background: Bhutan became a member of the World Bank in 1981 and has enjoyed a trusted partnership with the institution for the past 38 years. The country has implemented more than 26 IDA/IBRD operations (total of about 320 projects including TF and grants) with more than $350 million in World Bank support.