Recent developments: Growth in the Middle East and North Africa is estimated to have improved to 1.7 percent in 2018, contributed by acceleration in activity of both oil exporters and importers.

Growth among oil exporters is estimated to have strengthened in the year that just ended. Among the countries of the Gulf Cooperation Council (GCC), increased oil production and prices have eased fiscal consolidation pressures, enabling higher public spending and supporting higher current account balances. Among non-GCC oil exporters, anemic growth in Iran associated with US sanctions has been a drag on regional growth. Growth in Algeria is estimated to have accelerated to 2.5 percent in the year that just ended, supported by public spending.

Egypt, an oil importer, grew a faster 5.3 percent last fiscal year as tourism and natural gas activity continue to show strength, unemployment rate has generally fallen, and policy reforms progress. Favorable agricultural harvest and tourism helped support growth in Morocco and Tunisia in 2018, which are estimated to grow at a 3.2 percent and 2.6 percent rate, respectively.

Outlook: Regional growth is projected to rise to 1.9 percent in 2019. Despite slower global trade growth and tighter external financing conditions, domestic factors, particularly policy reforms, are anticipated to bolster growth in the region.

Growth among oil exporters is expected to pick up slightly this year, as GCC countries as a group accelerate to a 2.6 percent rate from 2 percent in 2018. Higher investment and regulatory reforms are anticipated to support stronger growth in the GCC. Iran is forecast to contract by 3.6 percent in 2019 as sanctions bite. Algeria is forecast to ease to 2.3 percent after a rise in government spending last year tapers off.

Egypt is forecast to accelerate to 5.6 percent growth in FY2019, as investment is supported by reforms that strengthen the business climate and as private consumption picks up. Growth for both Morocco and Tunisia are anticipated to reach 2.9 percent in 2019, sustained by policy reforms and improvement in tourism. Growth forecasts for the region are predicated on the assumption that geopolitical conflicts do not escalate significantly and regional spillovers from conflict-affected economies are limited.

Risks: Risks to the regional outlook are tilted to the downside. New conflicts in fragile economies can escalate and inflict even greater damage to incomes and economic activity, not to mention health and welfare; and may compound the impact of the refugee crisis on host and origin economies. Escalation of U.S.-Iran tensions would have adverse repercussions for the region. Geopolitical factors, combined with uncertainty about oil exporters’ oil production responses, could trigger volatility in oil prices. Lower oil price prospects could impact the region’s outlook, especially for the oil exporters, while it could help oil importers.

Tighter global financing conditions could affect oil importers and exporters in the region alike. High external debt denominated in foreign currency in some oil importers suggests these economies would be vulnerable to a sharp appreciation of the U.S. dollar.

On the upside, rising reconstruction spending in conflict-affected economies (e.g., Iraq) may have positive spillovers to neighboring economies. 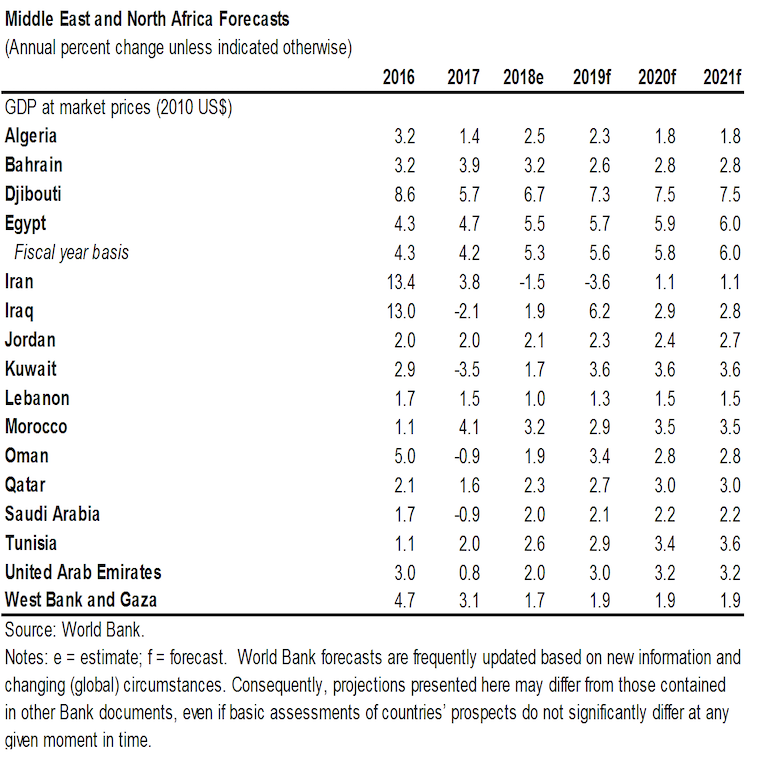