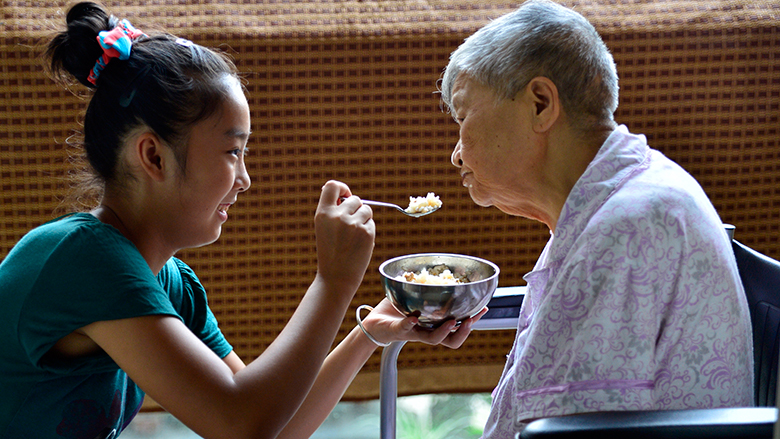 BEIJING, December 13, 2018—China is aging at an unprecedented rate. By 2050, 26 percent of China’s population is expected to be 65 or older, and about 8 percent will be 80 or older. To tackle this pressing challenge, China would require a balanced mix of services across home, community, and institutional settings that can best meet older people’s preferences and needs, according to a new World Bank report.

The report titled Options for Aged Care in China: Building an Efficient and Sustainable Aged Care System strives to identify a policy framework that fits the Chinese context and can be put in place gradually. The report describes the current landscape and challenges for elderly care in China, looking at both supply and demand for services. It reviews international experiences in long-term care provision, financing and quality assurance and assesses their relevance to China. Finally, it proposes policy options based on evidence and best practices.

“This report is aimed to help the government of China move from the broad strategic directions for aged care captured by the 13th Five-Year Plan and other government plans toward a concrete and coherent policy framework,” said Elena Glinskaya, World Bank Lead Economist and lead author of the report. “While the aged care systems of OECD countries and other developed economies in the East Asia region may provide useful examples, policymakers in China will need to develop a system that best suits the Chinese cultural, socioeconomic, political, and healthcare contexts.”

The report notes that China is experiencing one of the most rapid transitions to an aging society ever witnessed. It will move from being an aging to an aged society by 2027. In just 25 years, 14 percent of China’s population will be 65 and older, up from 7 percent in 2002. This transition took 115 years for France, 45 years for England, and 69 years for the United States.

Such rapid aging is putting pressure on China’s current informal and formal arrangements for elderly care. Traditionally, the family has been the primary source of care for older relatives in China. However, changes in family structure, economic development, and migration are eroding the easy availability of informal care for the elderly.

The Chinese government has recognized the need to strengthen formal aged care provisions and expand access to services,and adopted a range of strategies and policies specifically for aged care. However, the government still faces numerous challenges to developing an efficient and sustainable approach to aged care, including fulfilling its new role as a “steward”, rather than direct provider, of formal aged care services.

While continued government support is needed for those elderly who have limited functional ability and who are poor and vulnerable, the most effective and sustainable approach would be to leverage resources and complementary capacities from both the public and private sectors to create a functioning market for elderly care across income groups and across urban and rural areas, says the report.

“We hope this report will contribute to a deeper and more informed policy dialogue on how to best develop China’s aged care system and that it helps the government translate its strategies for aged care into concrete reforms that will result in effective, equitable, and sustainable support for China’s elderly,” said Bert Hofman, World Bank Country Director for China.

The World Bank is implementing an aged care project in Anhui province and also preparing a new aged care system development Program for Results (PforR) for Guizhou province.  Both projects enable piloting of innovative approaches identified in the report and should contribute to the development of a well-functioning market for elderly care services, where individuals can find services that meet their needs, preferences, and resource constraints.