Signing of New Project Will Benefit Over 200,000 Poor and Marginalized Farmers in Andhra Pradesh 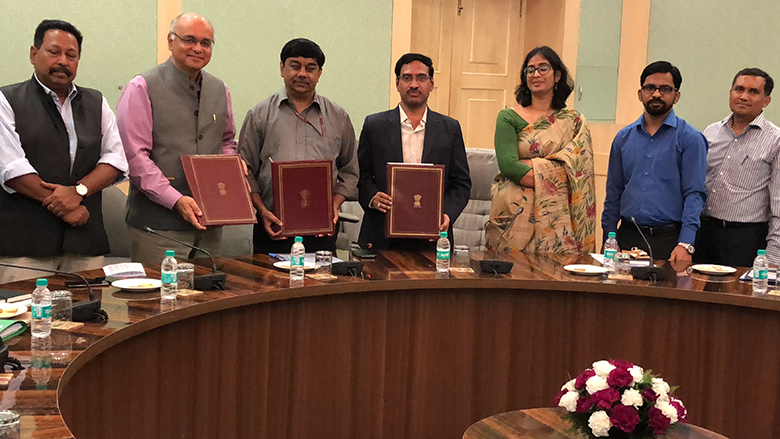 NEW DELHI, November 5, 2018 – The Government of India, the Government of Andhra Pradesh and the World Bank today signed the loan agreement for a $172.20 million project to enhance agricultural productivity, profitability, and climate resilience of poor and marginalized farmers in the state of Andhra Pradesh, while ensuring that farming continues to remain a financially viable activity.

The Andhra Pradesh Integrated Irrigation and Agriculture Transformation Project (APIIATP)will be implemented in rural areas largely dependent upon rainfed agriculture. It will strengthen the resilience of poor and marginalized farmers against adverse climate events by improving access to irrigation, drought seed varieties and post-harvest technology that are aimed at improving soil health, water-use efficiency and crop productivity.

. It will work with 1000 Small-Scale Community-Based Irrigation (SSCBI) systems spread over an area of 90,000 hectares (ha), covering over 1000 villages across 12 most climate vulnerable districts of Andhra Pradesh.

In recent years, climate variability has seriously affected agriculture in Andhra Pradesh, where farming is largely dominated by farmers with landholdings of less than two hectares. Farmers have low crop productivity and over 55 percent of farms are dependent on rainfall. Deterioration in the quality of natural resources has affected the state’s agricultural performance.

“Strategic shifts are needed for India to transform its agriculture into a modern and resilient system, where rural poor, largely dependent on rain-fed agriculture, is able to use more climate-resilient farming technologies and conserve water, a scarce resource,” said Junaid Ahmad, World Bank Country Director in India. he added.

To buffer against the vagaries of untimely rainfall and drought, the project will help modernize SSCBI systems to make them more resilient to climate change, build the capacity of the Water Users Associations (WUAs) to take the responsibility of delivering irrigated water through an integrated planning process and ensure efficient use of water for both surface and groundwater. It will also include an integrated weather forecasting system to provide weather-based crop advisories that can be scaled down to individual smallholder irrigation cluster areas.

To strengthen emerging value chains for climate-resilient agricultural commodities, the project will improve the capacity of Farmer Producers Organizations to operate as sustainable, market-oriented, agri-enterprises. It will help mainstream the climate resilient agriculture agenda in various local institutions that deliver agricultural services to the farming community.

India’s per capita emission of Green House Gases (GHG) is also on the rise, though current per capita levels of 2.44 tCO2 equivalent in 2012, is still among the lowest in the world. In absolute terms, the agriculture sector is the second largest contributor with around 18 percent of the country’s total GHG emissions. Enhanced soil-water conservation and climate-resilient farm management has the potential to help India reduce its GHG emissions significantly.

The $172.20 million loan from the International Bank for Reconstruction and Development (IBRD), has a 6-year grace period, and a maturity of 24 years.