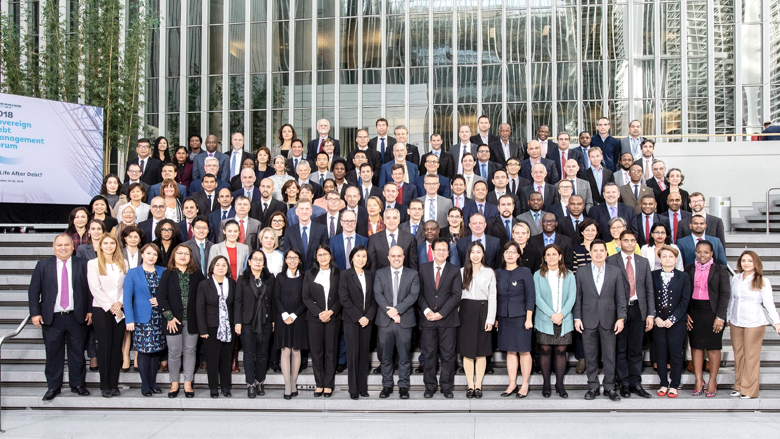 Washington, D.C. More than 180 global experts on debt management convened at the ninth Sovereign Debt Management Forum to discuss challenges and opportunities against a backdrop of record debt levels, normalization of monetary policies and an expected rise in interest rates. Discussions underscored that public debt management is even more critical than before.

In his opening remarks, Joaquim Levy, Managing Director and Chief Financial Officer of the World Bank Group, reminded the audience of the World Bank Group’s ever more critical role as an effective and reliable partner to influence development outcomes amid massive challenges in many parts of the world. He stressed that low interest rates in the wake of the global financial crises have fueled capital flows to developing countries in search for higher yields, but a normalization process is in effect now, which has made funding harder to obtain while debt, including corporate debt, has reached unprecedented levels. “If interest rates rise slowly, supported by strengthening growth, financing conditions and the capital flows to emerging market and developing economies will continue to be generally supportive. But even in this generally benign scenario, it is important that countries be prepared to build buffers to sail through the next 18 to 24 months of gradual global adjustments,” he said.

Rogoff emphasized that historically high global debt levels—combined with a strong dollar, capital outflows from emerging markets, and rising interest rates—will require sound debt management skills. He also pointed out the role technology may play in the future: “Massive future productivity growth from artificial intelligence should not be discounted just because effects are only beginning to be felt.”

Wheeler underscored the role of the public debt managers amid rising challenges such as record levels of global and government debt, slower global growth and possible recession in advanced economies, and greater political and economic complexities. Stressing the need for more active public debt management, he called on debt managers to proactively engage with central banks, fiscal policymakers and financial market regulators.

-Being prepared for a future where there will be a push for more transparency, especially around managing contingent liabilities, a need for accounting for the assets as well as the liabilities on the balance sheet, and an opportunity to better cater for the needs of the growing investor base, especially those who care about impact.

He said: “The World Bank Treasury will always be a connector, a clearing house for knowledge, a permanent forum of experiences and expertise to support public debt managers in the new era of heightened risk.”

The World Bank Treasury will organize the next Forum in 2020.