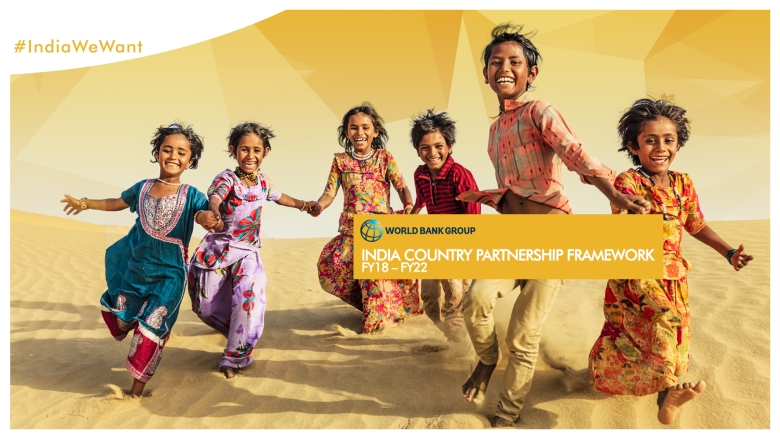 Support of $25-30 billion expected from IBRD and IFC over the next five years; increased focus on programmatic support to states

WASHINGTON, September 20, 2018 – The World Bank Group (WBG) Board of Executive Directors today endorsed a new Country Partnership Framework (CPF) for India which aims to support India’s transition to a higher middle-income country by addressing some of its key development priorities – resource efficient and inclusive growth, job creation and building its human capital.

The India CPF represents the largest country program of the WBG, reflecting the strong collaboration between India and the Group’s institutions: The International Bank for Reconstruction and Development (IBRD), International Finance Corporation (IFC) and Multilateral Investment Guarantee Agency (MIGA). The Group expects to deliver $25-30 billion during this CPF period, ending in FY2022.

“With a fast growing economy, global stature, and its unique experience of lifting the highest number of poor out of poverty in the past decades, India is well-positioned to become a high middle-income country by 2030,” said Hartwig Schafer, World Bank South Asia Vice President. “This CPF charts a path for how the World Bank, IFC and MIGA, will leverage their relative strengths to deliver stronger development outcomes for this dynamic country, half of whose population is under the age of 25.”

Welcoming the CPF, Subhash Chandra Garg, Secretary, Department of Economic Affairs, Ministry of Finance, Government of India said, “I complement the World Bank Group for aligning the CPF with India's development and investment objectives of high, sustainable and inclusive growth. I hope that the World Bank Group would be able to use their global experience and expertise in assisting India to achieve her objectives."

The CPF is underpinned by the Systematic Country Diagnostics (SCD), the World Bank Group’s comprehensive analysis of the opportunities and challenges for India to achieve poverty reduction and shared prosperity in a socially and environmentally sustainable way, and builds on extensive consultations with the government, the private sector, civil society and academic experts from across the country.

The WBG will focus on three broad areas under the new CPF: promoting a resource efficient growth path, particularly in the use of land and water, to remain sustainable; enhancing competitiveness and enabling job creation; and investing in human capital - in health, education, skills – to improve quality and efficiency of service delivery. Within these, some areas of deeper WBG’s engagement will include addressing the challenge of air pollution, facilitating jobs for women, increasing the resilience of the financial sector and investing in early years of children’s development.  Across the sectors, the WBG will invest in harnessing the impact of new technology.

The CPF has emphasized not only the areas of engagement but how the WBG will engage in India. The CPF highlights the shift from a “lending” to a “leveraging Bank”, emphasizing the growing potential and need to draw in capital markets in the financing of development priorities. Complementing transformational national programs, the Bank will also develop strategic state partnerships to address state-specific development priorities and support implementation capabilities at the state and local level.

“The future of India lies in the states of India. The country’s transition to high middle-income status will be determined in large part by the effectiveness of India’s federal compact,” said Junaid Ahmad, Country Director, World Bank India. “In this context, an important focus of the CPF will be to deepen engagement with India’s states and invest in the institutions and capabilities of the states and local governments to address their development priorities.”

The CPF also places emphasis on India’s global leadership role in promoting renewable energy and disaster resilient infrastructure development, which holds significant impact for India as well as the global economy. Through an initiative labelled “Lighthouse India” the WBG will leverage India’s development experience to support the development efforts of other countries especially in Africa and Central Asia.

The emphasis on a “leveraging Bank” is reflected in the CPF in the potential role of private sector finance and expertise to meet India’s development needs at scale.

“The Indian economy has evolved to a level where the private sector can be counted on to close large developmental gaps. Through this CPF, the WBG will help India leverage additional resources from the private sector to help India realize its full potential,” said Jun Zhang, Country Head, IFC, India.