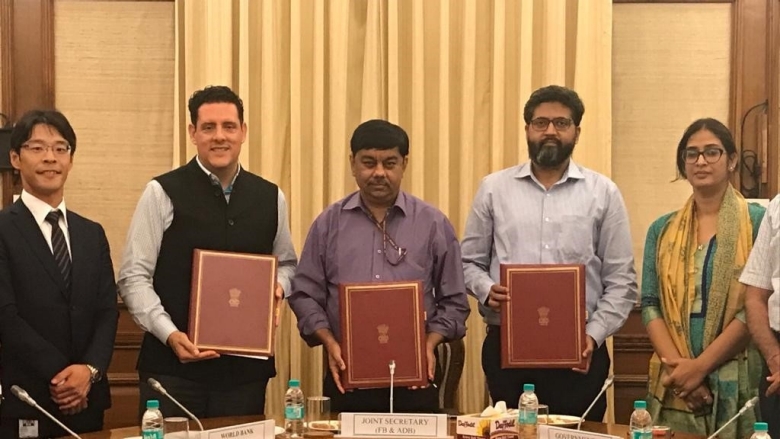 Over 24,000 trainees are expected to benefit at these ITI’s during the project period and about 40,000 untrained youth, including unemployed and unskilled workers will participate in industry-relevant short-term training programs which are compliant with the National Skills Qualifications Framework (NSQF). The NSQF is a quality assurance framework in India that lays down nationally recognized competency standards for all qualifications.

“The National Policy for Skill Development and Entrepreneurship has set a target of skilling 400 million new and existing workers by 2022,” said Sameer Kumar Khare, Joint Secretary, Department of Economic Affairs, Ministry of Finance.  “This Project is framed within the national policy and will help improve the quality and relevance of skills training, increase the number of skilled workers in the state, and complement national-level skills and training initiatives.”

“India’s continued economic growth demands more skilled workers across many sectors, and the demand for skilled labor by the industrial and service sectors has been rapidly growing in Uttarakhand,” said Jorge Coarasa, Acting Country Director, World Bank. “The Government of Uttarakhand is keen to develop a coherent and accessible skills development system in the state. This project will support them deliver quality training programs with a focus on imparting market relevant skills needed by the industry.”

Twenty-five ITI’s have been selected – 13 located in district centers and 12 ITI’s that are well-linked to industries. Two out of four women’s ITIs in the state will be included in the list. The priority ITI’s are expected to have a larger enrollment size, offer a wider variety of trades, have higher frequency and quality of interactions with industries, and ensure better equipment and infrastructure.

In Uttarakhand, of the 6.2 million people in the age group 15–59 years in 2010, 3.2 million participate in the labor force and 16 percent in wage employment.

One of the unique characteristics of workers in Uttarakhand is high mobility, which also contributed to the fast-economic growth of the state.  However, the overall job growth in the state has been negative since 2005 and the share of workers with salaried jobs remains quite low. The non-farm sectors of Uttarakhand’s economy are not creating enough jobs to absorb the growing size of its population that is not in school. This is especially so for the state’s women, whose participation in the labor force has been declining since 1994.

To catch up with the growing industry demands the state aims to increase the pool of skilled workers by 650,000 over the next five years.

According to government data, only 2.3 percent of the total workforce in India has undergone formal skill training, pointing towards a major challenge. This project, framed within the national policy, will specifically address the issues of low quality and relevance of teaching practices at ITIs. It will establish a new professional development culture of annual training to continuously develop the technical and soft skills of principals, foremen, and teachers and enable them to receive up-to-date industry knowledge. Training programs will include domain-specific training (both theoretical and practical), pedagogical or management training, soft-skills training, industry-based training, and competency-based teacher training.

Engagement between industries and ITI’s are also expected to increase. A cell will be established in each of the priority ITIs to manage all the industry liaison and job placement activities. ITIs and industries are expected to have diversified activities and more output-focused engagements such as campus recruitment, apprenticeship, and on-the job training.

For creating the right policy environment, a Skills Development Policy will be developed. It will cover the overall skills sector, including ITIs, higher skills (polytechnic and engineering colleges as relevant), short courses, industry-based and competency-based training such as the NSQF.

“ITI education is an important ticket to wage employment in today’s Indian labor market. The likelihood of workers with an ITI education having wage employment is higher than workers with only a secondary or higher secondary education,” said Shinsaku Nomura, Senior Economist and World Bank’s Task Team Leader for this Project. “Through several decades of engagement in the skills sector in India, the World Bank has accumulated knowledge of functional models of skills development from other states. Catalyzing interstate exchanges of knowledge and experience will also be an important contribution that the World Bank hopes to make,” he added.

The $74 million loan, from the International Bank for Reconstruction and Development (IBRD), has a 5-year grace period, and a maturity of 17 years.