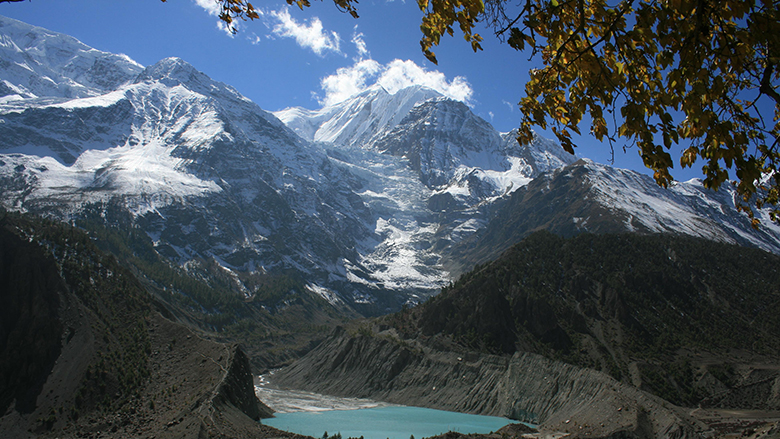 Gangapurna Himal Glacier and lake in Manang district of Nepal.

KATHMANDU, September 17, 2018—Recognizing the risks posed to their water resources and ecosystems, senior government officials from Afghanistan, Bhutan, India, Nepal, and Pakistan today agreed to launch a regional network to boost their mountain economies and combat glacier and snow melt caused by climate change and air pollution across the region.

The launch of the Hindu Kush Himalaya Glaciers and Mountain Economy Network took place at a two-day conference jointly organized by the Ministry of Forests and Environment, Government of Nepal, the World Bank, and the Centre for Green Economy Development, Nepal (CGED-N). The International Centre for Integrated Mountain Development (ICIMOD was the co-convener. This event served as the inaugural meeting of the Mountain Economy agenda of the World Bank’s South Asia’s Regional Ecological Integrity Platform (REIP).

Joined by scientists and climate champions, delegates from five South Asian countries agreed on a set of principles to better maintain the snow covers and glaciers that span their mountain ranges and serve as a valuable source of energy, water, and food for millions of people living in downstream areas.

“South Asia is home to the largest glaciated area outside of the poles, and the region shares many common challenges related to climate change and glacier melting,” said Shakti B. Basnet, Nepal’s Minister of Forests and Environment. “Greater cooperation with our South Asian neighbors will bring the solutions we need to keep our Himalayan glaciers healthy, boost our mountain economies, and make our communities more resilient to climate change.”

South Asia is highly dependent on water provided by Himalayan glaciers and thus vulnerable to rising temperatures that trigger snowmelt. During the past century most of the Himalayan glaciers have been shrinking and, between 2003 and 2009, lost an estimated 174 gigatons of water each year at a rate faster than the global average. Projections of climate change for the region suggest that rising temperatures will continue to impact snowmelt and affect water supply for all countries.

In addition to global change, soot --or black carbon--emitted in part from industry, motor vehicles, coal-fired power plants, and firewood used for cooking and heating is a significant contributor to glacial melting in South Asia. By darkening snow and ice covers, black carbon decreases the reflecting power of glaciers, rising air temperatures and accelerating further glacier melting. In India alone, black carbon emissions increased by 61 percent between 1991 and 2001.