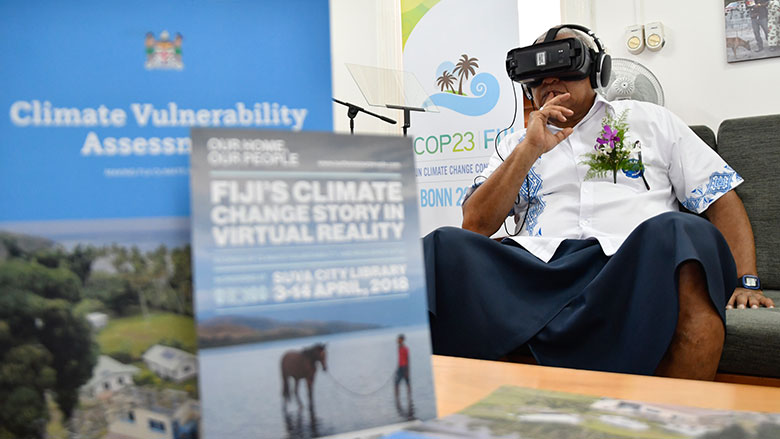 SUVA, April 4, 2018 – The Virtual Reality climate change project that shared Fiji’s climate change story with global leaders at COP23 has returned home to Fiji, with thousands expected to see the film in the coming weeks.

Our Home, Our People (www.ourhomeourpeople.com) is being presented at the Suva City Library until 14 April, and was launched by the Prime Minister in Suva today. The VR film project has already been seen by more than 600,000 people worldwide, including many global leaders at COP23, and was recently named as a finalist in the United Nations’ Sustainable Development Goals (SDGs) Action Awards. The project is funded by the World Bank’s Global Facility for Disaster Reduction and Recovery and the European Union, through the ACP-EU Natural Disaster Risk Reduction Program

“This film and its characters convey, through the truly immersive experience of Virtual Reality, the message that we have long aimed to share with the world: that we Fijians are not standing still and accepting the realities of climate change; rather that we are resilient; we are coming together with strength to support each other and build our communities through these challenges,” said Fijian Prime Minister and President of COP23, the Hon. Frank Bainimarama.

"[The VR film] was one of the highlights of the Fiji Pavilion at COP23, [and] I urge as many Fijians as possible to try to see it. Because it is genuinely brilliant,” the PM added.

Ambassador Julian Wilson, Head of the EU Delegation for the Pacific, noted the emotional power of this film, and its story appeals to any community across the globe fighting climate change. "This global appeal is exactly what the spirit of the talanoa dialogue seeks – stories that will spread and spark the discussions and accord that will be needed if we are to make a difference in the fight against climate change," said Ambassador Wilson.

Lasse Melgaard, the World Bank’s Resident Representative for the South Pacific, thanked the communities across Fiji who had committed so much of their time and hearts to the project.

“We are incredibly grateful to the communities of Ra and Vunisavisavi, who shared their lives with our team for this story, and we are so pleased to be able to finally bring their story ‘home’ to Fiji – to allow thousands of Fijians to experience this powerful, moving story in its true 360-degree format.”

He added said the film was a powerful way of sharing the findings of sharing the findings of the Fiji Climate Vulnerability Assessment: Making Fiji Climate Resilient, the report launched at COP23 that provides a deep-dive analysis of the economic and social impacts of climate change on Fiji over the coming decades, and provides a set of recommendations as to the most effective investments to adapt and minimize its impacts.

The ‘return tour’ will also include a series of community events to be held at the communities whose stories are featured in the film, including Nabukadra and Naramai (Ra Province) and Vunisavisavi (Cakaudrove Province).