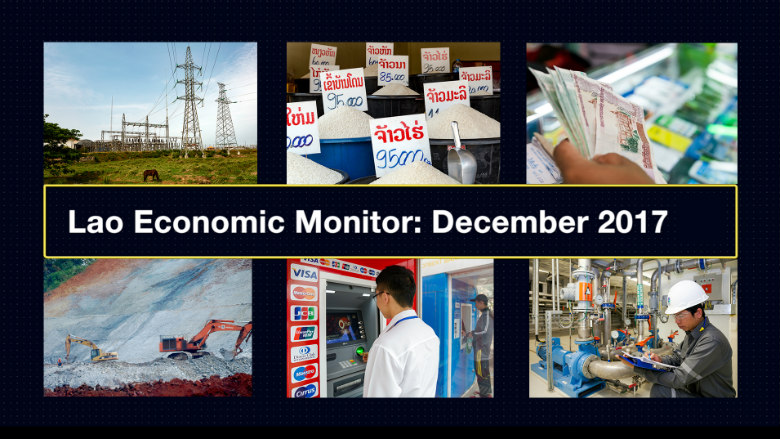 VIENTIANE, December 11, 2017 —Continued economic growth, forecasted at 6.7 percent for 2017, can help Lao PDR further reduce poverty, which is projected to decline to 13 percent in 2017, according to the latest edition of the World Bank’s Lao Economic Monitor, released today.

Though economic expansion is moderating slightly from recent averages of 7 to 8 percent, the economy continues to be driven by growth in power generation, manufacturing, and agriculture. Improved exports are expected to drive job creation and continued poverty reduction.

Stable food prices and slowing demand, which offset a gradual recovery in oil prices, have led to lower inflation. Economic management has been broadly adequate with government expenditures adjusted in response to revenue shortfalls and greater flexibility in the exchange rate.

“Lao PDR has consistently maintained high economic growth for the past decade, which has enabled thousands of families to leave poverty,” said World Bank Country Manager for Lao PDR, Jean-Christophe Carret. “Stronger macroeconomic management and reforms to improve the business climate and create a vibrant private sector will help the country sustain growth and poverty reduction.”

The medium-term outlook remains mainly favorable, with growth expected to ease further before picking up in 2019-2020, as the large power projects begin operations. Lowering macroeconomic vulnerabilities and improving the business environment will be critical to maintaining the positive outlook, as is strengthening management of the power sector, a sector highlighted by the report.

The power sector has played a major role in the country’s development over the past two decades, by boosting growth through investments, generation of affordable energy, and higher export earnings. Risks related to the financial sustainability of this sector may be mitigated through better system planning and project selection processes, securing well-paying markets for electricity exports, and improving commercial operations and organization of public utilities.

The Lao Economic Monitor is a periodic publication developed by the World Bank office in Lao PDR.