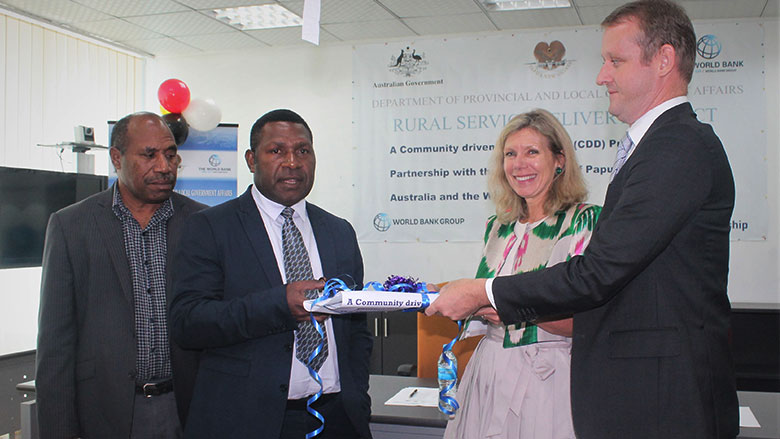 PORT MORESBY, November 2, 2017 – The Rural Service Delivery Project was officially launched today to support 19 Districts across 5 Provinces improve community access to basic infrastructure and services. The ceremony, held at the Department of Provincial and Local Government Affairs (DPLGA), was attended by the Minister for Inter-Government Relation Hon. Kevin Isifu, and representatives from the Australian High Commission, the World Bank and line government agencies.

“This project will work with communities to develop and deliver the services most needed for their circumstances,” said Minister for Inter-Government Relation Hon. Kevin Isifu. “We welcome today’s launch and the start of this project, which is targeted at rural areas, where 80% of our people live.”

“Australia’s contribution to the next phase of the Rural Service Delivery Project is an important element of our partnership with Papua New Guinea on decentralization for improved service delivery,” said Minister Counsellor for Governance, Rod Hilton, representing the Australian High Commission. “Australia’s support will increase the number of grant available to rural wards. At least half of the Australia funded grants will be allocated to priorities identified by women.”

The project will provide two rounds of Ward Development Grants to rural wards which can be used for a wide range of small-scale social or economic investments and/or services. Rural wards will identify their development priorities and be responsible for the design, implementation, and maintenance of their investments, as well as reporting on the use of the funds

A pilot project was implemented in Central and Western Provinces which this project will build on and expand. Implemented over the last four years, 58 sub-projects were completed, including the building of classrooms, aid posts, water supply systems, solar electricity, community halls, and a footbridge.