Countries should address growth constraints with policies and reforms

WASHINGTON, October 8, 2017 –  After leading global growth for two years, South Asia has fallen to second place, after East Asia and the Pacific. The region’s slowdown is due to both temporary shocks and longer-term challenges. Regional economic growth is expected to slow to 6.9 percent in 2017 from 7.5 percent in 2016, but growth could rebound to 7.1 percent in 2018 with the right mix of policies and reforms.

The just released twice-a-year South Asia Economic Focus (SAEF) finds that the slowdown in South Asia has mostly been driven by internal factors, most notably in India, such as a decrease in private investment, and an increase in imports and government spending. This edition, Growth out of the Blue, explores the potential of night-time light satellite imagery to improve measurement and understanding of economic activities.

“While growth rates in South Asia largely remain robust given the economic shocks that some countries in the region have faced, countries should continue to actively address their growing trade and fiscal deficits,” said Annette Dixon, the World Bank South Asia Region Vice President. “With the right mix of policies to respond to challenges, we remain confident that South Asian countries can accelerate their growth to create more opportunities and prosperity for their people.”

Given its weight in the region, India sets the pace for South Asia. Its Gross Domestic Product (GDP) growth is expected to slow down to 7.0 percent in 2017, due to surging imports and declining private investment along with the effects from withdrawing large amounts of banknotes and the introduction of the Goods and Services Tax (GST). However, India’s growth is expected to rebound to 7.3 percent in 2018.

Pakistan continues its upward growth performance with economic activity expected to accelerate to more than 5 percent this and next year, if deficits are well-managed and external stability is maintained. Nepal has seen an economic rebound after the earthquake and trade disruption in 2015, but growth is moderating this year. In Bangladesh, industrial production continued to accelerate, export growth slowed, and fiscal deficits increased. Overall, South Asian economies stand to gain from continued recovery in advanced economies, which are their largest export markets.

The report also highlights that South Asia was once at the cutting edge in economic measurement and analysis, pioneering techniques such as the use of household surveys. With the rise of big data, traditional ways to measure economic phenomena like prices and GDP can be supplemented. To improve economic measurement in South Asia, a greater reliance on big data may help, but a clear agenda toward stronger statistical systems is a necessity.

“We’re very excited about the potential of adopting new sources of data to improve our understanding of economic activity. Nightlight data, for instance, is easy to obtain, regularly updated, and very informative,” said World Bank South Asia Region Chief Economist Martin Rama. “In this report, it allows us to shed light on recent episodes and to provide a new perspective on how policies and shocks impacted the region, down to the local level.” 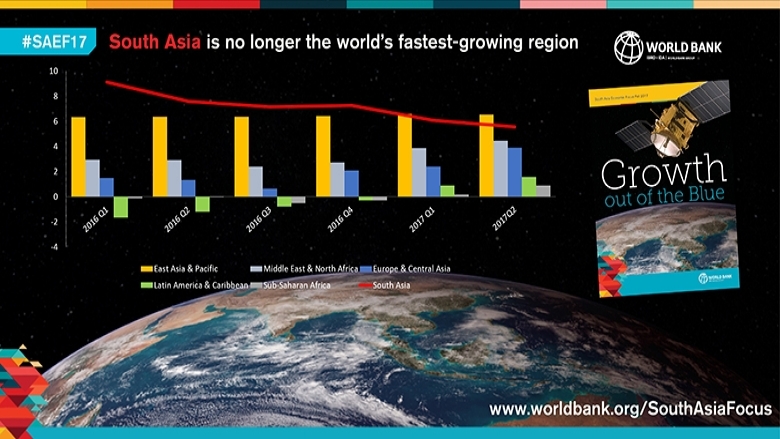 Factsheet: Many South Asian Countries Have Potential to Accelerate Growth

Afghanistan’s economic recovery remains slow with continuing insecurity curbing private investment and consumer demand. Growth is projected to accelerate slightly from 2.6 percent in 2017 to 3.4 percent in 2018. However, with population growth of nearly 3 percent, such a level of economic growth means minimal income per capita growth. Sustained economic growth requires transforming the economy through better health and education, improved agriculture, and the development of the country’s mining resources.

The economy in Bangladesh remains strong with accelerating industrial production and resilient services.  However, growth is expected to moderate this year. Deficits are widening as export growth and remittances have weakened, which should be monitored and addressed along with increasing stresses on the financial sector and uncertainties around the upcoming elections.

Economic activity in Bhutan has kept growth strong with the economy expected to grow at 6.7 percent in 2017 and 6.9 percent in 2018. Hydropower projects, supportive policies combined with low inflation, a stable exchange rate and greater financial reserves have contributed to growth and poverty reduction. However, risks are emerging, including possible delays in hydropower construction and the slowdown in growth in India.

India’s economic momentum has been affected from disruptions from the withdrawal of banknotes and uncertainties around the GST. Growth is expected to slow from 8.6 percent in 2015 to 7.0 percent in 2017. Sound policies around balancing public spending with private investment could accelerate growth to 7.3 percent by 2018. While sustained growth is expected to translate to continued poverty reduction, more focus could be made to help benefit the informal economy more.

In Maldives, GDP growth has rebounded to nearly 5 percent as the government embarks on several major infrastructure projects to help move Maldivians to the capital city Malé. Construction is expected to be a key driver of growth, with tourism also recovering. The country could better align economic activity with providing more employment opportunities, and better health as well as education services. In addition, it needs to prepare for the impacts of climate change.

Nepal has seen an impressive economic recovery after disruptions from earthquakes and a trade blockade. Economic activity rebounded to 7.5 percent in 2017 through increasing government resources, spending, and remittances from abroad. Growth is expected to slow in 2018 due to the heaviest floods in decades, slow recovery of exports, and an increase in lending rates.

In Pakistan, economic growth is expected to accelerate to more than 5 percent this and the next years if the country’s fiscal deficits are well managed and external stability is maintained. Efforts to reverse the trade and fiscal imbalances and continued implementation of reforms will be needed for sustaining and accelerating growth and improving welfare.

Sri Lanka’s economic growth is projected to grow at 4.6 percent in 2017 and achieve 5 percent growth in the years ahead. Public finances and reserves have improved despite a high budget deficit and public debt. Frequent natural disasters continue to weaken economic performance and are likely to increase poverty. Accelerating reforms to promote competitiveness, better governance, and a more balanced budget are critical to ensure sustained growth and development. 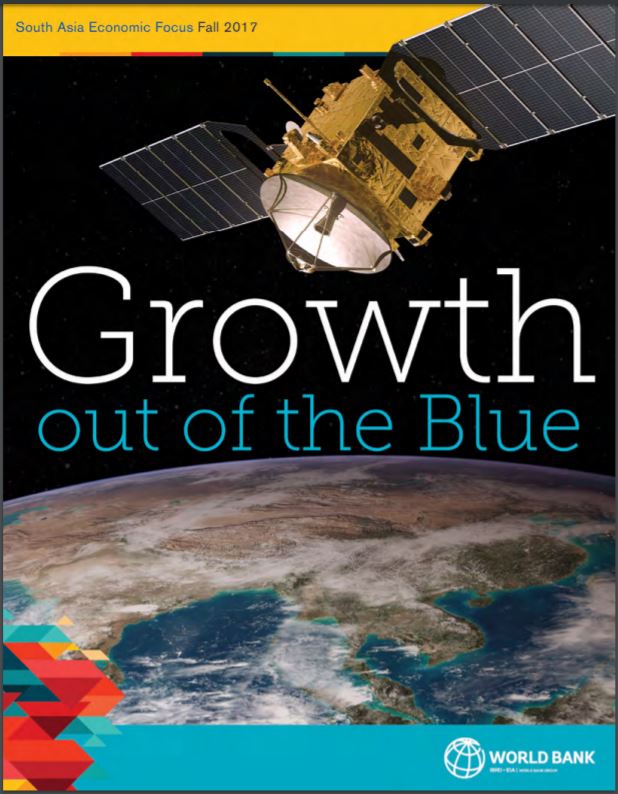